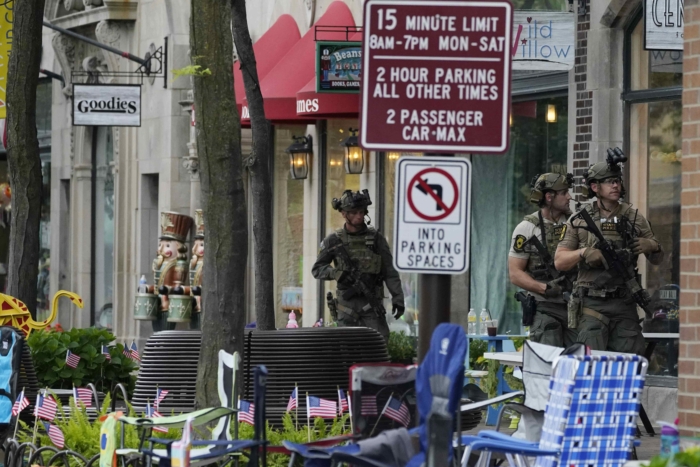 Law enforcement search July 4 for the gunman after a mass shooting at the Highland Park Fourth of July parade in downtown Highland Park, Ill., a Chicago suburb. Photo: Associated Press

[Episcopal News Service] Trinity Episcopal Church in Highland Park, Illinois, hosted an online service of lament on July 4, the evening after a gunman opened fire on an Independence Day parade in the northern suburb of Chicago, killing six people and wounding about two dozen others. A 21-year-old man is in custody after a police manhunt.

The Rev. Paula Clark, bishop-elect of the Diocese of Chicago, and the Rt. Rev. Chilton Knudsen, assisting bishop, issued a message to the diocese after the rampage, saying their “hearts are broken” at the news. They also highlighted the gun violence that continues to plague Chicago, including 57 people shot over the long holiday weekend, at least nine of them fatally.

“Despite their great numbers, these deaths and the poverty and systemic racism that fuel them are often lost in the conversation about gun violence as our nation lurches from one mass killing to another,” Clark and Knudsen said. “Please, in the hours after this horrifying event, as this violent weekend draws toward an end, keep yourself safe, and join us in prayer.”

The man taken into custody in the Highland Park investigation, Robert E. Crimo III, has been described by police so far only as a “person of interest.” Authorities have given no indication yet of a possible motive behind the attack. The “shooting appears to be completely random,” Lake County Sheriff’s Deputy Chief Christopher Covelli said in a news conference on July 5.

Police said the shooting in Highland Park, Illinois "appears to be completely random.”

"We have no information to suggest at this point it was racially motivated, motivated by religion, or any other protected status." pic.twitter.com/kHSfxS6Eo5

This latest mass shooting and the high rate of gun violence in Chicago has further amplified Americans’ concerns following two months of deadly rampages in the United States. On May 14, a gunman killed 10 at a grocery store in Buffalo, New York. On May 24, a gunman killed 19 children and two teachers at an elementary school in Uvalde, Texas. On June 16, a gunman killed three parishioners at an Episcopal church potluck in Vestavia Hills, Alabama.

During that same time, in a country where firearms outnumber citizens, the federal response to gun violence pushed in two opposing directions. On June 23, the Supreme Court expanded the rights of gun owners to carry firearms in public by striking down a New York law. Two days later, on June 25, President Joe Biden signed a bipartisan bill that that has been praised for directing the most significant new federal gun safety measures in nearly 30 years.

“The Episcopal Church has advocated on gun reforms since at least the 1970s, and that advocacy continues today,” Rebecca Blachly, director of the church’s Washington, D.C.-based Office of Government Relations, said in a June 28 webinar hosted by Bishops United Against Gun Violence.

Blachly’s office advocates for church policy positions that have been approved by General Convention. A General Convention resolution from 1976 supported “federal, state and local legislation aimed at controlling the sale and use of hand guns” and a 2015 resolution urging lawmakers to pass laws requiring permits for citizens to carry concealed weapons.

When the 80th General Convention convenes July 8-11 in Baltimore, Maryland, bishops and deputies are set to consider several resolutions related to gun violence, including Resolution B006, advocating passage of state-level gun safety legislation.

Blachly also suggested Episcopalians sign up to receive alerts from the Episcopal Public Policy Network, which coordinates efforts to contact members of Congress and urge them to pass legislation addressing the crisis of gun violence and other issues.