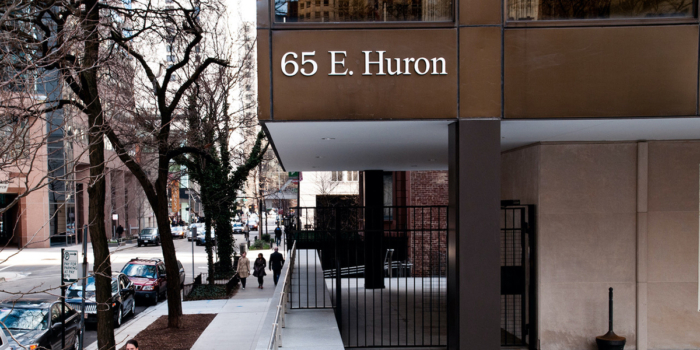 [Episcopal News Service] The Episcopal Diocese of Chicago’s decision to list its headquarters in downtown Chicago for sale is drawing the ire of the building’s next-door neighbor, St. James Cathedral.

The main goal of the sale is to assure the long-term financial viability of the diocese, the diocese’s Bishop and Trustees group, which holds title to and oversees the use of the real property used by the missions of the diocese, said last month. In recent years the $5.1 million diocesan budget has been balanced by drawing from invested money known as the Bishop’s Funds. That money is projected to be used up by 2025, prompting the sale.

The building at 65 E. Huron St. called St. James Commons costs $750,000 a year to operate. When then-Bishop Jeffrey Lee announced in 2020 that the diocese was preparing to sell the building, he called that annual cost an “increasingly unsustainable burden on the diocesan operating budget,” especially, he said, because the reconfigured diocesan staff is using less and less space in the building. Maintaining St. James Commons accounts for 10 percent of the diocesan budget.

Cathedral leadership and the Bishop & Trustees consulted about the plan to sell the property, but they disagree about the fruitfulness of those conversations. Because of the details of the property relationship between the cathedral and the diocese, the cathedral leadership warns that the terms of the sale could leave it “dramatically disadvantaged, and quite possibly facing closure” without enough money to cover the cost of being severed from the building.

The site, commercial real estate services and investment company CBRE says in its listing, includes 22,260 square feet of land “at the junction of Chicago’s premier River North and Streeterville neighborhoods.” Mattson told ENS that the diocese anticipates that, because of the air rights available at the site, a developer would build a much taller building on the property. He predicted St. James Common would be razed and a future building would house rental apartments.

The five-story late-midcentury modern-glass structure is a block off North Michigan Avenue, known as the Magnificent Mile, “central to many of Chicago’s cultural, recreational, entertainment, and shopping attractions” and on a “tranquil urban street well-suited to luxury living and premier amenities,” according to the for-sale listing. River North is considered one of Chicago’s most luxurious neighborhoods.

The building “is the diocese’s largest asset and offering it for sale brings us one step closer to creating a fund that will support the entire diocese’s mission,” Mike Mattson, Bishop and Trustees second vice president, said at the time of the announcement. “All of our parishes and missions will benefit from this move.”

The listing notes that “a portion of the space, currently used by St. James Cathedral, will have to be replaced in the redevelopment of the site.”

The asking price is not included in the listing and Mattson declined to disclose it to Episcopal News Service. He said Bishops and Trustees are confident they will get a good price, even given the current state of the economy. Thus, Mattson said, the Bishops and Trustees believe the cathedral will “have plenty of money,” especially given that the cathedral has nearly $9 million in investments and has also begun a $16 million capital campaign that includes $11 million for building restoration and $4 million for a new organ.

St. James Cathedral’s chapter and dean disagree with that prediction, despite being promised a percentage of the sale price. “St. James would face a potentially profound – and possibly dire – dilemma if the final parameters of the sale adhere to the terms that Diocesan leaders have arbitrarily imposed on our community,” the cathedral leadership said recently told the congregation. “Simply put, the proposed terms of the sale would unilaterally assign new cost burdens to St. James without providing revenues commensurate with those obligations.”

The obligations, they said, include “full responsibility for the hefty cost of deferred maintenance of the Cathedral building,” which the leaders said the diocese should have been more willing to perform in partnership with the cathedral. The cathedral would also have to replace heating and cooling systems that would be lost during the demolition of St. James Commons along with the ADA-compliant access to the building and elevator, and its parish hall and office space.

The Very Rev. Dominic Barrington, the cathedral dean, told ENS that the pending sale is “destabilizing our ability to mount a capital campaign” because many prospective donors also gave to a campaign to remodel St. James Commons in 2013-2014. Comparing the plan to list the building to “selling the family silver,” Barrington said he doubts that the cathedral will get as much money from the proceeds as the Bishops and Trustees think they will.

“On the basis of the expert advice, we have received about the value [of the property] we realize that the percentage of the sale that we will receive means we have no viable future,” he said.

The cathedral would take back the title to its building after the sale and that would also leave it with all the deferred-maintenance costs, Barrington said. “The trustees have allowed very substantial deferred maintenance to build up on the cathedral church in terms of major renovation on the stonework, and a new roof,” he said. “The total sum of that is way more than the money that we will have.” Thus, his prediction that the cathedral might not remain viable.

Mattson told ENS that the diocese had some work to make sure that the building was secure. “The cathedral is actually in pretty good shape,” he said, adding that he did not think the deferred maintenance is any more significant than that facing many other churches.

This is not the first time the diocese has listed the property for sale. It attempted to sell it in the mid-2000s. The Arizona-based Canyon Ranch resort company had been in partnership with a developer to build a 60-plus-story “urban resort” with high-end condominiums at 65 E. Huron St. Those plans were scuttled during the 2008 Great Recession.

Meanwhile, Lee retired as diocesan bishop in late 2020 and is now serving as provisional bishop to the north in the Diocese of Milwaukee, and his successor Bishop-elect Paula Clark is set to be consecrated in September.

On June 21, the Cathedral Chapter, composed of elected lay and clergy leaders, told Bishop and Trustees in a memorandum that the final terms around the sale had been “unilaterally imposed” on what they called “a vibrant and growing parish which is the largest single contributor to the diocesan common mission share” budget.

“We have sought alignment with B&T since well before the announcement of the sale of the
property to try and avoid the deeply unfortunate situation in which we now find ourselves,” they said. “The Cathedral Chapter is taken aback at B&T’s apparent resolve to move forward in a way that, in all probability, will leave St. James Cathedral dramatically disadvantaged, and quite possibly facing closure.”

Mattson, of the Bishop and Trustees, said a press release that the cathedral sent to media outlets the next day was “a little bit of drama” that he wished had not been played out in the press. “If we have a good sale, they will get a lot of money from it,” he said. “I think at this point, it’s just the uncertainty is causing them trepidation.”

He added that the decision to sell the property is larger than even the diocese and St. James. “As we go forward, as a denomination, we need to figure out how we’re going to fund ourselves and what ministries are important,” he said. “We have this asset that has been really unused, and it’s time to monetize it.”