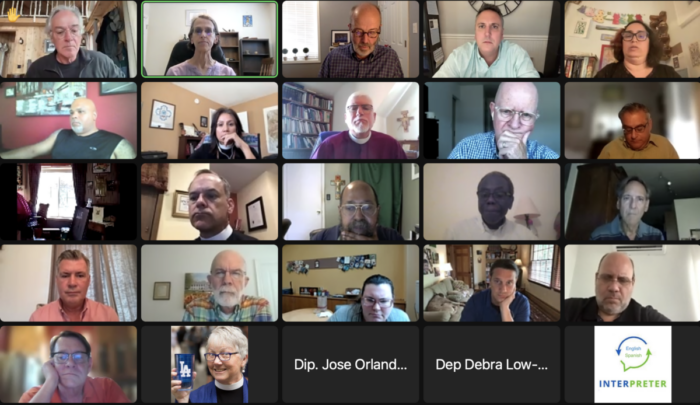 [Episcopal News Service] At their meeting on June 27, the Prayer Book, Liturgy & Music committees narrowed down the large number of proposed resolutions before them into a few that will go before the 80th General Convention, July 8-11 in Baltimore, Maryland. The committees consolidated, deferred or rejected some of the more high-interest resolutions, including open Communion and feast days for Bishop Barbara Harris and others, but adopted resolutions addressing liturgical language that could be interpreted as antisemitic or racist.

The proposed resolution that had attracted perhaps more interest than any other – C028, which would have repealed the canon restricting the Eucharist to those who have been baptized – ultimately died without much debate. Two people testified against the resolution proposed by the Diocese of Northern California, both referencing the sacramental arguments against open Communion that have been raised by theologians over the past month.

“The resolution as I read it is admirably rooted in a theology of hospitality. I worry, however, that the hospitality it offers is a cheap hospitality,” said Tyler Sampson, a lay preacher and theological student from the Diocese of Washington. “Baptism is no dinner ticket to Communion, but entry into the life in Christ.”

Bishops and deputies voted to take no action on C028, effectively killing it. Bishops’ and deputies’ committees have distinct rosters and vote separately, but they often meet together for hearings and deliberations on resolutions.

The committees had received 16 resolutions from across the church proposing to honor Harris with a date on the church’s Lesser Feasts and Fasts calendar. Harris, who became the first female bishop in the Anglican Communion when she was consecrated bishop suffragan in the Diocese of Massachusetts in 1989, died on March 13, 2020. The calendar’s current guidelines specify that feast days for people of exceptional faith may be added (or deleted) with the concurrence of two consecutive General Conventions, generally after widespread support for the person’s inclusion over 50 years.

Resolutions had also been put forth to add to the calendar other people who have not been dead for more than 50 years, including Black civil rights leaders Rep. John Lewis and Howard Thurman. The Rev. Jim Richardson, alternate deputy from the Diocese of Northern California, testified that this time limit has been waived before, in the cases of the Rev. Martin Luther King Jr. and the Rev. Oscar Romero, and argued that Harris, Lewis and Thurman should be given the same treatment.

“In this very grim, sad time we are in, we need all the saints, heroes and icons of the faith we can get now, not 50 years from now,” Richardson said.

In deliberation, however, the committees passed a substitute resolution that directed the Standing Commission on Liturgy and Music to compile the appropriate historical and biographical materials and present them to the 81st General Convention in 2024.

“I think we agreed that it’s too soon to do this,” said James Steadman, vice chair of the deputies’ committee. “The time is not yet come. We have established a process by which people will be recognized and by moving this matter in this way, we are transmitting information … that we regard it as extremely important.”

The committees also passed a resolution to appear on the consent calendar at convention – where it will be considered and voted on along with other legislation as a single business item – to remove William Porcher DuBose from Lesser Feasts and Fasts. DuBose was a priest, seminary professor and officer in the Confederate army during the Civil War. His family once owned hundreds of slaves, and long after slavery was abolished, DuBose defended white supremacy in his writings, even praising the early Ku Klux Klan. If approved by convention, this would likely be the first time a person has been removed from the calendar.

Among the other resolutions passed by the committees was A126, which would instruct the SCLM to scan the language in the Book of Common Prayer, The Hymnal 1982 and other approved liturgical materials for “colonialist, racist and white supremacist, imperialist and nationalistic language” as it carries out its revisions, seeking the input of Episcopalians from various ethnicities and countries.

Similarly, the committees passed two resolutions dealing with perceived antisemitic language in liturgies and lectionaries. C030 would direct the SCLM to identify language in all authorized lectionaries that has been interpreted as antisemitic and report its findings to the 81st General Convention, proposing alternatives to those passages. D058 would approve for trial use an alternate Good Friday liturgy with a revised translation that offers other language options as an alternative to the repeated use of the phrase “the Jews” in the Gospel of John’s Passion section, which has historically been used to blame the entire Jewish people for the death of Jesus. One option already used by some churches is “the Judeans,” referring specifically to the authorities in Jerusalem.

The 80th General Convention initially was to take place in 2021 but was postponed a year due to the COVID-19 pandemic. Church leaders finalized a plan earlier this month to scale down the July meeting due to the continued threat of COVID-19 outbreaks. Legislative committees have been holding online hearings on resolutions since February.