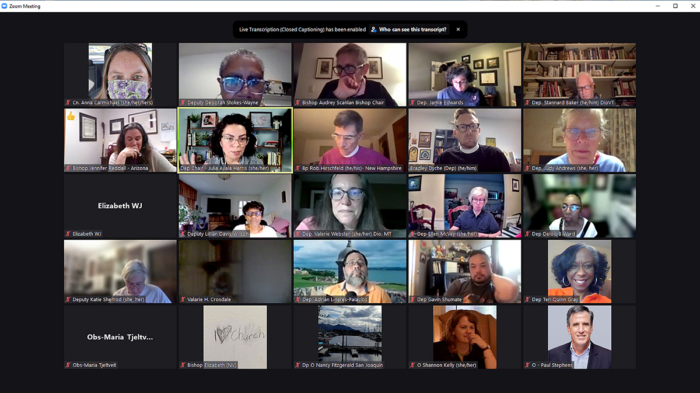 [Episcopal News Service] The legislative committees on Sexual Harassment, Sexual Exploitation, & Safeguarding June 22 recommended that seven resolutions be adopted by General Convention when it meets July 8-11, ranging from the types of translations to be required for online Safe Church training to observances to mark the fight against gender-based violence.

The committees previously had heard testimony on five of the resolutions, so it first offered the chance for people to speak on two resolutions that recently had been assigned to these committees.

One of them, C064 calls on the church to observe “Break the Silence Sunday” on the Sunday closest to Nov. 25, which is the International Day for the Elimination of Violence against Women. Speaking in support of the resolution was the Rev. Sereima Lomaloma of Fiji, in the Diocese of Polynesia and part of the Anglican Church of Aotearoa, New Zealand and Polynesia. Lomaloma is an advocate for gender equity and a member of the Anglican Communion Safe Church Commission. She noted that Fiji has marked this observance since 2013 and urged adoption as a way for the church to stand publicly with those who have been victimized by gender-based violence. She said, “For too long the church had been accused of being a gatekeeper, of condoning violence because of their silence,” but a public witness tells survivors “that they are believed, they are loved, they have value, that the church is creating a space where they can feel safe about sharing their story, and that the church is honoring their courage and their resiliency.”

After hearing a discussion about how Episcopal churches could observe this day when it also falls on observances like the first Sunday in Advent, the committees voted to recommend adoption, and deputies voted to place it on the House of Deputies’ consent calendar.

The other new resolution, C063, encourages Episcopalians to wear black on Thursdays, as part of the World Council of Churches campaign for a world without rape and violence. The Rev. Gavin Shumate, deputy from Oregon, said that as a priest he wears black clerical clothing every day but noted that a “Thursdays in Black” pin is available for those in his situation to note their participation. Deputies and bishops voted to recommend adoption by General Convention, with this also going on the deputies’ consent calendar.

Resolution A061 originally called for a change to the annual parochial report filed by every congregation in The Episcopal Church to include demographic information on the gender, age and race of those in local leadership. The resolution was proposed by the Task Force to Study Sexism in The Episcopal Church and Develop Anti-Sexism Training, which found lack of information an impediment to researching sexism, according to task force and committee member Katie Sherrod of North Texas.

The committees wanted additional information to be gathered, including gender identity and expression, ethnicity, sexual orientation and disability status. Because as committee members reflected on the fact that many of these categories aren’t necessarily known to those who complete the parochial report, they voted to amend the resolution to require Executive Council to come up with a mechanism for gathering this data. The committees then voted to recommend this be adopted, also placing it on the House of Deputies’ consent calendar.

Resolution A065 deals with translating new Safe Church training modules into languages other than English. Seeking to make the materials as widely available as possible, the committee amended the resolution to expand the required translations beyond Spanish, French and Haitian Creole to include sign language interpretation in each of the three designated languages, as well as closed-captioning for video components. Members noted that translating the materials into languages other than English that are spoken across The Episcopal Church requires more than transliteration, and translations need to reflect the local cultural context. The resolution calls on Executive Council to create a new task force to have oversight of these translations. The committee recommended this resolution be adopted with committee amendments, but members felt it would need to be discussed by the House of Deputies and the House of Bishops so did not place it on the consent calendar.