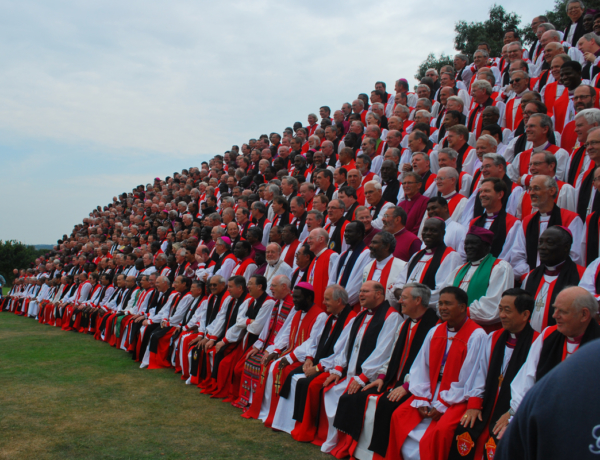 The bishops at the 2008 Lambeth Conference of bishops pose for the traditional group photo. Photo: Anglican Archives

[Episcopal News Service] With the 15th Lambeth Conference scheduled this summer, Archbishop of Canterbury Justin Welby is seeking to unite the Anglican Communion under common expressions of faith and social engagement, rather than focusing on debates over human sexuality that have divided bishops at past conferences.

“The aim of this conference – which, like all the [Lambeth] conferences, is a very significant moment in the life of the community – is to encourage Anglicans around the world to be looking outwards to the world,” he said in a press conference with conference organizers on June 22. “The church should express its mission and its life of discipleship through engagement with the great challenges that the next 30 or 40 years will impose upon the vast majority of Anglicans, especially those in areas of climate fragility, and political and other fragility.”

The Lambeth Conference, a gathering of bishops from across the Anglican Communion that has taken place about every 10 years since 1867, is being held July 26 to Aug. 8 at the University of Kent in Canterbury, England; Canterbury Cathedral; and Lambeth Palace in London. The conference is one of the four Anglican instruments of communion, in addition to the Primates Meeting and the Anglican Consultative Council, the communion’s main policymaking body, and the office of the archbishop of Canterbury.

The conference was originally scheduled for the summer of 2020, but postponed due to the COVID-19 pandemic. The conference last met 14 years ago in 2008.

In plenary sessions, keynote addresses, seminars and social events, the bishops will discuss themes including Christian unity and interfaith dialogue, evangelism, migration, the persecution of Christians and the challenges presented by the climate crisis and a rapidly evolving tech-based global economy. The overarching theme of this conference is “God’s Church for God’s World,” and 1 Peter will be the focus of a Bible study series throughout the conference – a text with themes of suffering, authority and power, said Janet Miles, head of communications for the Lambeth Conference Company.

Organizers said that as of June 22, 658 bishops and 480 bishops’ spouses were registered to attend in person, and more are in the process of registering to participate virtually due to concerns over COVID-19 and/or travel visa issues. All currently serving bishops in good standing in any province of the communion, of which there are “just shy of 1,000,” are invited, said Bishop Tim Thornton, the archbishop of Canterbury’s adviser on the Lambeth Conference.

Bishops’ spouses are also invited, but those in same-sex marriages – of which there are several in The Episcopal Church and other provinces – are not. Four gay Episcopal bishops met with Welby in January to discuss the situation, but no changes have been announced. In the press conference, Welby said that the decision was made because the 1998 Lambeth Conference issued a resolution stating that it does not recognize same-sex marriage.

“It was a very difficult decision as to whether to invite spouses in same-sex marriages or not. We’ve talked a great length with all of the spouses. … There are many people in the communion, not just bishops, who feel that [the 1998 resolution] was a wrong decision, and many more than there were at the time when the decision was taken. I have no doubt that that is the position of the communion. And in this very strange role which I hold, which includes describing me as a focus of unity, I can’t simply pretend that that’s not the case.”

Resolution 1.10 “upholds faithfulness in marriage between a man and a woman in lifelong union, and believes that abstinence is right for those who are not called to marriage.” The Lambeth Conference, however, is not a legislative body.

“It does not have any legal authority, but it does have heavy and serious moral authority,” said Archbishop Josiah Idowu Fearon, secretary-general of the Anglican Communion, in his remarks opening the press conference.

In May, the primates of the Anglican provinces of Nigeria, Rwanda and Uganda, announced in an open letter that they would boycott the Lambeth Conference – as they did in 2008 – primarily over the ordination of gay bishops and acceptance of same-sex marriage in The Episcopal Church and several other provinces. In response, Welby said the primates’ invitation to Lambeth remains open. About 300 bishops are from Nigeria, Rwanda and Uganda, Thornton said.

“These international conferences are not cheap, but we’re not in it to make a profit. We’re in it to cover our costs,” said Phil George, chief executive of the Lambeth Conference Company.

Thornton could not provide a total cost for the conference, with registration numbers still in flux, but said his office is “currently projecting a tiny surplus.” With that cost presenting a major burden in many provinces, more than half of the currently registered bishops are attending for free on a full bursary, he said.

For this conference, Welby has planned for the bishops to issue “Lambeth Calls” rather than resolutions, as they have at previous conferences. The calls – previously described as “short written statements that include declarations, affirmations and common ‘calls’ to the church and the world that the bishops want to make – are intended to move the conference away from issuing statements of doctrinal agreement and toward dialogue among autonomous provinces.

“The move from resolutions to calls is simply a recognition of the reality that the Lambeth Conference is not a synod. It can’t resolve things in the sense that they’re then resolved. They can call on provinces to consider for themselves, and that’s why we call them a call, because they’re a call; they are not a resolution.”

While the bishops disagree on many things, Welby said, they can all agree on one thing: that Jesus is Lord.

“My prayer is that this process will continue the slow process of learning, first of all, to disagree well,” he said, “and second, to recognize that although these questions of human sexuality are really questions of enormous significance and importance … the heart of being a Christian, is that we love Jesus Christ as God.”