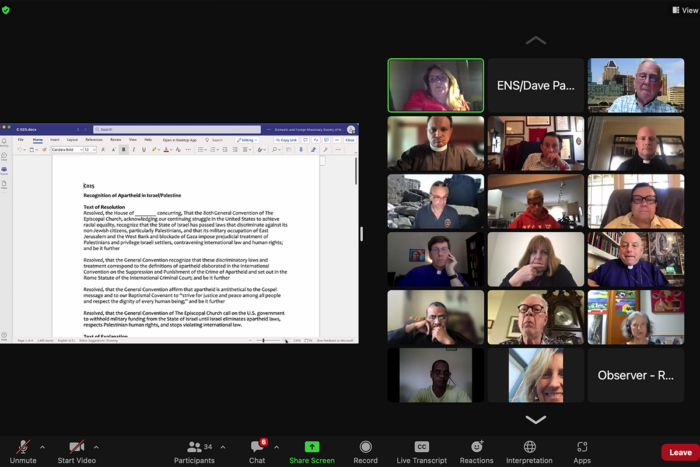 The bishops’ and deputies’ committees on Social Justice & International Policy briefly discuss one of three resolutions equating Israel to an “apartheid” state before voting to defer the resolutions until 2024 in a June 20 meeting on Zoom.

[Episcopal News Service] The 80th General Convention is poised to adopt a statement condemning Russia’s unprovoked war against Ukraine, amplifying earlier messages issued by Executive Council and the House of Bishops, while more controversial measures labeling Israel an “apartheid” state will be deferred until 2024.

Resolution B008, titled “A Call for the Cessation of Conflict in Ukraine,” was endorsed June 20 by a vote of the bishops’ and deputies’ committees on Social Justice & International Policy. The resolution invokes Jesus’ commandment to love your neighbor – “a commandment we believe provides no justification for violent conflict unless in the defense of the vulnerable and defenseless” – and it calls on nations with influence in the region to work to end Russia’s war on Ukraine.

B008 is the sole resolution from the Social Justice & International Policy committees that is scheduled for full floor debates when the House of Bishops and House of Deputies meet July 8-11 in Baltimore, Maryland. All other resolutions endorsed by the committees were placed on consent calendars, which typically makes their approval a procedural formality. Resolutions on a consent calendar are adopted together with a single vote.

The Ukraine resolution was withheld from the consent calendar not because it is controversial, but rather because House of Deputies leaders wanted to draw greater attention to the issue. “I think it would be good for us as a deputation,” Laura Russell, chair of the deputies’ committee, said in explaining why the Ukraine resolution should be sent to a floor debate. “We are appalled at what the Russian Federation is doing in Ukraine.”

Russell, a lay deputy from the Diocese of Newark, also alluded to the expedited legislative process that is part of the presiding officers’ plan to reduce the 80th General Convention from eight to four days in response to COVID-19 concerns. There will be less time available for floor debates on controversial resolutions, but Russell said she doesn’t expect much debate on B008, “because I do not see many people in our house, any people in our house, opposed to this resolution.”

Bishops’ and deputies’ committees have distinct rosters and vote separately, but they often meet together for hearings and deliberations on resolutions. At previous meetings of General Convention, the Social Justice & International Policy committees have considered some of the most contentious issues facing the church, particularly its evolving stance on the Israeli-Palestinian conflict, but the streamlined legislative process this year has taken some of the heat out of that recurring debate.

Nine resolutions related to Israel were assigned to the International Policy committees this year:

The committees were able to defer the apartheid resolutions to the 81st General Convention because church leaders are prioritizing measures at the 80th General Convention deemed most urgent or most critical for church governance. All committees have been asked to conclude their work by the end of this week, so that the House of Bishops and House of Deputies can devote their four days in Baltimore to legislative sessions.

The 80th General Convention initially was to take place in 2021 but was postponed a year in the hopes that pandemic conditions would improve enough by July 2022 for an in-person meeting. Conditions have improved, but church leaders finalized a plan earlier this month to scale down the in-person meeting due to the continued threat of COVID-19 outbreaks. In addition to a shorter meeting, the church is limiting the number of attendees and expanding public health precautions, such as requiring daily negative coronavirus tests.

Legislative committees have been holding online hearings on resolutions since February. The Social Justice & International Policy committees heard testimony May 31 and April 8 on the measures related to Israel. Additional testimony was taken June 2 during an omnibus hearing, followed by votes on several resolutions.

The June 20 meeting included hearings on four additional resolutions, including the one calling for peace in Ukraine. Another, Resolution D049, would put the church on record supporting laws protecting people involved in surrogate pregnancies. The other two resolutions would support LGBTQ+ refugees and asylum seekers (D045) and LGBTQ+ people around the world facing discrimination under the guise of COVID-19 restrictions (D060).

The committees voted in favor of those resolutions, but they chose to reject a separate resolution related to the war in Ukraine. Resolution D032 would have singled out for condemnation Patriarch Kirill, head of the Russian Orthodox Church, for his vocal support of the Russian invasion. Committee members said they were heeding warnings from church staff members that the resolution as worded could negatively affect some of the church’s ecumenical work.