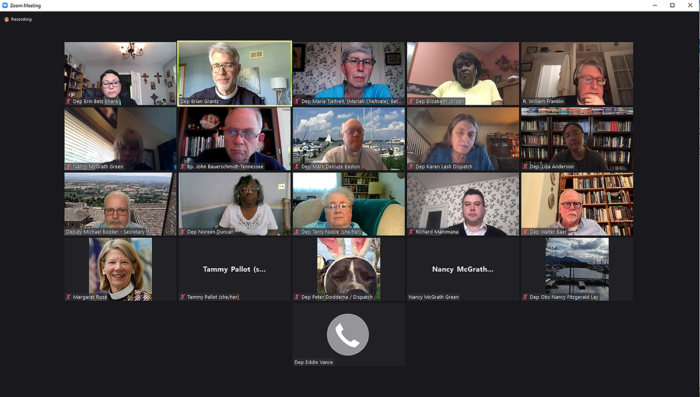 [Episcopal News Service] Action taken on June 18 during an online meeting of the General Convention legislative committees on Ecumenical & Interreligious Relations puts The Episcopal Church one step closer to full-communion agreements with the Evangelical Lutheran Church in Canada and the Church of Sweden.

“Full communion” means clergy of one church are eligible to serve congregations of the other. In addition, bishops of both churches are to be invited to participate in each other’s services of ordination.

During an earlier hearing on this resolution in February, the Rev. Margaret Rose, The Episcopal Church’s deputy for ecumenical and interreligious relations, said that this joint agreement has been developing for more than a decade and that the other three bodies already have agreed to it.

Resolution A137 codifies full communion with the (Lutheran) Church of Sweden in Canon I.20.1 and also clarifies policies to facilitate ministry exchange between the two churches. In 2018 the 79th General Convention acknowledged and affirmed the existence of a full-communion relationship with the Church of Sweden and called on the 80th General Convention to present a memorandum of understanding setting forth the terms and procedures of that full-communion relationship. That memorandum was finalized by both churches on Jan. 15, 2022

The deputies’ and bishops’ committees recommended the adoption of both resolutions. Because they amend the canons, they will be reviewed by the legislative committees on Constitution & Canons before they are sent to the House of Bishops, the usual house of origin for resolutions dealing with ecumenical matters.

If adopted by General Convention, these proposals would bring to seven the number of full-communion partners with The Episcopal Church: the Evangelical Lutheran Church in America; the Moravian Church (Northern and Southern Provinces; the Mar Thoma Syrian Church of Malabar, India; the Old Catholic Church of the Union of Utrecht; the Philippine Independent Church; the Church of Sweden; and the Evangelical Lutheran Church in Canada.

The committees then voted to recommend the amended resolution be adopted, with deputies voting to place it on the House of Deputies’ consent calendar.

The committees also recommended adoption, including placement on the House of Deputies consent calendar, of Resolution A055, which outlines an agreement between the Presbyterian Church (U.S.A.) and The Episcopal Church to allow clergy in each church to be licensed to serve in the other denomination’s congregations.

At a February hearing on this resolution, the Rev. Elise Johnstone of Olympia, a member of the Presbyterian Episcopal Dialogue Committee, said this agreement is not about full communion with the Presbyterians but allows sharing of clergy, which can be helpful in finding ordained people to serve Episcopal congregations in parts of the United States where there are many Presbyterians but fewer full-communion partners like the Evangelical Lutheran Church in America.

A resolution to continue ongoing ecumenical discussions, including those with the Presbyterians, Methodists and Roman Catholics, also was recommended for adoption via the consent calendar.

The committees consider another resolution about full communion, B001, this one with the Evangelical Lutheran Church in Bavaria (the Evangelisch-Lutherische Kirche in Bayern). Bishop William Franklin, assisting bishop in Long Island, said that while he fully supports this resolution, because of questions about the agreement that arose during a discussion at a recent House of Bishops meeting “this needs to be thoroughly discussed by the church before a vote is taken,” something he believes won’t be possible with this year’s shortened convention.

The committees then voted to recommend this resolution be deferred to the 81st General Convention in 2024. Deferring resolutions to a future convention is a new option for committees, made possible this year by a proposed rules change to expedite legislative action during the reduced number of legislative days.

The committee voted to recommend no further action on a different resolution about The Episcopal Church’s relationship to the Evangelical Lutheran Church in Bavaria, A091, which it said was superseded by the deferred B001.