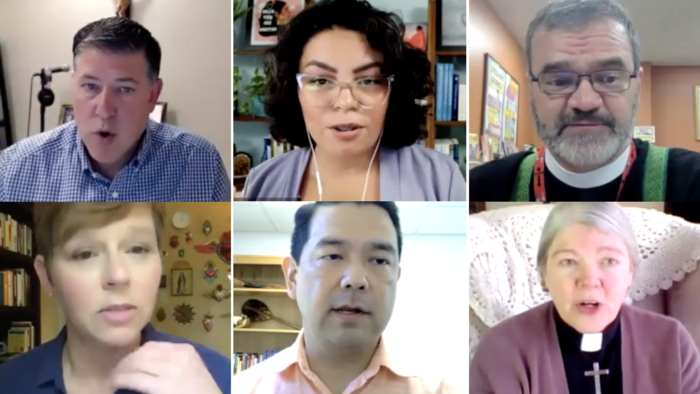 Editor’s note: An additional candidate, the Rev. Edwin Johnson, rector of St. Mary’s Episcopal Church in Dorchester, Massachusetts, declared his candidacy for House of Deputies president on June 3. A video of the June 13 candidate forum is here.

[Episcopal News Service] Four candidates for president and one candidate for vice president of the House of Deputies participated June 4 in an online forum, to discuss their interest in churchwide leadership and their visions for The Episcopal Church’s future.

The forum was moderated by the Rev. Albert Cutié, rector of St. Benedict’s Episcopal Church in Plantation, Florida. It can be viewed on YouTube. A second Zoom forum intended for deputies and alternates will be held at 2 p.m. Eastern June 13.

The optional candidate forums hosted by the House of Deputies were open to candidates who signed up for the forums by May 31. It still is possible for additional candidates to come forward, as long as they submitted applications to the General Convention Office by March 8 and agreed to a background check.

The deputies’ current president, the Rev. Gay Clark Jennings, is finishing up her third and final term and, according to term limits established by The Episcopal Church’s Canons, will step down at the end of General Convention. Byron Rushing of the Diocese of Massachusetts, the current vice president, is completing his third term as well and cannot run again, so deputies will also elect his successor.

Cutié opened the first forum by asking the candidates about the discernment that went into their decisions to become candidates for president and vice president.

Anderson responded that she declared her candidacy after prayer and discussions with others across the church. She said she also looked at her own churchwide experience and felt “a real abiding, enduring sense that my gifts were being fully deployed when I am in the midst of church governance and the different expressions of that.”

Anderson, the daughter of former House of Deputies President Bonnie Anderson, is rector of Trinity Episcopal Church in Excelsior, Minnesota, and has served in the past on Minnesota’s Diocesan Council and Standing Committee, including as president. She currently serves on The Episcopal Church Executive Council.

Ayala Harris, who has two decades of experience in the nonprofit sector, said fellow Episcopalians had asked her to consider a greater role in churchwide leadership in recent years. As she prepared to conclude her six years on Executive Council, “I was wondering what might be next for me in ministry,” she said, and through prayer she felt a call to run for House of Deputies president.

“When Jesus asks you to come forward and invites into God’s mission, the faithful answer to God is to say, ‘yes,’” she said, adding that as a Latina and a lay woman, she could bring a new perspective to the role. Her full candidate profile is available here.

Kusumoto is another lay deputy running for president. He has served on the Hawai’i Diocesan Council, is a co-chair of the House of Deputies’ Asian Caucus and has been as a trustee to the Church Pension Fund for the past 10 years.

“I am just super grateful for this church,” Kusumoto said when asked what motivated him to become a candidate. “Every part along the way of my career, of my life experiences has been touched and guided by this church. … I think about those individuals out there, all of us, where this church is there for them when they need, and I think about how I can be a part of that.”

Kusumoto has served as a deputy since 2006. His full candidate profile is available here.

Discernment doesn’t happen alone, Simpson said during the forum. It happens through prayer and conversation, by listening to friends and family “but also listening to God’s voice,” Simpson said in describing how he discerned the call to run for House of Deputies president.

Simpson has served as dean of Calvary Cathedral in Sioux Falls, South Dakota, since 2009. In addition to multiple terms on the Standing Committee and Diocesan Executive Council, he has filled numerous committee leadership positions in the House of Deputies since his first year as a deputy in 1997. His full candidate profile is available here.

Taber-Hamilton was the sole candidate vice president who signed up to participate in the June 4 forum. She is Shackan First Nation, has served on Olympia’s Diocesan Council and Standing Committee, including as president.

Taber-Hamilton said she has long felt called “to gather people into community and to really appreciate mutually the diversity of the church, and I see the opportunity for that in the vice president’s role.”

She has participated in past Episcopal delegations to the United Nations Permanent Forum on Indigenous Issues and the Conference of the Parties meetings on climate change, or COP. Her full candidate profile is available here.

The House of Deputies vice president is an unpaid volunteer position. Since 2018, the president has been considered a contractual employee and paid a fee, set annually by Executive Council. The president’s compensation was set at $233,166 for 2022, with no other employee benefits.