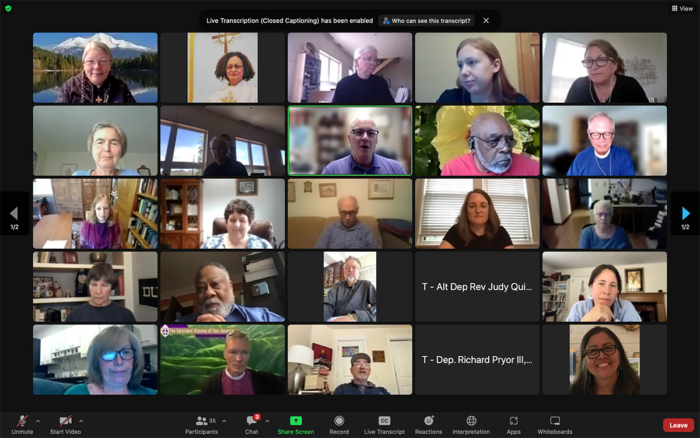 The committees on Environmental Stewardship and Care of Creation heard testimony on June 11 on a number of resolutions aimed at halting and/or mitigating climate change.

[Episcopal News Service] General Convention committees on Environmental Stewardship and Care of Creation, after receiving testimony, on June 11 adopted and moved to the House of Bishops’ consent calendar resolutions that would encourage support of the United Nations Decade of Action to deliver on the Sustainable Development Goals; the Green New Deal legislation, currently stalled in the U.S. Congress; more virtual rather than in-person meetings to reduce the church’s overall carbon footprint; and, finally, support for investment strategies with carbon-intensive banks and financial institutions to help slow global warming.

“The earth is dying. I am 24, and I have no idea what the next 40 years of my life are going to look like on this planet,” said Diocese of Ohio deputy Richard Pryor III, who proposed and urged support of Resolution D064.

D064 would direct the Office of Government Relations and all Episcopalians to call upon elected officials to advocate for climate change policies, “not least the Green New Deal,” introduced in the U.S. House of Representatives April 20, 2021, by New York Democrat Alexandria Ocasio-Cortez, and which has been referred to the House Subcommittee on the Constitution, Civil Rights, and Civil Liberties. The Green New Deal proposes the federal government wean the nation from fossil fuels and curb planet-warming greenhouse gas emissions across all sectors of the economy. It also aims to guarantee new high-paying jobs in clean energy industries.

“As one of many young people who are concerned about our planet and its future that we’re going to have to live in, and potentially give to our children, should we choose to have children, I urge you to pass this resolution,” Pryor said.

First postponed a year because of the COVID-19 pandemic, a truncated 80th General Convention is now scheduled to take place in Baltimore, Maryland, July 8-11. The triennial convention is the church’s governing body, where final resolutions are considered and voted on by both the House of Bishops and the House of Deputies. Also as a result of the pandemic for the first time, two-dozen bishop’s and deputies’ committees have held online hearings together in advance of convention. The legislative process has since been further revised. By the June 6 deadline, 346 resolutions had been filed.

Alaska Bishop Mark Lattime, who chairs the bishops’ committee, explained that the legislation will move next to the House of Bishops’ consent calendar, where it will be considered and voted on along with other resolutions as a single business item, a process to expedite the resolutions through the houses given the shortened convention. It will then be considered similarly in the House of Deputies.

Three resolutions were amended, including Resolution A087, proposed by the Task Force on Care of Creation and Environmental Racism. Kansas Bishop Cathleen Bascom added a clause to call upon dioceses to begin to build collaborative networks of landowners and creation trustees to devote portions of their land to reforestation; wetland and coastline preservation; and, adopt and share regenerative agricultural and ranching practices work.

The resolution also calls upon The Episcopal Church and its entities, including dioceses, institutions, schools and churches, to commit to a goal of net carbon neutrality by 2030, “through a combination of reducing emissions from travel, reducing energy use, increasing energy efficiency in buildings, and purchasing offsets from duly investigated, responsible, and ethical partners.”

Bishop Marc Andrus of the Diocese of California, amended Resolution A088 which, among other things, affirms the federal government’s decision to rejoin the Paris Climate Agreement. Andrus amended the resolution to increase allocations from $20,000 to $30,000 per triennium to support costs associated with attendance of The Episcopal Church delegation at United Nations Climate Change conferences. The next Conference of the Parties is scheduled for Nov. 7-18, 2022, in Sharm el-Sheikh, Egypt.

The previous administration had withdrawn from the 2015 Paris climate accord, an international treaty aimed at limiting global warming to below1.5-degrees Celsius, compared to pre-industrial levels.

A088, proposed by the Task Force on Care of Creation and Environmental Racism, also calls for The Episcopal Church’s delegation to the COP to be made up of representatives from frontline communities, including the impoverished communities and communities of color.

Emily Hopkins, an alternate deputy from the Diocese of California and a co-sponsor of Resolution C015, told the committees’ members that the church, should “just get back to the garden” or nature-based solutions to keep carbon emissions sequestered in the ground.

C015, proposed by the Diocese of California, directs Executive Council’s Economic Justice Loan Committee, in consultation with the Task Force on Care of Creation and Environmental Racism, to implement a positive investment strategy to fund methods to capture and store greenhouse gases through sustainable nature-based land management solutions such as planting forests and adopting regenerative agricultural practices.

Hopkins referred the committees to a CNBC video about regenerative farming and carbon capture offset.

Brian Sellers-Petersen, missioner for agrarian ministry in the Diocese of Olympia and co-founder of the Episcopal Food, Farming and Faith Network, who had worked with Episcopal Relief & Development in a variety of capacities, including as developer of its Abundant Life Garden Development curriculum, also testified in support of C015.

“I’ve been able to visit hundreds of Episcopal Church properties throughout the country …We own a lot of land, or we are stewards of a lot of land,” he said. “I just really want to commend some of the great things that are going on, in terms of small-scale regenerative farming, gardening and landscaping unchurched land. But, on the flip side, there’s a lot more that needs to be done.”

The resolution was amended to pledge support for an Anglican Communion initiative scheduled to be launched at the upcoming Lambeth Conference in Canterbury, England. The initiative calls on Anglicans throughout the world to plant trees, practice reforestation and regenerative agriculture, protect forests and other plant communities, according to Andrus, who helped author the initiative.

Bishops at Lambeth will be asked to commit to going to go back to the dioceses they serve and, around practices like confirmation, “they’ll ask confirmands to take part by planting trees or sending money to support planting trees or reforestation,” Andrus said. “[Or] you could set a diocesan goal to support the work of Bishop Marinez [Bassotto] in the Amazon [in the Episcopal Diocese of Brazil], or for prairie restoration in Kansas, or to help the work of mangrove protection in the Pacific Islands.”

With bishops adopting and deputies concurring, the committees also approved Resolution A020, proposed by the Standing Commission on World Mission, which would encourage all parishes, dioceses and jurisdictions to support the United Nations Decade of Action (2020-2030) to achieve the Sustainable Development Goals, a blueprint for fighting poverty and hunger, confronting the climate crisis, achieving gender equality and the redistribution of financial resources.

Through a translator, Dominican Republic lay deputy Grecia Christian Reynoso testified in support of A020: “We’re members of a church and we have some sustainable goals for each one of our activities. In all of our existing ministries, we’re promoting the work we’ve been called to do, the work that Jesus gave each of us.” She added that she hoped the 80th General Convention would approve the legislation. “Let’s continue working hand in hand with Jesus.”

Also moved to the consent calendar were: Resolutions C016, which would establish and implement a shareholder strategy to address carbon-intensive lending by banks and financial institutions within The Episcopal Church’s and the Church Pension Fund’s portfolios, designed “to slow global warming.”

Diocese of Washington deputy Nathan Brown testified in favor of Resolution D027, which he proposed, seeking more virtual meetings to “save our carbon emissions and also help the church budget free up more money that we can use on ministry and other important aspects for the church.

“Right now, frankly, we do generate a lot of carbon emissions with our travel, and we do spend a lot of money,” he told committee members. “Perhaps one of the calls of the pandemic that we can learn from as a church is to use virtual governance more frequently.”

He added: “I also think we should explore ways to foster a greater sense of community in our online engagement with one another. I hear a perfectly valid argument, … that we don’t get a chance to know each other. I think we have opportunities to foster that together with some creativity.”

— The Rev. Pat McCaughan is a correspondent for ENS based in Los Angeles.