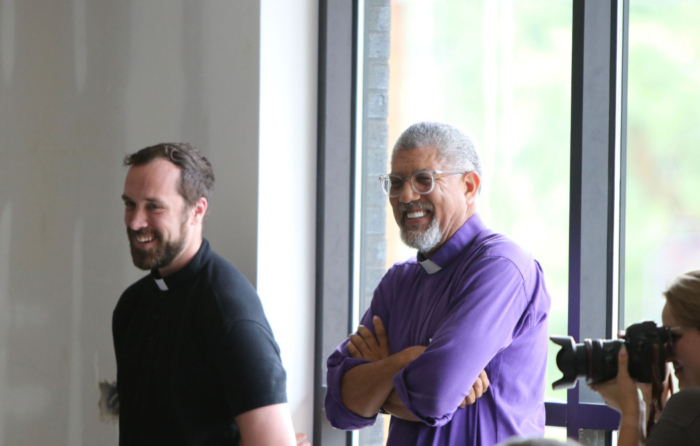 Atlanta Bishop Robert C. Wright and University of Georgia chaplain, the Rev. Clayton Harrington, during a June 11 open house for The Wright House. Photo: Courtesy of the Diocese of Atlanta

[Diocese of Atlanta] The chapel at The Wright House was packed. There was singing, there was preaching, there was even a collection taken – despite there being no altar, no vestments and no paint on the walls.

The June 11 open house – styled a sneak peek at the soon-to-be-finished Episcopal ministry at the University of Georgia – did provide the over 100 attendees hard-hat tours, delectables and even swag.

The Wright House is named for Bishop Robert C. Wright, for his steadfast support for children, youth and college ministries.

The $20 million project, completed on time and within budget, was a seven-year project for Rev. Canon Lang Lowery, who shepherded it from concept to completion.

“We did have a few snags along the way,” Lowery said, “but we were guided by the Athens Clarke County planning department as we went to many zoning meetings and ultimately met every challenge.”

Wright House Foundation board chair, Rev. Nikki Mathis said donations and income from apartment rentals will provide rent subsidies for students who otherwise may be homeless.

“At UGA 15% of students are “couch-surfing,” a polite way of saying homeless,” Mathis said. “So, I will be passing the hat, she said, holding up a construction hat.

The 123-bedroom facility on the University of Georgia campus, which opens to students in August, features amenities beyond any dorm. Each bedroom has a private bathroom. There is a shared kitchen and washer and dryer in each fully furnished suite. And the facility has private onsite parking, secure bike storage, a fitness facility, multiple study spaces, and a common kitchen and coffee bar.

The Wright House also has extensive outdoor common areas adjacent to the buildings and a green roof deck.

Wright told those gathered in the chapel that the open house “is just the beginning” of a long-term commitment to ministry for students at the state’s flagship university.

“Yes we’re going to ask you for some money today,” Wright said to laughter.

“But what I really want you to do today is, when you leave put some prayers in these walls – this drywall – because for many years to come – long after me, this will be a house of prayer for all students.”

The Rev. Clayton Harrington, UGA Episcopal chaplain, said The Wright House is designed to be a “live, study, pray” environment for students; a space to foster intentional living. Harrington, who will live on-site, said students of any faith or no faith – whether they live in The Wright House or not – are welcome to participate in programs offered by The Episcopal Center at UGA.

The Wright House is one of 11 campus ministries of The Episcopal Diocese of Atlanta. Learn more about youth and young adult ministries of the diocese.