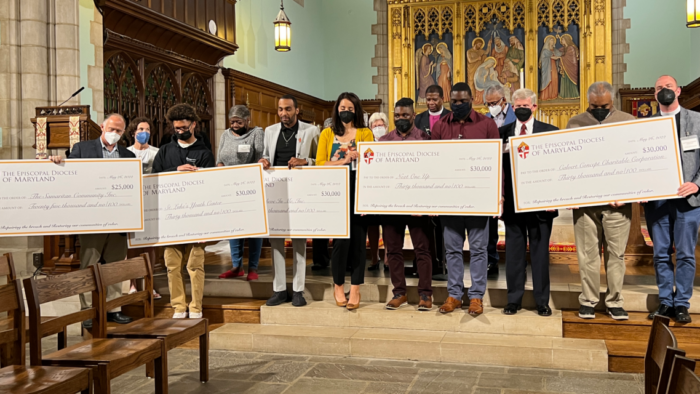 Maryland Bishop Eugene Sutton poses with representatives from organizations awarded grants from the diocese’s reparations fund in a ceremony at the Cathedral of the Incarnation on May 25. Photo: Diocese of Maryland

[Episcopal News Service] A grants award ceremony held May 25 at the Cathedral of the Incarnation in Baltimore marked a first for the Diocese of Maryland – the first time the diocese was putting its financial resources behind a program of racial reparations – and it may offer a glimpse of more to come from parallel efforts across The Episcopal Church.

This initial round of grants totaled $175,000 to six community organizations that are working to improve the lives of African Americans and strengthen Black communities. They are the product of the diocese’s six-year effort to confront the church’s past complicity in slavery and other racist systems while seeking financial remedies for those systems’ continuing legacy of inequality.

“We researched our history. We know of our church’s involvement, first of all, in slavery,” Bishop Eugene Sutton said in his introduction at the award ceremony, video of which is available on YouTube. Sutton noted that all of colonial Maryland’s clergy members owned slaves into the 18th century, as did the diocese’s first bishops.

“And we knew that many of our churches were enriched because of that evil institution,” Sutton continued. “We also researched into how we as an institution, like all of the other institutions in society, benefitted materially and financially from the centuries of racial injustice even after slavery. And that did not sit well with us.”

The Diocese of Maryland created its reparations fund in 2020 with $1 million in seed money, and since then, the fund has grown with individual donations from across the diocese, Sutton said. His diocese is not alone: Several dioceses and church institutions are in various phases of studying, developing and implementing similar programs of reparations, and the secular movement for government-funded reparations also has gained some traction in appealing to state and federal lawmakers.

Episcopalians’ local efforts are part of The Episcopal Church’s broader work toward racial healing, within the church and in society. Much of that work today follows the Becoming Beloved Community framework that church leaders launched in 2017. Building on those efforts, the 80th General Convention is expected to consider a range of proposals targeting racial injustice when it meets July 8-11 in Baltimore, including Resolution A125, which would commit an estimated $2 million a year to the creation and operation of a new churchwide Coalition for Racial Equity and Justice.

Although Resolution A125 does not use the language of reparations, another proposed resolution, D044, would create a Reparations Fund Commission to study how The Episcopal Church can use its assets to back “a sustained, meaningful, tangible response to the historic and ongoing legacy of slavery and displacement of Indigenous peoples of what is now the United States.”

A committee hearing on those resolutions is scheduled for 7:30 p.m. June 23 on Zoom.

The Episcopal Church has struggled to address its complicity with racial injustice and white supremacy for more than three decades, Only in recent years have dioceses considered financial reparations for those victimized by the racial oppression once condoned by the church. And while cash reparations for the descendants of enslaved individuals have yet to gain widespread support among Americans, most Episcopal initiatives so far have focused more generally on investing in communities and promoting systemic and institutional changes.

Sutton and the Diocese of Maryland have been at the forefront of those conversations. The dioceses was one of the first in the church to take substantial steps toward financial reparations when its diocesan convention in 2016 asked the Diocesan Council to begin studying a reparations proposal.

Diocesan leaders followed up with a June 2019 convention vote endorsing financial reparations in concept, and a September 2020 vote approved the money to start a diocesan reparations fund.

The diocese formed a Reparations Committee to facilitate awarding of grants from the fund, with an emphasis on “programs that are building up Black communities and helping to repair the breach caused by systemic racism.”

“We learned a long time ago in Sunday school ,when you take something from someone, theft of their lives or theft of their properties, you make restitution,” Sutton said at the first award ceremony last month. “That is a step toward the full reconciliation of all peoples that we believe that God is calling us all to.”

The following are highlights from notable examples of reparation efforts across The Episcopal Church.

The first round of grants awarded last month by the Reparations Committee included $25,000 for the Samaritan Community, a Baltimore nonprofit that provides social services to families and individuals in crisis, with African Americans making up about 85% of its clients.

Each of the other five grants totaled $30,000. An organization called Next One Up will use the money to improve the academic and economic outcomes of Black teens and young adults. Anne Arundel Connecting Together received a grant for a new program offering career support for formerly incarcerated individuals. A grant to an organization called I Believe in Me Inc. will help fund a mentoring program for at-risk youth. Another grant was awarded to Calvert Concept Charitable Corporation, which helps facilitate home and business ownership.

The sixth grant was awarded to St. Luke’s Youth Center, to help develop an underused Episcopal church property in West Baltimore into a resource center for art, education and community renewal.

The diocese created its Reparations Committee in 2006 in response to a series of resolutions passed that year by the 75th General Convention. One General Convention resolution had asked dioceses to study their historic complicity in the slave trade. Another called on Congress to study “proposals for monetary and non-monetary reparations to the descendants of the victims of slavery.”

The work of the New York Reparations Committee expanded in 2018 with the launch of a three-year initiative, beginning with a Year of Lamentation featuring events that grappled with examples of racial injustice in the diocese’s history. And in November 2019, the diocesan convention committed $1.1 million from its endowment to support future recommendations of the Reparations Committee.

The seminary in Alexandria, Virginia, founded in 1823, was considered a trailblazer among American academic institutions when it first announced in September 2019 that it planned to create a $1.7 million reparations fund to repay the debt from its exploitation of Black laborers earlier in its history, during slavery and segregation.

It also launched an effort to identify their oldest living direct descendants. In February 2021, it began issuing cash payments to eligible relatives, whom it calls “shareholders,” making it one of the first American institutions to offer reparations in the form of direct payments. The initial payments were about $2,100 each, and shareholders were offered access to on-campus amenities that were off-limits to their ancestors.

The Diocese of Texas also committed large sums to racial healing projects in a plan unveiled in February 2020, when the Diocesan Council approved $13 million for the newly created Missionary Vision for Racial Justice Initiative. Though the diocese didn’t describe the initiative as a reparations program, its stated purpose is to “support the people of our communities who were actually injured by our past actions,” Bishop Andrew Doyle said at the time.

The initiative centered on the creation of several funds, endowments and scholarships, including a fund to support historically Black churches and another fund to underwrite community initiatives. Money also was set aside to support Black students attending the Seminary of the Southwest in Austin and to expand racial justice studies at the seminary.

So far, five Black seminarians have been supported in their studies by the initiative, and Seminary of the Southwest is using another portion of the funding this year to create the new position of director of Beloved Community initiatives.

After the May 2020 killing of George Floyd by a Minneapolis police officer inspired widespread national and international protests against racial injustice, the Diocese of Minnesota sought ways of stepping up its racial reconciliation work, including through the Minnesota Council of Churches’ 10-year Truth & Reparations initiative.

Launched in October 2020, the initiative’s stated goal is “dismantling the structures and repairing the damage of racism in Minnesota,” dating back centuries to the dehumanization of Indigenous peoples and African slaves by European colonists.

The Episcopal diocese also received $150,000 from The Episcopal Church to support its “continuing work of dismantling the systemic racism we have created in this country and still permeates our church and society.” The diocese directed the money to its local Episcopal Service Corps chapter, a new diocesan worshipping community, a partnership with a new Twin Cities community organization and a new curriculum for anti-racism training specific to the state.

In a 2020 vote, New Jersey’s diocesan convention established its own reparations task force “to study how we as a diocese may address the original sins of racism and slavery.” The task force spent 2021 researching the diocese’s history, soliciting input from historians and examining how other dioceses have approached the topic of reparations, including the Diocese of New York.

That work led to the approval in March 2022 of a long-term Reparations Commission that will hire a part-time historian and researcher to support the diocese’s future efforts. “We have to understand our history as a diocese and also that history in the context of the state of New Jersey,” Annette Buchanan, former president of the Union of Black Episcopalians and the commission’s co-chair, told Episcopal News Service.

Episcopalians in New Jersey also have joined groups rallying for legislation that would establish a state reparations task force. One such rally, in October 2021, was hosted by St. Peter’s Episcopal Church in Perth Amboy and drew nearly 200 supporters.

The diocesan convention passed a resolution in November 2021 to use $10 million to establish an endowment for a reparations fund and set aside an additional $500,000 for a racial justice and healing fund amid pressure from Episcopalians in the diocese. The diocese vowed to spend the money on programs and initiatives that directly benefit Black and Indigenous communities, other communities of color and affiliated organizations and institutions.

The diocese, its colonial roots dating to 1607, “has benefited from chattel slavery, the effects of which extend far beyond the Emancipation Proclamation of 1863,” the diocese said when it announced the endowment fund. “These actions of convention continue a commitment to learning about and atoning for the sin of racism. The people of the diocese will strive to repair the damage of failing to live by the Christian faith that we are all created in the image of God and that we are all beloved children of God.”

The diocese, based in the nation’s capital, is in the preliminary stages of developing a racial reparations program and has formed a Reparations Task Force to study the issue. Diocesan leaders have said the purpose is “to investigate the financial legacy of chattel slavery in the diocese. Our goal is to reckon with and make restitution for the value of reparations owed on that legacy.”

In October, the task force will hold a daylong symposium at Calvary Episcopal Church in Washington to share ways the diocese is reckoning with a history of anti-Black racism and how it has benefited from participation in racist systems. The diocese says this will “lay the groundwork for a resolution publicly acknowledging these harms to be presented and the 2023 Diocesan Convention.”