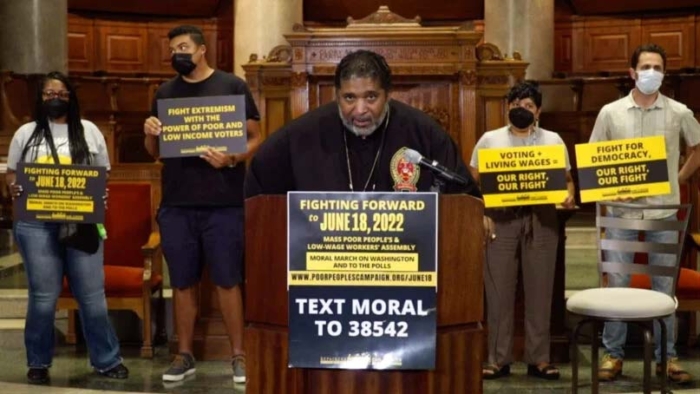 [Religion News Service] Faith-led advocacy group the Poor People’s Campaign is pushing for a broad-based meeting with President Joe Biden to discuss poverty, arguing the White House has not adequately responded to requests for a summit despite the president endorsing the group while running for office and speaking at their events.

Speaking at National City Christian Church in downtown Washington on June 6, the Rev. William Barber, a Disciples of Christ minister and the group’s co-chair, called on Biden to meet with the Poor People’s Campaign to discuss poverty and the plight of low-wage workers.

“Why don’t poor people get the same audience in the Oval Office that corporations get?” asked Barber, a prominent anti-poverty advocate who preached at Biden’s inaugural prayer service.

The Rev. Liz Theoharis, a Presbyterian minister and fellow campaign co-chair, echoed Barber in her own remarks. She pushed for a meeting with the president before declaring that “when we lift from the bottom, everybody can rise.”

The pair was followed by the Rev. Melanie Mullen, a priest and denominational official who delivered a message on behalf of Episcopal Church Presiding Bishop Michael Curry, and Rabbi Jonah Pesner, senior vice president of the Union for Reform Judaism.

“We join the call to President Biden and his administration with a demand: to meet with those whose voices need to be heard,” said Pesner, speaking via Zoom.

Representatives for the White House did not immediately respond to a request for comment.

Monday’s event marks the third time the Poor People’s Campaign, which advocates for liberal-leaning economic policies, has publicly requested a summit on poverty at the White House. The group released a public letter detailing their hopes for an event with the president that includes faith leaders, impoverished people, labor groups and economists.

“The (Poor People’s Campaign) delegation to the White House would be made up of Black, low-wage medical workers, white farmers, Latino meat plant workers, Indigenous fast-food workers from Mississippi to Massachusetts to North Carolina to New York to Kansas to Kentucky to Texas to California to Illinois to Georgia,” read a separate statement from the group.

Barber told Religion News Service earlier this year that while Poor People’s Campaign representatives have repeatedly asked for the meeting — and even publicized the request via an open letter in September — it has yet to materialize. The North Carolina pastor personally pressed the president about the proposal in March while attending a bill signing at the White House. Officials, Barber said, told him they were “going to work on” the meeting.

“I’m going to believe, because I’m a person of faith, what was said at the White House … a few weeks ago,” Barber said on Monday, adding he doesn’t want to make the request into a “personality battle” with the president.

But frustration with Biden on the issue was palpable during the event, with Barber admitting he was “bothered” by the lack of response.

The press conference highlighted the contrast between recent silence from the White House about the meeting and Biden’s recurring outreach to the group during his most recent campaign for president.

Biden’s 2020 campaign was notable for its comparatively aggressive outreach to a range of religious voters, particularly Catholics and Black Protestants. But Biden singled out Barber in particular for praise, referencing him during speeches and speaking at multiple Poor People’s Campaign events before and after he was elected president.

“I want to be part of your movement,” Biden declared during a September 2020 Poor People’s campaign event.

Barber, in turn, endorsed Biden in his personal capacity. While Barber and others affiliated with the Poor People’s Campaign have at times criticized Biden during his tenure as president, the group has also repeatedly staged major protests against lawmakers — including Democrats such as Sens. Joe Manchin and Kirsten Sinema — who stymied efforts to pass bills on voting rights and social programs key to Biden’s proposed legislative agenda.

Renewed calls for a White House confab coincide with the ramp-up to a major Poor People’s Campaign event slated for June 18 in Washington, when the group plans to assemble throngs of supporters for a “Mass Poor People’s and Low-Wage Workers’ Assembly and Moral March.”

Campaign organizers said they have expressed interest in hosting a poverty summit with members of Congress as well and have a hearing scheduled with lawmakers the same week as the march.

Barber said he is still hopeful the White House will respond to their requests before the march, but warned that if they don’t, “I will give my full response on June 18.”

Monday’s event also included short speeches from labor leaders — including the heads of the Service Employees International Union and the American Federation of State, County and Municipal Employees — as well as organizers representing low-wage workers across the country. Among them: a Dollar General staffer, a barista working to unionize a Starbucks and fast-food worker Beth Schaffer.

“We’re asking President Biden to meet with low-wage workers and listen to our solutions,” she said.