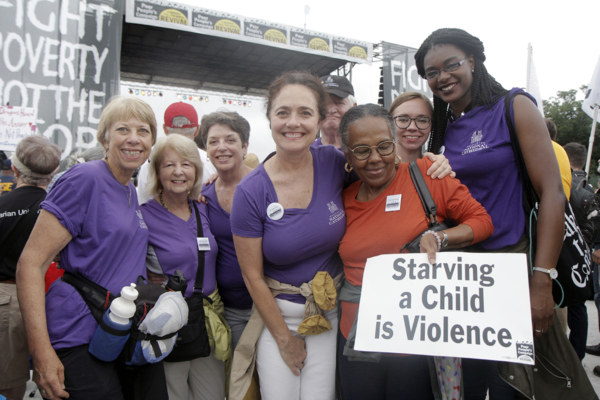 [Episcopal News Service] Episcopalians are invited to take part in the Moral March on Washington held by the Poor People’s Campaign, the ecumenical initiative advocating economic justice for poor and marginalized Americans supported by The Episcopal Church.

“The Executive Council of The Episcopal Church first endorsed this refreshed iteration of the Poor People’s Campaign in 2018. Since then, our church has become one of the strongest denominational voices in the campaign,” Presiding Bishop Michael Curry wrote in an invitation email. “I am grateful to everyone who has joined and labored so that all Americans might enjoy living wages, health care, homes in which they can thrive, voting rights, clean air and water, education, and an end to militarism and religious nationalism.”

The march on Capitol Hill will take place June 18, and Episcopalians are invited to gather the day before at the Church of the Epiphany (1317 G St. NW, Washington, D.C.) for food, fellowship, prayer and preparation. For details and registration, click here.

The Poor People’s Campaign was launched in 2018 as a revival of the Rev. Martin Luther King Jr.’s appeal for economic security, the cornerstone of the original Poor People’s Campaign. It is co-chaired by the Rev. William Barber and the Rev. Liz Theoharis, and has received support from Curry, who delivered video addresses at the 2018 march and the 2020 virtual march.

The campaign aims “to confront the interlocking evils of systemic racism, poverty, ecological devastation, militarism and the war economy, and the distorted moral narrative of religious nationalism.” It is currently advocating for 14 policy priorities that would address these issues, including universal health care, a $15/hour minimum wage, guaranteed housing and strengthened voting rights. Organizers have pointed to the worsening social inequalities that have developed over the pandemic as a cause for renewed urgency.

“We assemble and march on June 18, 2022 because any nation that ignores nearly half of its citizens is in a moral, economic and political crisis,” Poor People’s Campaign organizers wrote in their invitation to the march. “There were 140 million people who were poor or one emergency away from economic ruin before the pandemic. Since March 2020, while hundreds of thousands of people have died, millions are on the edge of hunger and eviction, and still without health care or living wages, billionaire wealth has grown by over $2 trillion.”

The Episcopal Church has been partnering with the Poor People’s Campaign since 2018, through the reconciliation, justice and creation care program led by the Rev. Melanie Mullen. The church was the second denomination to officially sign on as a co-sponsor of the Poor People’s Campaign, through an Executive Council resolution. Over 100 Episcopalians from across the United States participated in the campaign’s first march on Washington in 2018. In August 2021, several Episcopal clergy and lay leaders were among more than 200 demonstrators who were arrested in Washington, D.C., while rallying with the Poor People’s Campaign in favor of legislation that would benefit disenfranchised voters and low-income Americans.

“As Episcopalians, our baptism commits us to live as Jesus did, to strive for peace and justice and the dignity of all people, to care for the most vulnerable,” Curry wrote in his invitation. “When they struggle, we must struggle with them. When they rally, we must rally with them. … This movement is all about love in action. By God’s power and grace, let us love one another and our neighbors now, not merely in word but in deed and in truth.”