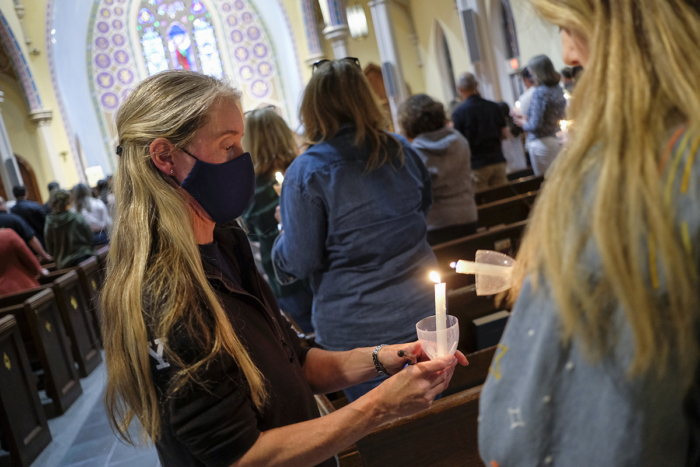 People take part in a vigil May 26 to stand in solidarity with the Uvalde, Texas, families and demand an end to gun violence at Trinity Episcopal Church in Newtown, Connecticut. Photo: Associated Press

[Episcopal News Service] Episcopal congregations and church leaders are honoring the victims of last week’s deadly school shooting in Uvalde, Texas, and calling for action against gun violence in prayer vigils and worship services across the United States, including a vigil held in the Connecticut community where the Sandy Hook Elementary School massacre occurred nearly 10 years ago.

“We will never get over what has happened. Children have been killed. Our hearts have been broken. The image of our hometown has been shattered,” the Rev. Michael Marsh, rector of St. Philip’s Episcopal Church in Uvalde, told those in the pews at the church’s May 29 Eucharist, which was livestreamed on Facebook. But, he continued, “my hope and my belief and even my experience are that we will get through this.”

The congregation has joined local efforts to collect donations to support survivors, families of victims and others in the community.

“This community responds together in times like this,” Beverly Heyen, a 15-year-old member of St. Philip’s, told Time. “Our hearts go out to everyone, and everyone is connected in some way. … And this church is a part of that.”

The December 2012 rampage at Sandy Hook in Newtown, Connecticut, left 20 students and six educators dead. It remains the nation’s deadliest school shooting, though the attack in Uvalde has drawn comparisons. The gunman in Uvalde opened fire at Robb Elementary School on May 24, killing 19 students and two teachers.

“We know too well what the Uvalde community is going through right now,” Po Murray, chairman of Newtown Action Alliance, said at a May 26 vigil at Trinity Episcopal Church in Newtown. “Newtown and Uvalde will be forever connected by shared tragedies that have ripped the hearts out of so many in the nation and in the world.”

On May 29, President Joe Biden was in Uvalde to visit and pray with survivors of the massacre. Biden, who is Catholic, attended Mass at Sacred Heart Catholic Church.

“We must move forward together … to support one another, with respect for our differences,” San Antonio Archbishop Gustavo García-Siller said during the Mass.

While leaving the service with first lady Jill Biden, the president heard someone call out, “Do something.” He responded, “we will,” according to the Texas Tribune.

The Episcopal Church has advocated at least since the 1970s for legislation seeking to reduce the risk of gun violence in the United States, though efforts to pass new gun restrictions and safety measures routinely face insurmountable barriers in Congress, where pro-gun groups like the National Rifle Association have been successful in blocking them.

“God of righteousness, you have granted our leaders, our president, the governor, members of Congress, the courts and legislatures power and responsibility to protect us and to uphold our right to life, liberty and the pursuit of happiness,” Presiding Bishop Curry said May 24 in prayers that were livestreamed on Facebook. “Strengthen their devotion and our devotion to our common life, to find clarity of purpose for all.”

In Southington, Connecticut, about 30 miles northeast of Newtown, St. Paul’s Episcopal Church held a “service of lament” on May 28 to mourn the 21 victims in Uvalde, including by tolling its bell 21 times.

“We felt really impacted because Sandy Hook has not left the veins of Connecticut,” the Rev. Helena Martin, the church’s priest-in-charge, told WFSB-TV. She wore an orange stole to signify her solidary with gun safety advocates.

“We don’t just pray and go home,” she said. “A lot of people at St. Paul’s are feeling fired up and want to do something.”

Other vigils sought to honor the victims in both Uvalde and Buffalo, New York, another city in mourning after a mass shooting. A gunman killed 10 people, all of them Black, at a Buffalo grocery store on May 14, an attack that authorities say was motivated by racist ideology.

In Austin, Texas, St. James Episcopal Church hosted a service on May 26 at which Austin Mayor Stephen Alder spoke. “The real danger here is not the evil, because we know that evil exists,” Alder said. “The real danger is that we give up and give in to that evil.”

Pennsylvania Bishop Daniel Gutiérrez invited Episcopalians in his diocese to join him May 28 as he offered prayers of lament in a livestream on Facebook.

And at Grace Episcopal Cathedral in San Francisco, California, the Rev. Jude Harmon, canon for innovative ministries, opened his sermon for the cathedral’s May 29 Eucharist by reading the names and ages of each of the 21 victims in Uvalde. He went on to suggest that the political tactics of gun rights groups like the NRA are antithetical to the teachings of Jesus.

“Some love their guns more than their children,” Harmon said. “In Christianity, we have a name for that: idolatry.”

Dean Randy Hollerith of Washington National Cathedral also addressed the Uvalde massacre in his May 29 sermon.

“This week has been devastating,” Hollerith said. “For me, there is grief beyond words.”

The carnage in Uvalde and Buffalo isn’t isolated, he continued. More than 200 mass shootings by one measure have occurred in the United States so far this year, he said, and shootings were reported just a day earlier in Maryland, Georgia and Tennessee.

“We have a serious problem with gun violence in this country, and we have to do something about it,” Hollerith said. “Jesus wants us to know, we are all connected. We are all one in Christ. These deaths are our deaths, this grief is our grief. Like it or not, we are all in this together.”