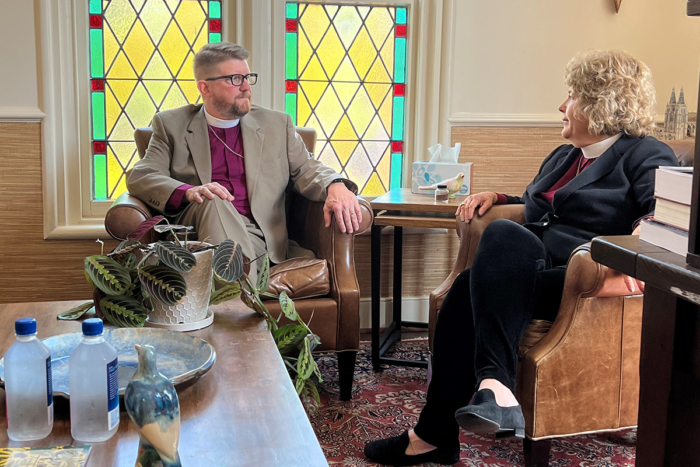 [Episcopal News Service] Episcopalians in the Diocese of South Carolina are looking to the future after the state Supreme Court, ruling largely in the diocese’s favor last month, offered a note of relative finality to the diocese’s decade-long legal battle with a breakaway group over its claim to Episcopal church property.

It was a bittersweet ending, Bishop Ruth Woodliff-Stanley emphasized in an interview this month with Episcopal News Service. The South Carolina Supreme Court’s April 20 ruling brought joy to some in her diocese and renewed grief to others. The court concluded a group that left the church and joined the Anglican Church in North America, or ACNA, must return 14 church properties it claimed in 2012 to the Episcopal Diocese of South Carolina, as well as diocesan properties that include St. Christopher Camp and Conference Center on Seabrook Island.

On the other hand, the court allowed ACNA to retain possession of 15 other church properties. “There are some folks grieving the loss,” Woodliff-Stanley said of Episcopalians in her diocese. “They had been hopeful that they might be able to return to the property that had been home to them.”

The court based its decision on a variety of factors, including whether the 29 ACNA parishes in question had created an “irrevocable trust in favor of the National Church and its diocese.” It concluded that 14 had done so and 15 hadn’t.  The ruling likely signals the final chapter in a schism begun in 2012 that forced many remaining members of the sharply diminished Episcopal diocese to join other nearby Episcopal congregations or plant new churches.

Today, the Episcopal diocese appears ready to move on. With about 7,500 members in 31 congregations, it is focused on advocating for racial and social justice in its communities, fostering healing among its congregations and “building the future church,” Woodliff-Stanley said.

At the same time, tensions appear to be easing between the Episcopal and ACNA dioceses. Woodliff-Stanley, who was consecrated in October, contacted her ACNA counterpart the day after the April 20 ruling and suggested a meeting later that day. ACNA Bishop Chip Edgar, also newly consecrated as of March, agreed, and the two met at Grace Church Cathedral in Charleston. On April 22, they sat for a joint interview with a Post and Courier reporter.

With their dioceses no longer legal adversaries, both bishops struck a cautious, conciliatory tone in the Post and Courier interview. “There’s an imperative to explore whether we can’t move forward in a very different sort of spirit than we have been in the past,” Edgar told the newspaper. Two weeks later, on May 6, the ACNA diocese announced it would not seek a review of the state Supreme Court’s ruling.

Independently, however, eight ACNA parishes filed a petition requesting their own reviews of the ruling, a process less lengthy or extensive than an appeal. “Nevertheless, we are preparing for the next steps in bringing this dispute to a resolution and charting a creative path forward for the entire diocese,” the ACNA diocese said.

Episcopal leaders consider the case effectively closed. “We feel that there is finality here, and it has been a long arc,” Woodliff-Stanley told ENS.

The Charleston-based Episcopal Diocese of South Carolina once counted as many as 78 worshipping communities across the southeastern half of the state, including along the Atlantic Coast. Parochial report data show that the diocese’s baptized membership topped 29,000 in 2011, the year before the diocese was upended by theological and doctrinal disputes, especially related to full LGBTQ+ inclusion in the church.

The disputes’ roots stretched back at least to 2003, when General Convention consented to the election of the Rt. Rev. Gene Robinson of New Hampshire as the first openly gay bishop in the church. Discontent also had been simmering under the surface because some conservative dioceses at that time still objected to women’s ordination, which convention approved in 1976. Talk of schism led to lawsuits in dioceses across the United States as conservative leaders sought to lead their congregations out of The Episcopal Church.

In December 2006, leaders in the diocese of San Joaquin were the first to vote to sever ties with The Episcopal Church. In September 2007, more than a dozen active and former diocesan bishops met to coordinate plans for developing an “Anglican union” outside of The Episcopal Church, which they’d hoped would be recognized by other Anglican provinces. Later that fall, leaders in the dioceses of Pittsburg, Fort Worth and Quincy announced plans to join their counterparts in San Joaquin in disassociating from The Episcopal Church. A similar process unfolded more gradually in the Diocese of South Carolina, which was in the middle of a leadership transition in 2006. Though Bishop Edward Salmon had turned 72, the church’s mandatory retirement age, he agreed to a request by the South Carolina Standing Committee to continue to serve as acting bishop until the consecration of his successor, Bishop Mark Lawrence, in January 2008.

In October 2009, a majority of delegates at a special diocesan convention voted to authorize Lawrence and the South Carolina Standing Committee to begin the process of disassociating from The Episcopal Church over General Convention resolutions that endorsed greater LGBTQ+ inclusion in the life of the church. South Carolina leaders accelerated their plans to leave the church in 2012 after General Convention approved rites for blessing same-sex unions.

In October 2012, the newly established Disciplinary Board for Bishops concluded that Lawrence was guilty of abandoning the church because of legal and canonical steps he and other diocesan leaders had taken to sever their Episcopal affiliation. Then, in November 2012, a majority of attendees at a special diocesan convention affirmed the actions of Lawrence and the standing committee, effectively leaving the church.

“The Episcopal Diocese of South Carolina continues to be a constituent part of The Episcopal Church, even if a number of its leaders have departed,” then-Presiding Bishop Katharine Jefferts Schori said in a pastoral letter issued two days before the special convention vote. “I want to urge every parishioner and cleric in South Carolina to recognize that, as long as you wish to remain in The Episcopal Church, no leader, current or former, can exile you, remove you, or separate you from it without your consent.”

Episcopal membership in the diocese dropped below 6,400 right after Lawrence and his followers departed. The remaining diocese counted 22 continuing parishes and missions. Since then, Episcopalians in South Carolina have found ways to worship and serve their communities amid a series of legal victories and setbacks in the church property lawsuit.

Of the Episcopalians whose churches were claimed by ACNA after the 2012 split, some began forming new congregations – meeting in living rooms, on boat docks, in taverns and in a funeral home. Because of such church planting, the diocese has welcomed nine new congregations and worshiping communities in the past decade, such as St. Catherine’s Episcopal Church, now worshiping in a former shoe store in Florence.

On Edisto Island southwest of Charleston, the vestry of Trinity Episcopal Church voted in 2012 to leave The Episcopal Church. Members who wanted to remain Episcopalians began worshipping instead in homes with the help of retired priests. As attendance grew, services moved to a local barbeque restaurant, and in 2013, the congregation began leasing the sanctuary of the New First Baptist Missionary Church, where it worships today as The Episcopal Church on Edisto.

Northwest of Charleston, in Summerville, Episcopalians previously had worshiped at St. Paul’s Episcopal Church. Like Trinity Episcopal Church, St. Paul’s was one of the properties claimed by the breakaway group, and both churches will remain with the ACNA diocese under last month’s court ruling. After 2012, about 30 former members of St. Paul’s began worshipping in homes, a library and a United Methodist Church before renting and renovating a commercial space to serve to house the congregation now known as Episcopal Church of the Good Shepherd.

“They’ve done all manner of things,” Woodliff-Stanley said of the Episcopal congregations that reorganized themselves. “They haven’t forgotten that that’s part of both the pain and the courage that they’ve had.”

Good Shepherd has thrived since the split and now counts about 150 members, most of whom have no ties to St. Paul’s, according to the Rev. Dow Sanderson, who has served as Good Shepherd’s priest-in-charge since 2017.

“They’re not looking back. They’re ready to move on,” Sanderson told ENS. Even members with deep generational ties to St. Paul’s were accepting of the court ruling that left their former church in ACNA’s hands, he said. “We’d already sort of settled that in our minds … We’re going to grow and prosper and be The Episcopal Church in Summerville.”

The Episcopal and ACNA dioceses now are in talks about how to carry out the court’s order that 14 church properties be returned to the Episcopal diocese. While eight of the ACNA parishes that had been worshipping in those churches ask for a review of the decision, no one has contested the transfer of the other six church properties.

Diocesan leaders also are working out the transfer of St. Christopher Camp and Conference Center back to the Episcopal diocese. The facility, located south of Charleston on Seabrook Island, is a test of the dioceses’ ability to work out differences amicably, Woodliff-Stanley said. She called it “an opportunity to begin developing a model that we hope will be grounded in Gospel values, a model for how to work together across these lines of difference.”

And with the court case mostly resolved, “we’re eager to redirect resources toward the more central aims of the Gospel and away from conflict,” Woodliff-Stanley said. “How do we now walk together in the work of enacting the Supreme Court’s decision in a way that has the highest possible reflection of Gospel values?”