[House of Deputies News] Legislative committee officers for the 80th General Convention met with the Presiding Officers’ General Convention Design Group on May 25 to discuss a revised legislative process for the convention, which has been shortened from eight days to four due to COVID-19 concerns and now is planned for July 8-11 in Baltimore, Maryland.

Bishop Sean Rowe, parliamentarian of the House of Bishops and co-chair of the design group, announced that if the group finalizes its current recommendations, June 6 would be the deadline for submitting resolutions to be considered at the convention. He urged committee officers to file preliminary legislative reports on the resolutions they have already received with the General Convention Office by June 10 so resolutions, amendments, consolidations and substitutions could be entered into the office’s legislative tracking software. He asked committees to complete their work by June 25. 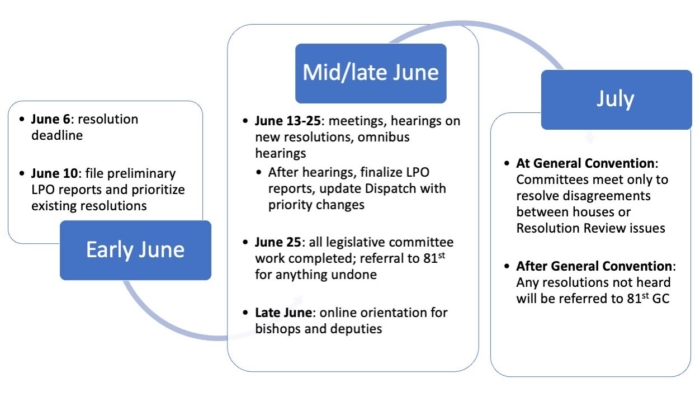 If the current draft of the design group’s recommendations are endorsed by Presiding Bishop Michael Curry, the Rev. Gay Jennings, president of the House of Deputies, and other key church bodies, every House of Deputies committee would be required to hold at least one additional “omnibus” hearing before the June 25 deadline, said Bryan Krislock, parliamentarian of that house, and co-chair of the committee. This was necessary, he said, because the house’s rules require a hearing be held on every resolution that is filed. The omnibus hearing is also a final opportunity for individuals to testify on previously considered resolutions.

According to the design group’s current plan, all committees will arrive in Baltimore with their work completed and no legislative committee will need to meet in person at General Convention. The only reasons a meeting would be permitted, Rowe said, is if committees need to consider a floor amendment or if the Resolution Review Committee of the houses identified problems with a resolution that needed to be corrected.

Concerns from committee leaders regarding the compressed, online schedule included whether the tight time frame in which they were now working would allow them to schedule interpreters for their meetings; whether the General Convention Office would accommodate requests for meetings on dates outside a June 13-25 window it has offered for the revised legislative process; whether the office will enter resolutions into its tracking system and return them to committees in time for consideration before June 25, and whether quorums could be gathered for the quickly scheduled meetings required to meet the June 25 deadline.

“If you are having trouble getting time slots, let us know,” Rowe said in response to one question, about scheduling meetings at times that would fit committee members schedules. “I think we can make it work, whatever your committee is going to need.” When the question resurfaced, he said the General Convention Office had assured the design group it would have “a more flexible process,” in scheduling this round of meetings.

Numerous online commenters have expressed concern about whether a convention focused on what Presiding Bishop Michael Curry referred to as “matters essential for the governance and good order of the church” would exclude social justice resolutions. Leaders of The Consultation, a collection of progressive organizations within the church, urged that this not happen in a letter today to Curry, Jennings, members of Executive Council and voting members of the convention.

The design group did not speak directly to this question but sketched out a larger process of prioritization in an email attachment to committee officers that accompanied the Zoom link to the May 25 meeting.

To prioritize the resolutions before each committee, the design group suggested a set of questions.

“We know that for some of you, this is like asking you to pick between your children … and others already know exactly how they will prioritize,” said Michael O. Glass, vice chancellor to the House of Deputies and chair of its Resolution Review Committee. For those in the middle, he said, he hoped the questions would be helpful.

“Once legislative committee officers have determined their priority for the resolutions assigned to them, they are asked to communicate it to their Dispatch of Business liaisons as soon as possible,” the chairs wrote.

In the Zoom meeting, Ryan Kusumoto and Bishop Wendell Gibbs, chairs of their respective Dispatch of Business Committees, urged committee chairs to establish priorities as soon as possible. “We understand these could change,” Kusumoto said. “Keep sending us those updates.”

Deputies and bishops would be “watching time really closely from Day 1,” he said, and the dispatch committees were eager to “prioritize the priorities” once they had them so they could build legislative schedules.

Krislock said the House of Deputies would be asked as one of its first orders of legislative business to adopt a special Rule of Order for the convention, including:

Rowe emphasized that committee chairs should not hesitate to determine that a resolution be deferred until the next convention. “There is no shame in this,” he said. “It is no reflection on your leadership. What we are doing now is trying to play the hand we were dealt.”

A rule change also will be required to permit elections of a new president and vice president of the House of Deputies within the context of a four-day convention, Krislock said.

Gibbs said the House of Bishops, which operates under different rules of order, will take such action as necessary to accommodate the process currently in development.

“You will do what you need to do,” Rowe told committee officers as an informal benediction. “You will do the best you can, and that’s okay. We’ll figure this out.”