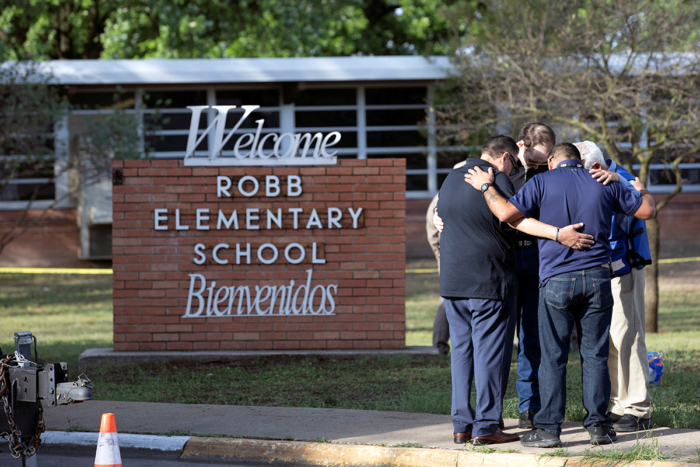 People gather May 25 at Robb Elementary School, the scene of a mass shooting in Uvalde, Texas. Photo: Reuters

The 18-year-old gunman opened fire midafternoon May 24 at Robb Elementary School in Uvalde, a city of 15,000 people about 80 miles west of San Antonio. The attacker, identified as Salvador Ramos, a student at a nearby high school, carried out the massacre inside one classroom and died at the scene, according to authorities.

“Words of outrage are not enough to express our hatred of this evil done to little children who simply went to school this morning. Expressions of sorrow scarcely touch the depth of families’ grief tonight,” West Texas Bishop David Reed wrote in a call to prayer posted on the diocese’s website. “What we have to offer is ourselves. To turn ourselves, our hearts and minds, to those who are suffering in Uvalde – to reach out our hands to lift up and to extend our arms to embrace – this is what we have to offer, following the example of our Lord Jesus Christ. … And we can pray. We must pray.”

He also referenced St. Philip’s Episcopal Church as part of the community of Uvalde that now is reeling from the tragedy.

Curry prayed for God to “surround us with your love as we face another tragedy of gun violence,” in a prayer mourning the victims that was livestreamed on Facebook hours after the massacre.

The attack was the deadliest at an American school in nearly 10 years, since the December 2012 shooting at Sandy Hook Elementary School in Newtown, Connecticut, left 20 children and six educators dead.

“The circumstances of the Uvalde shooting are strikingly reminiscent of our own Sandy Hook tragedy,” Connecticut Bishop Ian Douglas and Bishop Suffragan Laura Ahrens said in a joint online statement. “The facts bring back the awful memories and feelings of 10 years ago. Trauma is real, and the trauma that we all felt from Sandy Hook has surfaced again with the realities of yesterday’s horror.”

Douglas and Ahrens said they had reached out to Reed offering love and prayers “as companion bishops who, sadly, have sat in the same seat he now occupies.”

The violence in Uvalde occurred just 10 days after another gunman unleashed a rampage at a grocery store in Buffalo, New York, leaving 10 people dead, all Black, in what authorities have labeled a hate crime. A day later, a gunman opened fire during a luncheon held at a Taiwanese Presbyterian church in suburban Los Angeles, California, with the intent “to execute” as many people as possible.

“God of righteousness, you have granted our leaders, our president, the governor, members of Congress, the courts and legislatures power and responsibility to protect us and to uphold our right to life, liberty and the pursuit of happiness,” Curry said in his livestreamed prayer. “Strengthen their devotion and our devotion to our common life, to find clarity of purpose for all.”

The Episcopal Church has advocated at least since the 1970s for legislation seeking to reduce the risk of gun violence in the United States. “Decades later, we see gun violence continuing on a daily basis, in communities with high rates of violence, especially in communities of color, in domestic disputes and in violence against women, in suicides, and in mass shootings,” the church’s Washington, D.C.-based Office of Governmental Relations said in a statement posted in response to the shooting in Uvalde.

The 80th General Convention is scheduled to consider at least one gun-related resolution in July, pertaining to the dissemination of untraceable firearms known as “ghost guns.”

The nonprofit organization Gun Violence Archive, which tracks mass shootings, defined as those with four or more fatal or injured victims, has counted at least 213 such attacks this year, as of mid-May. The total in 2021 was 693 mass shootings.

Using different criteria, the FBI identified 61 “active shooter” incidents in 2021 – a one-year increase of 50% – that killed 103 people and wounded 140. Overall, gun violence kills about 40,000 people in the United States, about 60% of those deaths from suicide.

Even so, efforts to pass new gun restrictions and safety measures routinely face insurmountable barriers in Congress, where pro-gun groups like the National Rifle Association have been successful in blocking them. In Texas, known as one of the least restrictive states for gun ownership, Gov. Greg Abbott is among the Republican leaders scheduled to appear at an NRA convention in Houston on May 27.

Such opposition to gun safety reforms generally runs counter to public opinion. Only a third of Americans personally own a gun, and a majority of Americans agree with The Episcopal Church that stricter gun regulations are needed, according to Gallup polling.

TX Gov @GregAbbott_TX says the gunman in #UvaldeTX "horrifically [and] incomprehensibly" killed 18 students and a teacher.

“Our political system is so paralyzed, and our politicians are so timid, that we are unable and unwilling to take the most reasonable of measures to help prevent these mass shootings. That is horrific and incomprehensible,” wrote the Very Rev. Randy Hollerith, dean, and the Rev. Leonard Hamlin Sr., canon missioner, of Washington National Cathedral in a May 24 statement, the last words echoing Abbott’s description of the Uvalde massacre.

“If the death of innocent children does not shake us from our slumber, there is only one way to describe the future we are building for ourselves: horrific and incomprehensible. … We have become numb to the violence all around us. We are failing our children and each other. May God have mercy on the families of Uvalde – and may God have mercy on us all.”