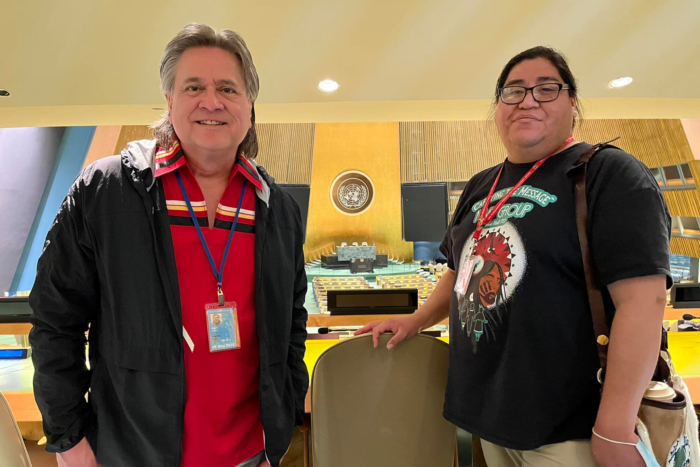 The Rev. Bradley Hauff, The Episcopal Church’s missioner for Indigenous ministries, left, and Ronald Braman from the Diocese of Idaho pose for a photo inside the United Nations building in New York during the Permanent Forum on Indigenous Issues from April 25 to May 6. Photo: Lynnaia Main, via Facebook

[Episcopal News Service] Episcopal leaders have been increasingly focused this spring on highlighting Indigenous issues, particularly The Episcopal Church’s past involvement in the federal Indigenous boarding schools system, as the church prepares to consider acting on those issues in July at the 80th General Convention.

Episcopal engagement with Indigenous issues is occurring both within the church and with ecumenical and global partners, including at the recently concluded United Nations Permanent Forum on Indigenous Issues. A small Episcopal delegation attended the annual forum in New York and online April 25 to May 6. The theme of this year’s forum was “Indigenous peoples, business, autonomy and the human rights principles of due diligence including free, prior and informed consent.”

The Rev. Bradley Hauff, The Episcopal Church’s missioner for Indigenous ministries, told Episcopal News Service, that the U.N. forum’s emphasis on “free, prior and informed consent” resonated with him and the other Episcopalians who participated. It underscored for them the importance of tribal autonomy and self-determination, both of which European settlers and later the United State government so often took from Native Americans.

Nowhere was the violation of free, prior and informed consent more apparent, Hauff said, than in the forced assimilation at boarding schools – “when you have children taken from their homes and forced into an educational process where they don’t know what they’re getting into … when they have everything about them that’s Indigenous taken away.”

Hauff, a member of the Oglala Sioux tribe, was joined at the U.N. forum by Ronald Braman from the Diocese of Idaho, who is Shoshone, as well as Lynnaia Main, the church’s representative to the United Nations. The Rev. Tina Campbell, Cherokee from Northern California, and Melissa Skinner, Standing Rock Sioux from South Dakota, participated in some of the online discussions.

The Permanent Forum on Indigenous Issues was formed by U.N. resolution in 2000 to focus on Indigenous issues related to economic and social development, culture, the environment, education, health and human rights. Its first meeting was held in 2002. It has continued to offer opportunities each year for Indigenous peoples to provide expert advice to global leaders through the U.N.’s Economic and Social Council, or ECOSOC, and to inform U.N. agencies working on a variety of international issues, from human rights to the environment.

Because The Episcopal Church is an ECOSOC-accredited nongovernmental organization, the Episcopal delegation was able to submit two official statements to this year’s Permanent Forum. One called attention to the problem of missing and murdered Indigenous women as a human rights crisis. The other stressed the importance of preserving Indigenous languages, including through liturgies and songs at Episcopal worship services.

The delegation also helped organize a faith-based conversation on Indigenous issues in the United Nations’ chapel on May 4, followed by an interfaith worship service led by Hauff.

“There is a hunger and desire within the faith-based community to organize, to talk to each other about these issues,” Main said in an interview with ENS. Many religious denominations that participate in the U.N. forum have Indigenous members, maintain ministries that work with Indigenous peoples or advocate for policy reforms that affect them.

Main added that it was “enormously important” to return to an in-person gathering, even though the U.N. only allowed each organization three registered participants. “If we want to try and engage with member states who are the decision-makers, we’re not going to get anywhere with them just by sending emails or asking them to set up a Zoom meeting,” she said.

The issue of Indigenous boarding schools provided some context for the discussions but wasn’t addressed directly as part of the U.N. forum, Hauff said. Five days after the forum ended, however, the Department of Interior shined a new spotlight on schools when it released its May 11 report from the first part of a federal investigation into the system.

In the report investigators said they had identified 408 such schools across 37 states or territories from 1819 to 1969. Marked or unmarked burial sites have been found at 53 of the schools so far.

“The consequences of federal Indian boarding school policies — including the intergenerational trauma caused by the family separation and cultural eradication inflicted upon generations of children as young as 4 years old—are heartbreaking and undeniable,” Secretary Deb Haaland said in announcing the report. “We continue to see the evidence of this attempt to forcibly assimilate Indigenous people in the disparities that communities face.”

Although the report doesn’t go into details about the schools run by The Episcopal Church and other religious denominations, Hauff told ENS that it sheds new light on the coordination between churches and the federal government.

The report “did an excellent job of explaining how Indigenous boarding schools fit into the whole systematic agenda of assimilating Indigenous people into America culture,” Hauff said. “And it’s a history that unfortunately a lot of Americans are unfamiliar with.”

At least eight schools were thought to have Episcopal Church connections, though the dearth of churchwide records has made it difficult to fully account for the church’s role.

Presiding Bishop Michael Curry and the Rev. Gay Clark Jennings, president of the House of Deputies, have pledged to “make right relationships with our Indigenous siblings an important focus” of General Convention’s upcoming work. In a joint statement last year, they acknowledged the church’s past complicity in the federal boarding school system.

Executive Council, in a vote at its April 2022 meeting, affirmed the church’s commitment to researching and confronting that history, and it ordered the creation of a Committee for Indigenous Boarding Schools and Advocacy. The 15-member committee will be asked to gather information on boarding schools with Episcopal ties, to tell the story of the schools’ impact and legacy and to develop a plan for storytelling and advocacy centered on unequal treatment of Native Americans in the past and present.

Questions asked by the committee will include how many boarding schools had Episcopal ties, how many students attended, how many were sick or died there far from their homes, which church institutions founded and funded the schools and what is the current status of the schools?

Hauff said Executive Council’s action lays the foundation for additional discussion and response by General Convention. To further minimize the risk of COVID-19 transmission the dates, duration and scope of the July meeting of the church’s triennial governing body are still being finalized, though church leaders have identified Indigenous boarding schools a priority as they determine what gets taken up at the meeting in Baltimore, Maryland, and which issues will be put on hold until the 81st General Convention in 2024.

Dioceses also are engaging in Indigenous issues in new ways this year. The Diocese of Northern Michigan, for example, announced on May 17 that it had named Miskopwaaganikwe Leora Tadgerson as director of diversity, equity and inclusion, with responsibilities that include promoting the diocese’s truth-telling and racial reconciliation efforts.

And on May 5, at an online budget hearing held by General Convention’s Joint Standing Committee on Program, Budget and Finance, the bishops in Alaska, Navajoland, North Dakota and South Dakota urged church leaders to renew and even increase the block grants the dioceses receive to support their growing Indigenous ministries.

“Without the help of the General Convention budget, we just would not be able to do what we do,” Alaska Bishop Mark Lattime told the committee.