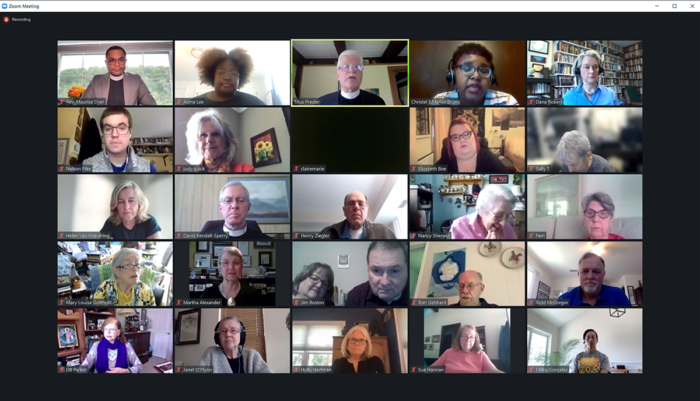 [Episcopal News Service] The annual conference of the Global Episcopal Mission Network began online on May 12 by highlighting women’s commitment to spreading the Christian faith both in the United States and abroad.

Mission work has been the primary way women have engaged in ministry over the years, beginning with the earliest days of the church when widows, virgins and deaconesses all played a role in the church’s ministry, said Dana Robert, a professor at Boston University School of Theology and director of the Center for Global Christianity and Mission.

“If you read medieval history and up through the history of Christianity, one thing is the constant struggle of women to serve,” she said. 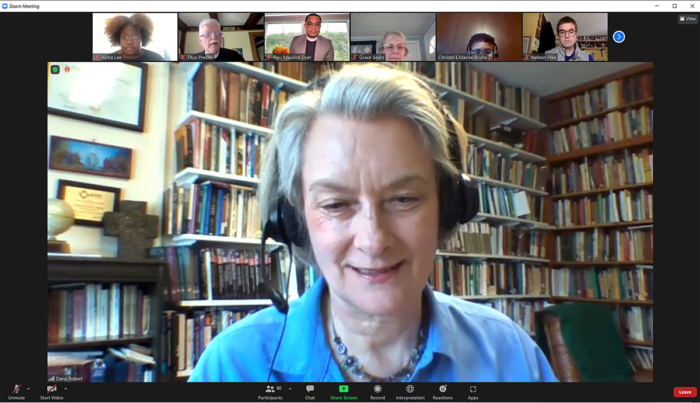 Professor Dana Robert spoke on the history of women’s efforts in mission from the earliest days of Christianity to today during a May 12 plenary session. Screenshot: Melodie Woerman

Over 150 people from 19 countries registered to attend GEMN’s May 12-14, “Women in Mission” themed, livestream conference. GEMN is an association of individuals, parishes, dioceses and organizations with a passion for mission; it works to equip and encourage the church’s work in global mission.

In his opening remarks, the Rev. Titus Presler, president of the GEMN board of directors, noted the event was taking place during Eastertide “when we’re always aware that the first witnesses to Jesus’ resurrection were women, that they testified boldly to their experience, and that they were disbelieved.” Christianity, he said, always has been a majority female faith, and, he added, the worldwide missionary movement is at least two-thirds women.

Robert highlighted women’s role in the Christian faith during her plenary address “Talitha Cumi” (“Little Girl Arise”), the words Jesus spoke when raising Jairus’s daughter from the dead, recounted in Mark 5:41. Robert said, “These are the only words recorded in the Bible, in the New Testament, in his own language, Aramaic. So they tell us that Jesus cared about the well-being of women.” Throughout Episcopal Church mission history, unmarried women outnumbered male missionaries and served all over the world, she said.

In the United States, women played key roles in the work of spreading the gospel, and by 1910, 44 different denominations, including The Episcopal Church, had created women’s missionary societies. Julia Chester Emery, who created the United Thank Offering in 1889, worked tirelessly until her retirement in 1916 to expand the work and reach of the Woman’s Auxiliary of the Board of Missions, the precursor to National Episcopal Church Women. Emery’s efforts, like those of other women’s missionary societies, primarily were outreach to other women. “One of their mottos was called woman’s work for women,” Robert said, “and it’s assumed that any work done by a woman for a woman includes work for children.” 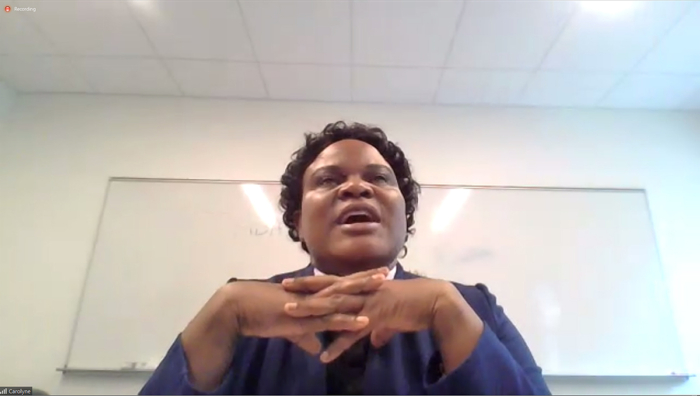 The Rev. Carolyne Adhola, a priest of the Anglican Church in Kenya, describes her work to combat gender-based discrimination and to spread the gospel, through the Mothers’ Union during the first day of GEMN’s May 12-14 conference. Screenshot: Melodie Woerman

When technical difficulties prevented the first day’s planned second plenary, the Rev. Carolyne Adhola, a priest of the Anglican Church of Kenya stepped in to offer her story. Speaking from Virginia Theological Seminary where she is studying, Adhola said she has been involved as a lay leader in mission through the Mothers’ Union for more than 20 years. “For us as Mothers’ Union, we believe that God has called us and that our mission practices must be contextual.” Members in her country contextualize their mission, she said, by reaching out to different women’s groups, “especially [those serving] people who are marginalized, like the widows, the orphans, single mothers, the elderly,” and by connecting with Muslims, Hindus, Pentecostals and followers of traditional African religions.

One thing the Mothers’ Union is trying to address in Kenya still today is the reality that women don’t have land ownership rights. “The land belongs to the man, even when you’re married. And unfortunately, when your husband dies, the land does not belong to you,” said Adhola, who experienced this herself when at 23 she was widowed when her husband died in an auto accident.

The conference continues through May 14 and includes additional livestream plenary sessions and workshops.