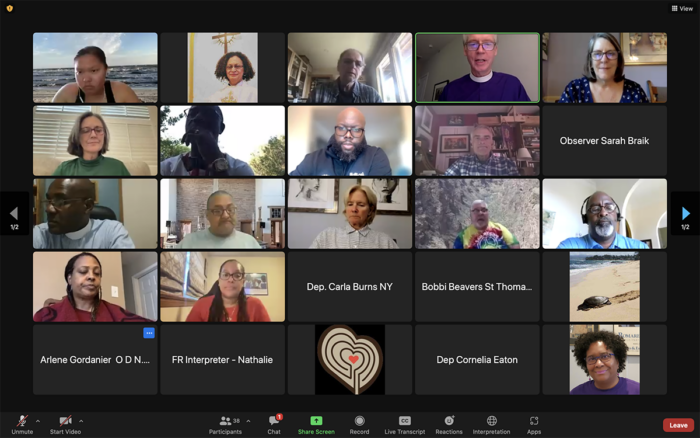 For the first time, two-dozen bishops’ and deputies’ committees are holding hearings together online in advance of the upcoming 80th General Convention. The Racial Justice and Reconciliation committees met on May 11.

[Episcopal News Service] General Convention’s committees on Racial Justice and Reconciliation received testimony about resolutions to further and extend Beloved Community and the healing of intergenerational trauma resulting from the destructive effects of racism and white supremacy during a May 11 online hearing. The committees also engaged in discussion about appropriate inclusive language to refer to People of Color.

For the first time, two-dozen bishops’ and deputies’ committees are holding hearings together online in advance of the upcoming 80th General Convention. The triennial convention is the church’s governing body, where final resolutions are considered and voted on by both the House of Bishops and the House of Deputies. For a schedule of online hearings, click here.

Julia Ayala Harris, chair of The Episcopal Church’s Standing Committee on Mission and a candidate for the president of the House of Deputies told committee members that the “time is right to make a reality” Resolution A125, which would establish a voluntary Episcopal Coalition for Racial Equity and Justice among dioceses and congregations. 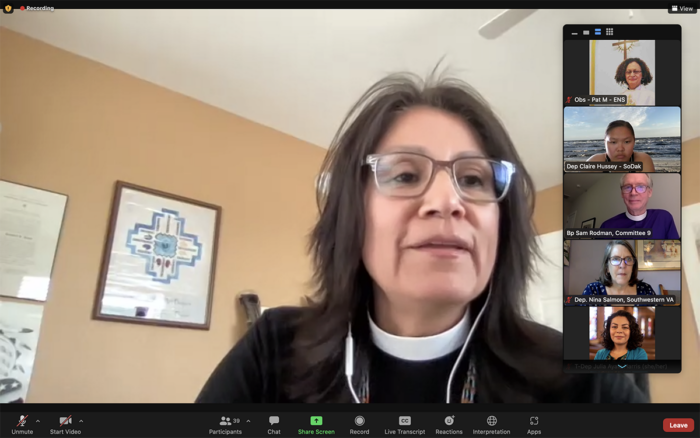 The Rev. Cornelia Eaton described her mother’s terror at being sent to a New Mexico boarding school during the May 11 hearing.

The Rev. Cornelia Eaton, canon to the ordinary in the Navajoland Area Mission and part of its General Convention deputation and a member of Executive Council, described her mother’s terror at being sent to a New Mexico boarding school when supporting Resolutions A127 and A128. The resolutions call for “a comprehensive investigation of the church’s ownership and operation of Episcopal-run Indigenous boarding schools” and would also facilitate healing from their effects, respectively.

Eaton said A127, which also calls for the hiring of one or more research fellows to work with The Archives of The Episcopal Church to assist the investigation, would help Native people “move toward healing and reconciliation which, for many, will take time. This is another beginning for the church to respond to reparations and restore healing justice in God’s kingdom.”

In July 2021, Curry and Jennings issued a statement lamenting the church’s involvement in operating Indigenous boarding schools and called Executive Council to deliver a comprehensive proposal for addressing the legacy of Indigenous schools at the 80th General Convention.  The presiding officers called for earmarking resources for independent research in the archives of The Episcopal Church, options for developing culturally appropriate liturgical materials and plans for educating Episcopalians across the church about this history, among other initiatives.

Resolution A127 would allocate $125,000 and Resolution A128, would allocate $300,000 to invest in community-based spiritual healing centers to address intergenerational trauma through mental health and substance abuse counseling, traditional forms of healing and other services desired by the local community.

Eaton, program director for the Hozho Wellness Center, a ministry of the Navajoland Area Mission, noted that native people are at greater risk of dying by suicide than other Americans. Both resolutions, proposed by the Presiding Officers’ Working Group on Truth Telling, Reckoning and Healing, speak to the need for healing from intergenerational trauma. “I understand that healing won’t be easy,” she said. “However, we need to go through it in order for us to come back into harmony with one another.”

When testifying in support of Resolution C036  which proposes $2 million to extend the work of the Beloved Community, Miriam Casey, said the funding has assisted the Diocese of Northern California in three important efforts over the past three years: the creation of racial reconciliation workshops; funding basic instructional needs of an underfunded elementary school serving primarily Latino, immigrant and undocumented children; and hiring an Indigenous-led consulting firm to lead congregations through the process of developing land acknowledgments that build on meaningful relationships with the local Native communities.

“This process will be a model for other churches in our diocese,” said Casey, representing the diocesan Commission for Intercultural Ministries. “These projects were about telling the truth about racial inequities in our communities, imagining what it would be like if those inequities were not present, growing in our capacity to love and taking action to address inequities created by racism,” said Casey, noting that the efforts would not have been possible without funding from the Becoming Beloved Community grants.

Discussion of Resolution A131, proposed by the Presiding Officers’ Working Group on Truth Telling, Reckoning and Healing would establish the phrase “people of color” when referring to communities in the church, that do not exclusively identify as white.

The Rev. Nina Salmon, Southwest Virginia deputy and committee secretary, sparked lively discussion when she asked if the term “BIPOC” or Black, Indigenous and people of color was a preferable term.

The Rev. Leon Sampson, a deputy from Navajoland Area Mission, and others told the meeting that BIPOC leaves out references to Latino and Asian Americans and is considered offensive. “I feel like it takes away from the uniqueness of our history. It takes away from the historical racial ideology that has happened.”

New York Deputy Diane Pollard, a member of Executive Council, said she found the acronym offensive and exclusionary. “So many of us, who do this work have been working so long to be inclusive. Reducing everyone to five letters for the convenience of society to me, there is something very wrong about that.” 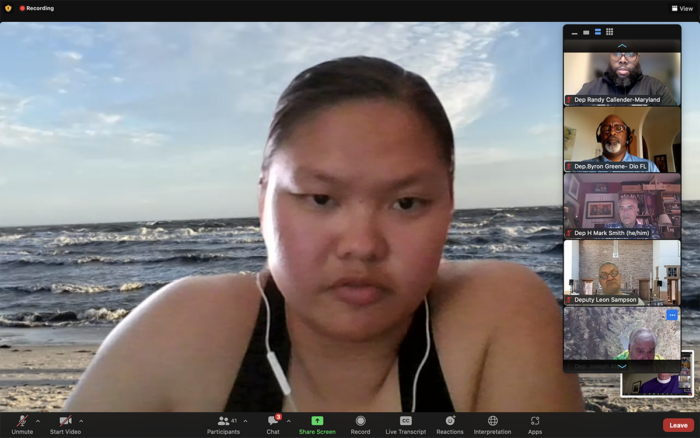 South Dakota Deputy Claire Hussey testified to her dislike of the acronym BIPOC.

South Dakota Deputy Claire Hussey, the assistant committee secretary, said: “As a young adult, an Asian American, I don’t really appreciate the term BIPOC. That makes it seem like if you are Black, or if you are Indigenous, you are somehow separate from people of color. Then you’re lumping in people like Latina, Latinx, Asian American, anyone else that is not identifying themselves as white into the separate category that’s not as important to recognize as Black or Indigenous. If we switch over to ‘people of color’ … that makes it sound like we’re all people that are not in that racial majority. And I think that inclusivity is important because it puts all of those ethnicities and a sort of united understanding that no, none of us, are truly in that racial majority.”

–The Rev. Pat McCaughan is a correspondent for Episcopal News Service, based in Los Angeles.