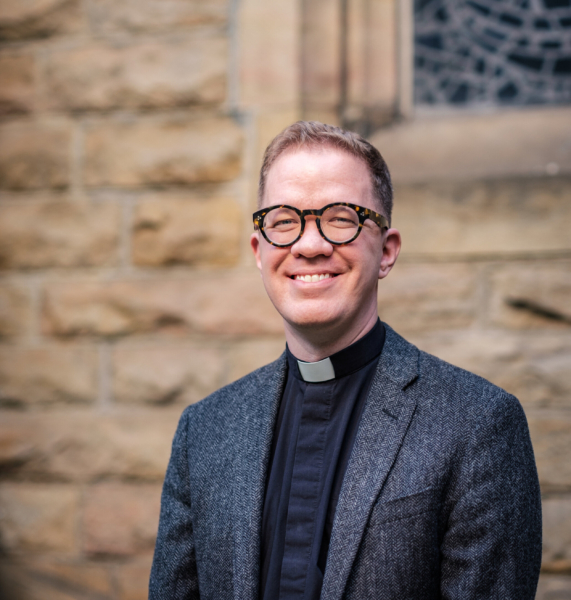 Editor’s note: The story has been edited to accurately reflect The Episcopal Church’s position on same-sex relationships.

[Episcopal News Service] To some, the Rev. Wesley Hill might embody contradiction: an openly gay man who is opposed to same-sex marriage and advocates celibacy for gay Christians, serving in a church that is fully inclusive of LGBTQ+ people. But Hill is part of an emerging network of LGBTQ+ Christians who share his beliefs – a loosely defined community nicknamed “Side B” that he helped foster.

Hill, 40, is an associate professor of New Testament studies at Western Theological Seminary in Holland, Michigan, and a priest serving at Trinity Episcopal Cathedral in Pittsburgh, Pennsylvania. In 2010, his book “Washed and Waiting: Reflections on Christian Faithfulness and Homosexuality,” articulated an uncommon, nuanced approach to Christian sexuality that diverged from the much louder voices on the right and left. In that and other writings, he has argued that the evangelical “ex-gay” movement – which views homosexuality as a disorder that can and should be cured with conversion therapy – is harmful and immoral. However, he also professes a traditional view on marriage and sex, believing it is reserved by God for procreation and that gay people are called to celibacy.

The view that he helped popularize – accepting gay orientations as neither inherently sinful nor appropriate for sex and marriage – spawned a mostly online movement among LGBTQ+ Christians that came to be called Side B. It offers an alternative to “Side A” Christianity – the more liberal view espoused by The Episcopal Church and other denominations that perform same-sex marriages and do not view gay sex as sinful. Side B Christians are openly LGBTQ+ people who choose lives of celibacy, and who may instead pursue deep spiritual friendships or committed partnerships that do not involve sex.

The Side B community is most associated with people who were raised in Roman Catholic and evangelical churches that explicitly label gay sex as disordered and sinful. In contrast, The Episcopal Church does not have a codified doctrine on sex and marriage; canonical courts have ruled that issues of sexuality are not part of the “core doctrine” expressed in the creeds. In 2015, in the wake of the June 26 U.S. Supreme Court ruling legalizing same-sex marriage for all Americans, General Convention followed suit with canonical and liturgical changes to provide marriage equality for Episcopalians.

So what is it like to live a Side B life in a Side A church? Episcopal News Service spoke to Hill about his experiences and beliefs. This interview has been edited for clarity and length.

Hill: I grew up in Arkansas in a pretty vibrant Southern Baptist church and then we switched to a conservative non-denominational evangelical church. I did my undergraduate degree at Wheaton College, which is very much evangelical. In the early 2000s, there were a lot of students who were discovering Anglicanism – this was in the days leading up to the split between the [Episcopal] church and the Anglican Church in North America.

My friends invited me to come along – I think my first service that I went to was a Maundy Thursday service, and I was both kind of weirded out by the liturgy, which felt very unfamiliar, as well as attracted to it and sort of magnetically drawn to it. But it wasn’t until several years later, when I moved to the U.K. for grad school, that I got confirmed in the Church of England.

When I first moved back to the U.S. in 2012, to be totally honest, I didn’t know a whole lot about The Episcopal Church. I knew that I thought of myself as more conservative on sexuality. And so I, without too much forethought, started worshipping at Church of the Ascension in Pittsburgh [which seceded from The Episcopal Church to join the ACNA in 2008]. I was there for two or three years and was really wrestling with a sense of calling to ordination and feeling that although I love many people in the ACNA, and I think big ministry is happening, I could not in good conscience join the group that wanted to split over sexuality.

I taught at Trinity School for Ministry, which at that time was still an officially recognized seminary of The Episcopal Church, and there was an Episcopal priest who was on staff and so that was kind of how I found my way into The Episcopal Church. I was ordained to the diaconate in October 2019 and then to the priesthood in September 2020.

ENS: What influences did you have in developing your understanding of a celibate gay Christian life? How did that arise in your life?

Hill: I realized I was gay when I was in my early adolescent years. In my context, there was no possibility of [a church] being affirming. I didn’t even know that that category existed. And so later when I was really wrestling both personally as well as theologically, I got into some of the conversations about what is an appropriate Christian way to be gay, to live out one’s sexuality. A couple of writers were really important for me – one was Henri Nouwen, and he wasn’t out during his lifetime, but subsequently, biographers unearthed the fact that he had lived a, by all accounts, celibate gay life, and I deeply resonated with a lot of his writing on spirituality and psychology and loneliness in particular. The other writer who was really influential on me was a woman named Eve Tushnet. She was blogging a lot about friendship and about this neglected form of love, and I very much resonated with that.s

ENS: In the time you’ve been in The Episcopal Church, what has it been like to watch the church adopt increasingly liberal positions on homosexuality?

If you look at the official prayer book of The Episcopal Church, the marriage liturgy is something that I completely agree with. It’s still quite traditional. My own view is that same-sex marriage is not in line with the will of God as revealed in Scripture. And yet, I also want to say I could be wrong about that conviction. And I think that the church operates in terms of centuries, not years or decades. I feel a happy obligation to keep listening to people who disagree with me and keep engaging in dialogue. And I really hope that my progressive brothers and sisters would feel the same way toward me.

ENS: How can Side A and Side B come together? In one essay, you wrote about developing a vision that’s “compatible” among people who hold different convictions. What might that look like?

Hill: I’ve been thinking recently about what would it look like to actually think of one another’s differing positions in the best possible light, the most charitable light? So rather than saying, “My progressive friends are simply ignoring the clear teaching of Scripture and revising things in light of the cultural moment,” I could say instead, “There’s something about the Gospel that is driving them. It’s a compassion for people who have been alienated by the church. It’s a desire for LGBTQ people to be fully integrated into the life of the church and not made to live in shame.” I can view the position in the light of Christian charity, even if I don’t end up agreeing with it, and vice versa. I hope that my progressive friends in The Episcopal Church could say, “Wes, this is not inherently self-hating. This is not tantamount to racist bigotry or something. But there’s a sincere effort to try to stay faithful to what the church has historically taught, even if we think that that teaching should change or maybe has been misunderstood.”

Hill: I sent a message to another Episcopal priest and I said, “Can you think of any other Side B clergy?” And he said no. It seems to be more in the evangelical world and the Catholic world. There are a handful of [Episcopal] lay people that I know of, but I can’t think of any clergy.

Several decades ago there were major voices in The Episcopal Church promoting things like conversion therapy, you know, this wasn’t just the evangelicals or the charismatics. Some of those folks are still around and view my position as being like a drift toward progressivism. There’s a kind of energetic, resurgent conservative movement, you know, the Communion Partners movement, and there’s a lot of younger clergy and laity who are associated with that and I think they view me as someone whose viewpoint and whose life they want to support. So I felt a lot of encouragement from them. But I would say even from progressive folks who disagree with me, I mean, certainly not all of them, but a lot of the younger ones recognize the complexity of this and many of them are gay themselves. And I know how difficult it is to try to figure out what it looks like to live one’s life in a flourishing way. So I have felt a lot of hostility from them toward viewpoints that I hold, but not hostility toward me as a person. It’s been kind of lovely to connect with some people who I know see things differently, but they want to support me as an individual, even if they think the viewpoints that I stand for are ultimately harmful.

ENS: Is it frustrating being caught between two sides that see themselves as mutually exclusive?

Hill: Yes, it is. One of the surprises for me is that I’ve gotten a lot more pushback from conservatives than I have from progressives. I thought it would be progressives who would object to it more. We have a number of gay and queer people who come to the parish where I serve, and I hope that they feel very warmly welcomed and encouraged by me.

ENS: Are there any changes you’d like to see in The Episcopal Church’s culture or liturgy to be more inclusive of a Side B-type life?

Hill: I mean, I don’t want anyone in The Episcopal Church to feel threatened by me as if I’m trying to roll back the clock and make gay people go back in the closet or whatever. I would like there to be at least a recognition we actually do have a lot of clergy who may not be gay themselves, but they’re still committed to the traditional view. And we have a number of bishops who are still committed to the traditional view and there are people like me that are trying to live it out as best we can. So I hope there’s at least a space where we can say, “Can we at least have the freedom to follow God the way we think we should?”