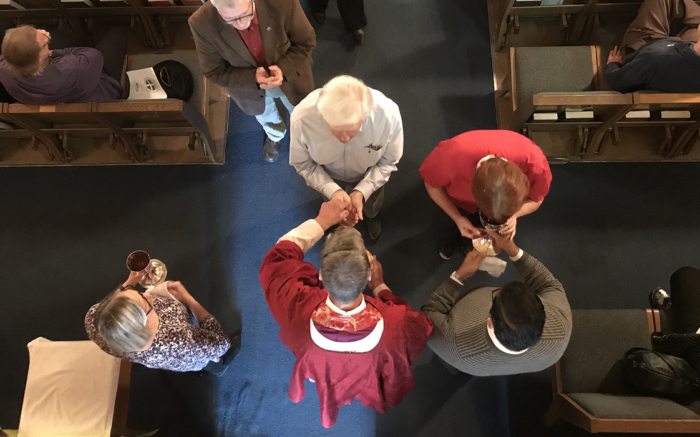 [Episcopal News Service] General Convention’s committees on Prayer Book, Liturgy and Music heard testimony May 3 on a diverse selection of resolutions, from proposals to add the late Bishop Barbara Harris to the church’s calendar of feasts to a measure “addressing antisemitic, anti-Jewish and/or supersessionist interpretations of our lectionaries.”

The resolution that generated the most discussion, and some of the strongest opinions, was a measure proposed by the Diocese of Northern California that would repeal the Episcopal canon that requires worshipers to be baptized before receiving Communion in Episcopal churches.

Martin Heatlie testified on behalf of Episcopalians in Northern California who researched the issue. “We could not find anything in the Bible or the Book of Common Prayer that required baptism as a prerequisite for receiving Communion,” Heatlie said. When priests say “the gifts of God for the people of God” before distributing the bread and wine, that means everyone, the diocese concluded.

“We all believe that all people are God’s people, so it’s not just the gifts of God for just baptized people,” Heatlie said.

Heatlie was one of eight people who testified on Resolution C028 at the online hearing held by the bishops’ and deputies’ committees on Prayer Book, Liturgy and Music. (The two committees, though distinct, typically meet together to consider resolutions.)

The Episcopal Church’s Canon I.17.7 (page 88) states: “No unbaptized person shall be eligible to receive Holy Communion in this Church.”

The Rev. James Richardson, a priest and alternate clergy deputy in the Diocese of Northern California, noted that the diocese’s laity voted overwhelmingly in support of repealing that canon, while clergy approved it by a narrower margin.

“I think that bespeaks that this canon is about control and gatekeeping rather than an invitation to baptism,” Richardson said.

The rest of the testimony on the resolution, however, was opposed to severing the connection between the sacraments of baptism and Communion. Nathan Brown, a lay deputy in the Diocese of Washington, asserted that the two sacraments “are intrinsically linked,” while the Rev. Lee Singleton, a priest in the Diocese of Florida, called the proposal “a bridge too far.”

The Rev. Bertie Pearson, a priest in the Diocese of Texas, said that the lack of examples in the Bible is not itself justification for ending The Episcopal Church’s practice of welcoming only baptized Christians to receive Eucharist.

“I think we sometimes forget that the Bible is not a rule book for how we do church,” Pearson said. In other Christian texts going back to the early centuries of the church, baptism and Communion are clearly linked, he said. “It is always the baptized and the baptized alone who is really emphasized.”

The resolution “contradicts 2,000 years of church teaching and practice,” Kevin Miller, a Massachusetts alternate deputy, testified. “The church universal, which we claim to be a part of, has taught that baptism is the entranceway into the church.”

Miller and others opposed to the resolution underscored that The Episcopal Church can welcome all worshippers while still tying Communion to baptism. It can be an opportunity to teach about the importance of baptism in deepening a person’s Christian faith.

The 80th General Convention will meet July 7-14 in Baltimore, Maryland, to consider these and other resolutions being reviewed by two dozen committees in different focus areas. The triennial convention is both the church’s governing body and the largest churchwide gathering. It typically meets in a different city every three years and is a hub for legislative activity, networking and fellowship. As a bicameral governing body, General Convention splits its authority between the House of Bishops and House of Deputies.

This year’s General Convention was delayed a year because of the pandemic, and when bishops and deputies gather in Baltimore, they will be asked to follow an evolving set of precautions that church leaders are putting in place to minimize the risk of transmitting COVID-19, including vaccination and mask requirements.

This also is the first time that some committee meetings and hearings have been held online months before the in-person gathering, helping the church achieve its goal of reducing the triennial gathering’s duration from 10 to eight days.

Information on proposed resolutions can be found in the online Virtual Binder, and all are invited to register to observe or testify at the remaining online hearings.

Of the 18 resolutions that the Prayer Book, Liturgy and Music committees scheduled for hearings on May 3, 10 recommended creating a churchwide feast day to celebrate the life of Harris, who became the first female bishop in The Episcopal Church and the Anglican Communion when she was consecration as bishop suffragan of the Diocese of Massachusetts in 1989.

Harris died on March 13, 2020. That date would become the day of her feast if it is approved for addition to the calendar.

House of Deputies Vice President Byron Rushing, a deputy from Massachusetts, testified in favor of his diocese’s resolution, emphasizing in particular that General Convention need not wait the customary 50 years after Harris’ death to add her to the calendar.

Harris is remembered for her support of social justice causes and her part in the first wave of women to be ordained as Episcopal priests. Miller, the Massachusetts alternate deputy, praised her in his testimony, saying her service to the church and to the communities it serves justify the feast day.

“I believe that even if she weren’t the first woman consecrated bishop, her Christian witness, her Christian life would be enough for her to be on the calendar,” Miller said.

Others testified in support of Resolution C019, which would create a feast day celebrating the late civil rights icon John Lewis, who was a longtime congressman from Georgia when he died in 2020.

The Rev. Lewis Powell, a deputy and deacon in the Diocese of Northern California, called Lewis an “icon of love, faith, justice, strength, courage, wisdom and a yearning to leave the world and the church a better place than they found it.”

Another resolution, C020, would add renowned theologian Howard Thurman to the church’s calendar of feasts, an addition that Richardson testified was “long, long long overdue.” Though not an Episcopalian, Thurman “crossed so many denominational lines,” Richardson said, adding that Thurman’s book “Jesus and the Disinherited” is commonly read by Episcopal study groups and a central text of The Episcopal Church’s Sacred Ground curriculum on the roots of racism in the United States.

Resolution C018 would begin the process of allowing trial use of what is known as the “Expanded Revised Common Lectionary Daily Readings,” a measure proposed by the Diocese of Virginia. This revised lectionary would, in part, expand the selection of readings for weekday services, creating new opportunities for celebrating Holy Eucharist, Charlotte Meyer testified.

“A lectionary such as this is not only useful but highly effective in forming community,” said Meyer, a lay deputy from the Diocese of Easton.

The resolution addressing antisemitism and anti-Jewish lectionary interpretations, C030, was proposed by the Diocese of New York. It mirrors similar resolutions under consideration by this General Convention and continues the ongoing efforts of The Episcopal Church to respond to concerns that biblical readings, especially during Holy Week, could fuel hatred against Jews.

The committees also heard testimony on Resolution A126, which was proposed by the Presiding Officers’ Working Group on Truth-Telling, Reckoning and Healing. The resolution calls for “a comprehensive review” of the church’s prayer book, hymnal and other liturgical materials “in regard to the colonialist, racist and white supremacist, imperialist and nationalistic language.”

John Wallace, an alternate lay deputy from the Diocese of Pennsylvania, also testified in favor of the resolution. “As we move, in particular, to embrace expansive language more fully in our liturgical life, it’s absolutely critical that we be mindful of the linguistic imagery that we employ and all of the ways that it can be interpreted and misinterpreted,” Wallace said.

The bishops’ and deputies’ committees on Prayer Book, Liturgy and Music will meet next on May 10 to deliberate on the resolutions assigned to them.