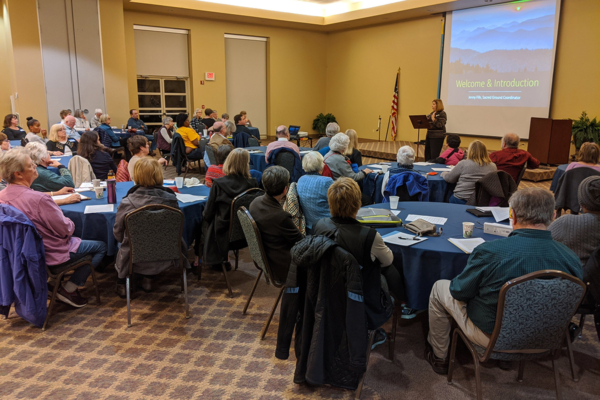 Jenny Fife introduces Sacred Ground to the discussion circle that Fife formed in Roanoke, Virginia, to take up the 10-part, film-based curriculum. The meetings were held at St. John’s Episcopal Church starting in January 2020. The pandemic interrupted the group’s schedule, but future meetings may resume online. Photo courtesy of Jenny Fife

[Episcopal News Service] After more than three years of growth in Sacred Ground, The Episcopal Church’s small group curriculum for exploring the impacts of racism, the team that developed it has released an evaluation of how the program has worked so far. The report also includes updates to the curriculum and offers expanded licensing that allows people outside The Episcopal Church to start their own Sacred Ground “circles,” or small groups.

The program, developed by filmmaker Katrina Browne as part of The Episcopal Church’s Becoming Beloved Community initiative on racial reconciliation, has reached over 20,000 participants so far. The 10-part film- and readings-based discussion series traces the history of systemic racism in America, from its roots to its present realities. From 2019 through 2021, over 2,100 circles were registered in dioceses across the United States.

“Everywhere I travel, people are bursting to tell me about the transformational impact Sacred Ground has had in their lives,” said Presiding Bishop Michael Curry in a press release announcing the report. “The Lord is building Beloved Community through this movement, and in its updated and expanded form, Sacred Ground will help many thousands more take the next steps in the lifelong work of racial healing.”

Among the report’s most significant findings:

Informed by input from the surveys and focus groups, the Sacred Ground organizers added new resources to the program, including a list of best practices for organizing and facilitating Sacred Ground circles. They revised guides for the last sessions in the curriculum that focus on moving from education to action. They added material on the history of Indigenous boarding schools and provided a “Deeper Dive” list of further videos and readings for those who want to learn more about certain topics.

“If you are an organizer or a facilitator, this report will help you to discover what you can do to

create the best outcomes at the internal and external levels,” Browne and the Rev. Stephanie Spellers, the presiding bishop’s canon for evangelism, reconciliation and creation care, wrote in their introduction. “We are humbled and grateful for your feedback about Sacred Ground and its impact, and pray that the report proves beneficial to you and the people you serve.”