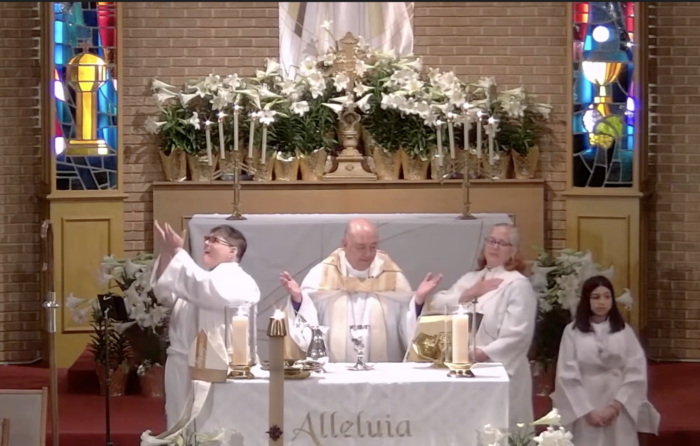 [Episcopal News Service] In the Diocese of Texas, Deaf Missioner Amy Waltz-Reasonover has created a new community by bringing together groups that had never been connected before, introducing Deaf and LGBTQ+ Christians with different forms of communication to Episcopal congregations in the Houston area. What started out as a small online prayer group earlier in the pandemic has grown into an international ministry dedicated to giving Deaf people an accepting place to worship.

With few worshiping options for Deaf people who use American Sign Language, Waltz-Reasonover created the St. Gallaudet Deaf Prayer Group, which holds its own Daily Office services in ASL and English. The group also virtually joins a different congregation one Sunday every month, giving hearing churches a chance to experience Deaf culture and worship styles.

“There’s been this convergence of [different] people ending up in the same spaces and it’s just been really exciting to see where the Holy Spirit is going,” Waltz-Reasonover told Episcopal News Service. “And to know that I get to be a little piece of that, that’s exciting too. But just to see what’s happening for our larger community – it’s almost like The Episcopal Church is getting its Deaf vision back and that’s a great thing to see.”

Raised in a variety of Christian denominations, Waltz-Reasonover happened to learn American Sign Language as a girl, before she started losing her hearing, because her Baptist congregation had a Deaf ministry.

“I was the only kid and I just thought it looked fun and I wanted to do it,” she said.

She became a professional harpist and pianist, playing with symphonies and teaching lessons, but started to lose her hearing in her early twenties due to a genetic condition. Waltz-Reasonover has other Deaf relatives, but they are oral Deaf, meaning they communicate verbally and not through sign language.

She continued her musical career despite her hearing loss and was even able to keep it a secret for years. But about five years ago, she decided she couldn’t continue and sold her harp.

“When I left, I told my conductor, ‘What you don’t know is that I’m virtually Deaf and I have been for a long time,’ and nobody believed me.”

Having grown up with music as her literal first language, “it took me a long time to wrap my brain around [it]; if I’m not a musician, who am I?”

Waltz-Reasonover relied on lip-reading (which she still does when communicating with hearing people) for years, but it wasn’t until the pandemic that she developed an identity as a Deaf person. With everyone wearing masks, she could no longer lip-read and had to use ASL more.

“I basically came out to everybody as a Deaf person,” she said.

She started immersing herself in the tight-knit Deaf community and discovered the Episcopal Conference of the Deaf, a network of Episcopalians that assists in the development of Deaf ministries. Waltz-Reasonover had discovered The Episcopal Church a year and a half earlier, converting from Methodism because The Episcopal Church is LGBTQ-affirming and it offered her more freedom to explore spiritual questions.

Her identity as a Deaf person and as an Episcopalian grew simultaneously, she said, as she attended online ASL worship services hosted by the Episcopal Conference of the Deaf. Discovering that community “saved my life,” she said.

The Episcopal Church has a deep historical connection to Deaf ministry. In 1852, the Rev. Thomas Gallaudet began sign language services at St. Ann’s Church for the Deaf in New York City, possibly the first organized Deaf congregation in the United States, which is still an active congregation.  Other Deaf congregations around the country grew out of the ministry of Gallaudet and St. Ann’s, and The Episcopal Church ordained the first Deaf clergyperson in the United States, the Rev. Henry Winter Syle, in 1876. Today, Gallaudet and Syle are commemorated in the church lectionary calendar on Aug. 27. Gallaudet’s son founded Gallaudet University in Washington, D.C., the first and only institute of higher education for Deaf people in the world.

But with the growing popularity of audism and oralism – methods that discourage sign language in favor of teaching Deaf people to adapt to verbal communication – “Deaf people who worshiped in ASL found themselves on the decline,” Waltz-Reasonover said, “and Deaf folks found themselves in hearing churches and either not enjoying worship or trying their best to be oral but relegated to a substandard hearing person.

“The Episcopal Church lost its vision somewhere along the line,” Waltz-Reasonover said. “And who picked that up is the evangelical churches and the Baptist churches.”

In the Houston area, where Waltz-Reasonover lives, the only Deaf congregations were evangelical or Baptist, and none were LGBTQ-affirming, she said.

“So if you’re a queer Deaf person, you pretty much worship at a hearing church, or you just don’t worship at all,” she told ENS.

Being a queer person in Christian communities has been hard to navigate, she said, but so is being a person who uses both spoken English and ASL in the Deaf community, where people who were not born Deaf are sometimes not fully accepted, she said.

“I straddle both worlds,” she said, “but I’ve found in that a blessing.”

Using what she had learned from the Episcopal Conference of the Deaf, Waltz-Reasonover saw an opportunity to unite Deaf worshipers – who often live in an “insular world” – with the wider church.

“Finding a way to advocate for Deaf churches in a hearing environment takes a Deaf-hearing person,” she said.

Waltz-Reasonover was worshiping with ECD on Sunday mornings, but also wanted to pray Daily Office services like Compline. She started a small virtual ASL prayer group of queer Deaf people, but it expanded rapidly, and she started offering simultaneous English voicing so that Deaf people could worship together with hearing relatives. As the St. Gallaudet Deaf Prayer Group continued to evolve, Waltz-Reasonover consulted with a friend who was then a priest in the Diocese of Texas, who suggested she connect the ministry with hearing parishes in the Houston area, bringing the Deaf worshipers into different congregations virtually.

“I really find a mission in bringing Deaf worship back to this diocese. Can I come and explore what that looks like with your congregation one Sunday a month and show them what Deaf worship looks like and patch my people in online?” she asked rectors around the diocese.

The response was enthusiastically positive on both sides, and attendance “exploded”; many of the Deaf worshipers enjoy the combination of having their own community and being welcomed into a new one every month, Waltz-Reasonover said. Now in the ordination discernment process, she preaches to the whole congregation in ASL with English voicing, with Deaf congregants attending virtually.

Growing by personal recommendations within the Deaf community, the St. Gallaudet Deaf Prayer Group rapidly expanded around the world, with 163 members, about 35 of whom are the core members who regularly attend. Most members are not from the Diocese of Texas, but join from as far away as Thailand, with growing clusters in Africa and California as word spreads. Many are hearing people; some have Deaf relatives, some are priests trying to learn about Deaf worship and some are practicing their ASL or simply enjoy the liveliness of signed worship. Some are not even Episcopalian.

Texas Bishop Andrew Doyle did the English voicing for Compline on Holy Wednesday, “which was super exciting,” Waltz-Reasonover said. “It was a way of our group saying, ‘The church welcomes you, our bishop welcomes you,’ and that was really wonderful for us.”

The next experimental phase of the ministry is one that Waltz-Reasonover is discussing with her local parish, St. Luke the Evangelist in Houston. They are developing a plan to set up the church as a place where Deaf people can come to join worship in person, with ASL interpretation and tablets with live captioning set up in the front rows. In the meantime, though, Waltz-Reasonover and the St. Gallaudet community don’t see online worship as lacking, but a ministry with its own value.

“It’s giving people a place to just be, and to worship and know that they can bring their full selves, and it’s OK if they’re joining us virtually. They’re still joining us. We’re still worshiping together and that’s joyful,” she said.