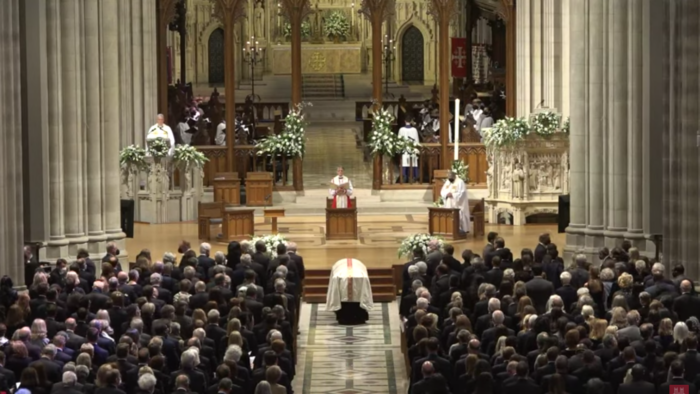 Madeleine Albright’s funeral is held April 27 at Washington National Cathedral, as seen in cathedral video of the service.

[Episcopal News Service] President Joe Biden, as well as former President Bill Clinton and former Secretary of State Hillary Clinton, were among those who paid tribute to Madeleine Albright, the former secretary of state, during her funeral held April 27 at Washington National Cathedral in the nation’s capital.

Albright, who first served in the Clinton administration as U.S. ambassador to the United Nations in the Clinton administration before later becoming the first female secretary of state in 1997, died of cancer on March 23 at age 84. She regularly attended St. John’s Episcopal Church in Washington’s Georgetown neighborhood and was serving on Washington National Cathedral’s governing body at the time of her death.

“She was loved and admired by all who knew her,” Washington National Cathedral Dean Randy Hollerith said in welcoming the funeral’s invitation-only guests. “We say goodbye today to a remarkable human being. Madeleine was a leader, mentor, trailblazer, reconciler and patriot. She was a person of deep faith who always held firm to the highest ideals of her faith and her country.”

Albright joined The Episcopal Church as a young adult when she married Joseph Medill Patterson Albright in 1959. She had been born into a Jewish family in Czechoslovakia in 1937 but said she was never told about her Jewish heritage until a Washington Post reporter uncovered it in 1997.

After concluding her time as secretary of state in 2001, Albright remained active in the church, including by participating in various cathedral events focused on religion and politics. In November 2021, she gave the eulogy there at the funeral of Colin Powell, one of her successors as secretary of state and a fellow Episcopalian.

Biden described how his mention of Albright elicited cheers during his visit to Poland in late March after Russia’s invasion of neighboring Ukraine. “Her name is still synonymous with America as a force for good in the world,” Biden said in his eulogy. “Madeleine never minced words or wasted time when she saw something that needed fixing or someone who needed helping. She just got to work.”

Clinton said he last spoke with Albright two weeks before her death. He asked her how she was feeling as she received treatment for cancer, and she rebuffed the question.

“Let’s don’t waste any time on that,” Clinton recalled her saying. “The only thing that really matters is what kind of world are we going to leave to our grandchildren.”

“I will never forget that conversation as long as I live. It was so perfectly Madeleine,” Clinton said. “The thing that really matters is what’s going to happen to our grandchildren’s generation. … And so, Madeleine made a decision that, with her last breath, she would go out with her boots on, in this case supporting President Biden and all of America’s efforts to help Ukraine.”

A month before her death, Albright wrote an opinion essay for the New York Times. It described Russian President Vladimir Putin’s then-impending attack on Ukraine as a “historic error.”

“Ukraine is entitled to its sovereignty, no matter who its neighbors happen to be,” Albright wrote. “In the modern era, great countries accept that, and so must Mr. Putin. That is the message undergirding recent Western diplomacy. It defines the difference between a world governed by the rule of law and one answerable to no rules at all.”

Former Secretary of State Hillary Clinton filled her eulogy with personal anecdotes of time she spent with Albright before concluding by calling on Americans to follow in Albright’s principled footsteps.

“The Bible tells us that, ‘to everything, there is a season and a time and purpose under heaven, a time to weep and a time to laugh.’” Clinton said, quoting from Ecclesiastes. “If Madeleine were here with us today, she would also remind us this must be a season of action. And yes, once again we must heed the wisdom of her life and the cause of her public service. … Defend democracy at home just as vigorously as we do abroad.”