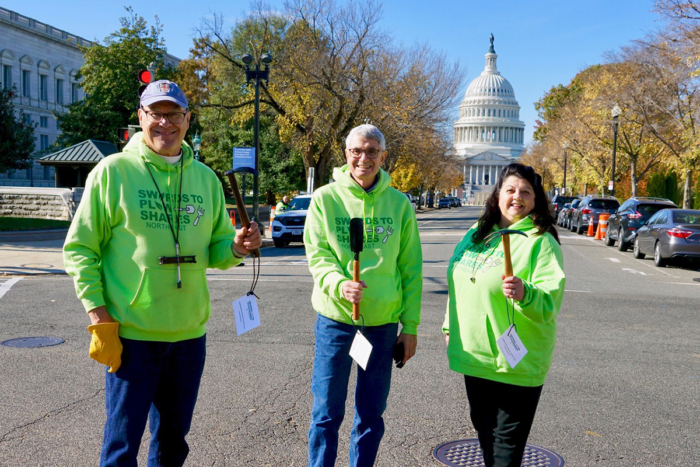 From left, Bishop Jim Curry, Steve Yanovsky and Pina Violano, co-founders of Swords to Plowshares Northeast, hold up some of the garden tools they created from former guns, during a demonstration of the process on Capitol Hill in Washington, D.C. Photo: David Deutsch

[Episcopal News Service] Episcopalians in Connecticut, Ohio and California are helping to launch a national ecumenical initiative called Guns to Gardens that will stage numerous gun buyback events on June 11 and turn the weapons into garden tools.

Retired Connecticut Bishop Suffragan James Curry spearheaded the initiative, which builds on his work with Swords to Plowshares Northeast and similar anti-gun violence blacksmithing ministries. Curry and other organizers hope this inaugural Guns to Garden day will become a catalyst for annual buyback events that draw attention to the problem of gun violence and promote gun safety while supporting families and communities that have been affected by gun-related deaths.

“This is just one strategy, one prong in a multipronged approach toward changing the attitude toward gun violence in our community,” Curry told Episcopal News Service. In a nation where Americans are estimated to own nearly 400 million guns, starting conversations about gun safety is as much the goal as getting guns off the street, he said.

On June 11, Curry will bring his blacksmithing forge to a Guns to Gardens buyback in New Haven. The initiative’s other participants include Church of the Epiphany in Euclid, Ohio, and St. Paul’s Episcopal Church in Oakland, California. They are among the 13 participant sites confirmed as of this week, and Curry said others likely will be added to the official list soon.

The Rev. Rosalind Hughes is leading the effort at Church of the Epiphany, where she serves as rector. The suburban Cleveland congregation will host its gun buyback in the church parking lot from 11 a.m. to 1 p.m., offering gift cards in exchange for the relinquished weapons. Euclid police will be present to help volunteers safely receive the guns, which will be disassembled on the spot. Hughes then plans to begin turning the metal into trowels, using her rudimentary blacksmithing training and a small forge she purchased.

Hughes said her congregation’s lay leaders and members are excited to be a part of the new Guns to Gardens initiative alongside other faith-based organizations across the United States. “The hope is that this will be the first national event and that it will build on itself from here,” she told ENS.

After the buyback, Epiphany is working with the local group God Before Guns to host an interfaith prayer vigil at 2:30 p.m. to lament the problem of gun violence and recommit to ending it. “We have seen firsthand in Euclid the trend in gun violence that’s going the wrong way in the country right now, and so it’s something that’s on people’s minds locally,” Hughes said.

More than 45,000 people in the United States died from gun-related injuries in 2020 – more than any other year on record, according to data tracked by Pew Research Center. More than half of those deaths were from suicide.

Paula Hawthorn, a longtime parishioner at St. Paul’s in Oakland, is a lead organizer of the Guns to Gardens event in the city. She told ENS she first got involved in local efforts to stop gun violence after a series of shootings in 2011 killed three small children. After those tragedies, she said she prayed for guidance and heard God calling on her to do something. “For me, it’s very spiritually directed.”

She first heard about blacksmithing ministries like Curry’s last year and was eager to coordinate a similar gun buyback in Oakland. St. Paul’s is one of numerous sponsors of the June 11 event, which will be held from 10 a.m. to 2 p.m. in the parking lot of another Oakland church, At Thy Word Ministry.

Hawthorn recruited a local blacksmith to handle the shaping of the guns into garden tools. Oakland police, who will be on hand during the buyback, donated 50 previously confiscated guns, which will be converted to tools in advance and distributed at the buyback to the first 50 people who relinquish their guns. All who give up their guns also will receive donated gift cards.

“This is not ‘one and done.’ It is a ministry which we’re hoping will continue,” Hawthorn said. “We’re trying to turn around the attitude toward guns.”

The guns people relinquish in buybacks are just a tiny fraction of the privately owned guns in the United States, Curry acknowledged, but “every gun off the street is one less gun that can harm somebody.” And for gun owners who keep their guns, Curry uses the buybacks to distribute information on safe gun storage, as well as free gun locks and discounted gun safes.

Curry, a founding member of Bishops United Against Gun Violence, started Swords to Plowshares Northeast in 2017. Since then, he has turned more than 800 weapons into garden tools, art, jewelry and other items. The nonprofit’s ministry is deeply rooted in Connecticut, where lawmakers and Episcopal leaders were moved to action on gun reforms by the December 2012 massacre at Sandy Hook Elementary School in Newtown, which left 20 students and six educators dead.

Swords to Plowshares takes its name from a passage from Isaiah 2:4 – “They shall beat their swords into plowshares, and their spears into pruning hooks.” The verse’s prophesy is one of physical transformation, though Curry also sees an opportunity for anti-violence evangelism.

“There’s an invitation in that prophecy to really look at the specificities of violence in our culture and our time in history, and for most of the United States, the focus is gun violence,” he said. 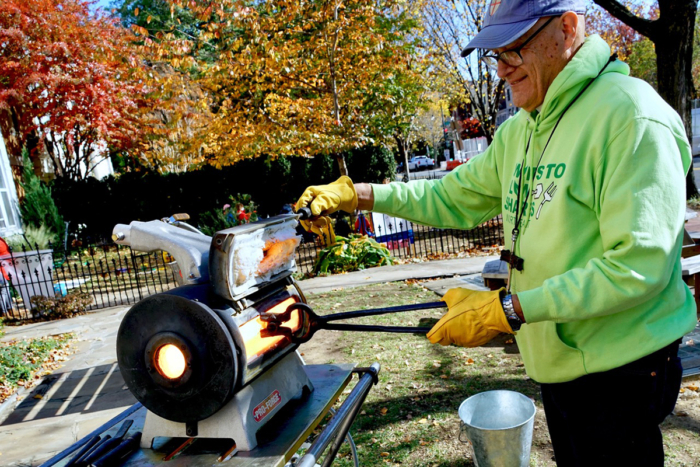 Bishop Jim Curry heats the metal of a former gun in the mobile forge used by the nonprofit Swords to Plowshares Northeast in its demonstrations. Photo: David Deutsch

In November, Swords to Plowshares organized a demonstration on Capitol Hill in Washington, D.C. The Episcopal Church’s gun-safety advocacy in the nation’s capital is led by the Office of Government Relations. It follows Episcopal policy positions established by General Convention in resolutions dating to 1976 that call for legislation to address the problem of gun violence. The office recently has pushed for passage of legislation that would strengthen and expand background checks for gun purchases. The House passed two such bills this year, but they have since stalled in the Senate.

Curry’s nonprofit was inspired by a Mennonite blacksmithing ministry in Colorado called RAWtools, which also is participating in the Guns to Gardens initiative. Curry said he reached out to the leaders of RAWtools with the idea of broadening such efforts to a nationwide campaign, and they helped promote the new initiative to their loosely affiliated network of anti-violence advocates.

June 11 was chosen for the buybacks because the date follows closely after National Gun Violence Awareness Day on June 3. That day initially was created to honor Hadiya Pendleton, a 15-year-old who was shot and killed in Chicago, Illinois, in 2013.

As Guns to Gardens gains momentum, other dates could be added, possibly in December around commemorations of the Sandy Hook massacre, Curry said. This would serve to highlight the range of threats from gun violence that communities face.

“The tears of friends and family are the same, even if the circumstances of the death by gun is different,” he said.