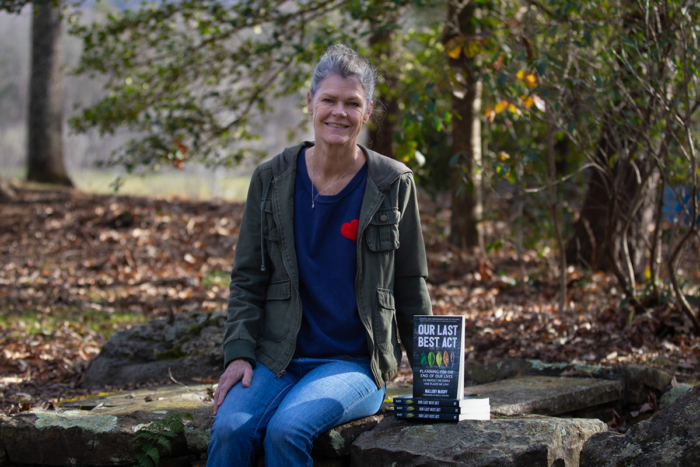 [Episcopal News Service] In 2003, when Mallory McDuff’s 58-year-old mother was killed in a biking accident, the family planned her mother’s burial around the few preferences she had expressed. “My mom wasn’t embalmed, and she didn’t use a vault, and she was buried in the same cemetery as my dad,” McDuff recently told ENS, adding that she was buried in a casket from a funeral home: “She was less of a purist.” Two years later, when her father also died after a biking accident, her shocked family followed his extensive plans for a green burial. It was a relief and would ultimately inform her post-death decisions.

Yet McDuff, a professor of environmental education at Warren Wilson College, planned to be cremated until 15 years later, when a death preparation conference at the Cathedral of All Souls in Asheville, North Carolina, prompted her yearlong exploration of green burial practices, including aquamation, body farming and human composting. The resulting book, “Our Last Best Act: Planning for the End of Our Lives to Protect the People and Places We Love,” published in December, is a guide to earth-friendly options for human bodies after death.

McDuff has also written the books “Sacred Acts” and “Natural Saints.” Her essays have appeared in The New York Times, yes! magazine, The Washington Post.

After interviewing McDuff about this year, ENS recently caught up with her to learn more about “Our Last Best Act” and the insights she’s gained by writing the book.

ENS’ two interviews with McDuff have been condensed and edited into the Q&A below.

ENS: Could you lay out the eco-friendly options for human bodies after death?

McDuff: I volunteered at Carolina Memorial Sanctuary, a conservation burial ground, so that’s green burial, which can also happen at local cemeteries. The second category was aquamation. It’s called alkaline hydrolysis, or water cremation. That’s available in 20 states, and the funeral directors I talked to said that was really going to be the next wave of cremation, because you’re not burning fossil fuels. And then there are body farms, and there are only seven in the country, but if you look online, in 30 seconds you can find out if one’s near you. So those are some of the choices. I also spent time going to home funerals, where the body is kept at home.

ENS: What do you think it takes for the typical person or family to sort through the wealth of after-death options?

McDuff: What happens to a body when somebody dies, the barebones facts are that it’s a lot of logistics. And that’s very hard to deal with when you’re in the moments after someone has died. My father laid out two pages saying exactly what he wanted, and he did that a month after my mom was killed. The gift he gave us, which I couldn’t see at the time, was that we didn’t have to explore all that in a 48-hour time period. My parents were both killed by teen drivers, two years apart. I can’t even describe the total shock of, “Wait, what? This happened again? In the same exact way?” But having his plan gave us the grounding and momentum at the same time.

The other part is, how do you explore the options? I had no idea of some of the options in my region. I thought, “Okay, I’ve got flame cremation, I’m kind of done.” And the reality is that our directives are evolving based on the options available to us, based on us as people, what we need based on the people in our lives who will have to take care of that decision. It’s asking the questions, based on where you are geographically, and that starts with knowing, “Here are some of the options.”

ENS: Desmond Tutu’s death highlighted aquamation. It seems that many environmentally friendly options aren’t widely known or understood. Is that what you’ve found?

McDuff: I think the funeral industry does have some investment in keeping things the way they are. But innovative funeral homes are going to be willing to collaborate with people who want more green options. I’ve witnessed funerals where there’s no funeral home even involved, but I think what will probably happen is more of a hybrid model.

ENS: What did you decide, ultimately?

McDuff: Well, I had to decide, and I did decide, and that’s kind of the tension in the book: “What’s the final decision going to be?” And so I just haven’t told people. Because you have to read the book. So I’m not answering your question intentionally.

ENS: “Our Last Best Act” has been out since December. How have your students reacted to what they’re learning from you about burial options?

McDuff: Most of them had never been to either a conservation burial ground or the cemetery on the Warren Wilson campus–I didn’t know where it was until I started to write this book, and I had been here for 20 years. For the conservation cemetery, a lot of them have this idea, “I just never thought about if there was any relationship between how we treat our bodies at the end of our lives and how we treat the land.” And for the Warren Wilson Cemetery, their reaction is often, “Wow, all the names of the buildings on campus, here are the headstones of people who are buried here.” So [they get] that connection to place and to land, and that they’re a part of something bigger. So it felt profound to me.

ENS: We don’t have great entry points for conversations about death, so what happens when you show up and start talking about your story?

McDuff: The bigger issue to me was not that we’re uncomfortable talking about death, but [that] we don’t have the spaces to talk about it. But we don’t have to wait for anybody to create the spaces for us. For me it was as easy as, “Look, this is what I discovered today,” or, “What’s your plan for your body after you die?” And a lot of people, even people who you’d think would have everything buttoned up and in order, like faith leaders—everybody’s human, and it’s easy to think about the options, and documenting them is a step that some people haven’t taken.

ENS: How did researching and writing “Our Last Best Act,” apart from altering your burial plans, change you?

McDuff: It’s been transformative. It’s an overused word, and it’s not just writing the book, but also writing essays about my parents–it’s changed me in two ways. I’ve realized that simply continuing to write about my parents has been my way of carrying their love in my body, and carrying their stories to my children. The second way that it’s changed me is in opening spaces to talk about death at a very vulnerable time with the pandemic, and now there’s a war unfolding, too. A lot of us have spent these past two years in fear of COVID; there’s no one I know for whom death, or the possibility of death, has not touched them. To have the opportunity to talk about death with people is a real honor. We all can talk about death and this has made me realize it’s not actually that hard.