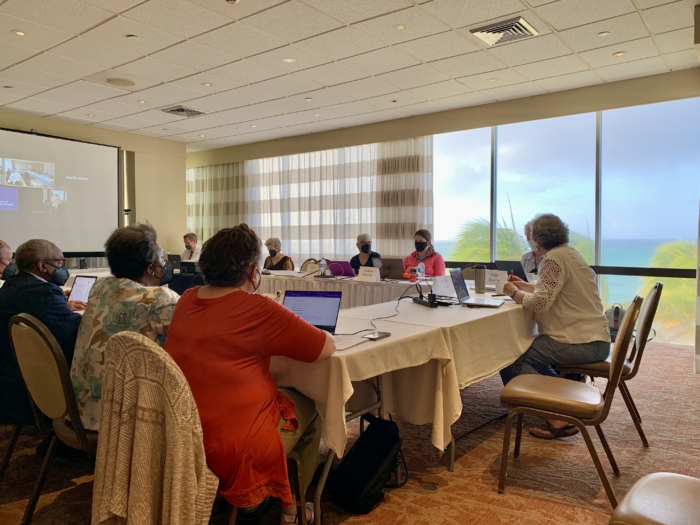 [Episcopal News Service – San Juan, Puerto Rico] The Executive Council of The Episcopal Church closed its last meeting under its current roster on April 23 with a review of the work it has done over the past four years, noting successes, challenges and issues for the next council to address.

Throughout the April 20-23 meeting, members shared their evolving understandings of the council’s mandate to implement the policies of General Convention, which convenes July 7-14 in Baltimore, Maryland, where new members will be elected.

The current council’s term was dominated by a series of crises – the COVID-19 pandemic, political chaos in the United States, the racial justice reckoning after the murder of George Floyd. Each term is normally a triennium, but because General Convention was delayed a year, this one was technically a quadrennium – or, as it was described during a committee meeting, a “pandemium.”

“These have not been easy years for anybody,” Presiding Bishop Michael Curry said before adjourning the meeting. “We have worked faithfully, made hard decisions; every once in a while we bump heads, but we’ve done so with grace. We’ve worked through our problems. We figured out solutions, we figured out a way forward, and it has been an honor and a blessing to be a part of this Executive Council.” 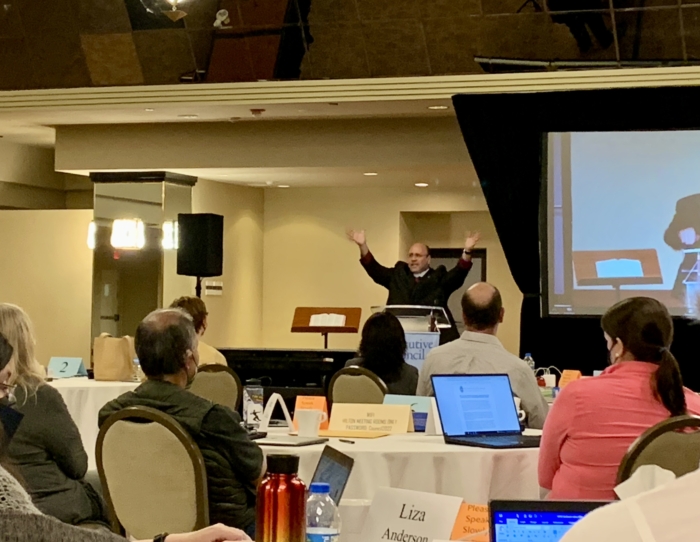 Council met in San Juan, Puerto Rico, where they were welcomed by Puerto Rico Bishop Rafael Morales Maldonado. Morales spotlighted the array of diocesan ministries operating across the island, within and beyond the church, including a hospital and home health care network, a radio station, schools and a seminary. 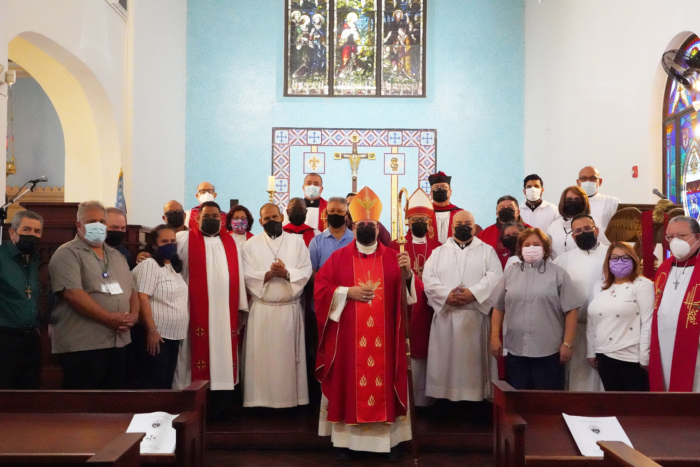 Puerto Rico Bishop Rafael Morales and seminarians at a Eucharist for the beginning of classes at the Episcopal Cathedral of St. John the Baptist in San Juan, Puerto Rico, in August 2021. Photo: Diocese of Puerto Rico

He also noted 2022 is the 150th anniversary of the arrival of Anglicanism on the island. The Spanish government, he said, allowed the construction of the first Protestant church in Puerto Rico on the conditions that it could not open the front door, conduct Spanish services or ring the bell, so as not to attract new worshipers. In 1898, when American troops invaded the island, they opened the church and rang the bell, which is still referred to as the “freedom bell” or “religious liberty bell,” Morales said.

Council heard a presentation from Víctor Feliberty Ruberté – a professor and member of the Historical Society of The Episcopal Church – on how over 500 years of colonialist rule by the U.S. and Spain continues to affect Puerto Rico. The U.S. Constitution, he explained, is not applied fully in the territory, and though Puerto Ricans are American citizens, they have no vote in Congress and cannot vote in presidential elections. Religious denominations, he added, have been instruments of colonial rule in various ways, as is the case throughout much of the Anglican Communion.

“Both the religions and languages of those different countries today are the result of that reality and how it evolved,” he said.

Among the resolutions passed on the meeting’s final day was a recommendation for the next council, “under the guidance of the Diocese of Puerto Rico, to uncover, wrestle with and seek healing from the sins of colonialism in connection with our broader work in dismantling systemic racism.”

As part of that broader work, council also passed several resolutions resulting from the work of the Ad Hoc Committee on Indigenous Boarding Schools on assessing and responding to the church’s historical involvement with boarding schools that separated Native American children from their families and culture. One resolution directs the continuation of this work under a new Executive Council committee, which would gather information and stories about the church’s involvement with boarding schools into a compendium that would be shared with the church and housed at the archives in Austin, Texas.

Council also approved a resolution that will be submitted to General Convention; if approved, it would create a task force to document and develop culturally appropriate liturgical materials that reflect Native spirituality, for exclusive use within Native communities. The proposal was developed based on the input of Native leaders in the church and the Presiding Officers’ Working Group on Truth-Telling, Reckoning, and Healing.

On the recommendation of the Rev. Bradley Hauff, the presiding bishop’s missioner for Indigenous ministries, council passed a resolution approving a memorandum of understanding between Hauff’s office and Bexley Seabury Seminary to create a joint theological education program for Native clergy and laypeople. Traditional seminary programs – especially residency programs that require students to leave their communities for several years – are a barrier to many Native Episcopalians who want serve in church leadership roles. The program “will develop the necessary creative and culturally responsive leadership development and education that our Indigenous communities have been calling for,” said Julia Ayala Harris, chair of the Committee on Mission Within The Episcopal Church.

Council also signed a memorandum of understanding with the Church Pension Fund, the sponsor and administrator of pension and other benefit plans for The Episcopal Church. A task force created by the 79th General Convention in 2018 to make recommendations for “improving, clarifying, or effecting changes in the relationship” between CPF and The Episcopal Church met multiple times with members of the CPF Board of Trustees to develop the agreement. It specifies that members of Executive Council and the CPF Board of Trustees will hold at least four consultations between the 80th General Convention and the 81st in 2024.

“The Executive Council and the CPF Board of Trustees will share information, insights, and ideas to help each organization plan for the future and address their respective policy concerns posed by changing demographics, changing expectations of and for clergy and current and retired lay employees within [The Episcopal Church], and changing understandings of the church in society,” the agreement read.

Several council members raised concerns about the safety of this summer’s General Convention, given the continued emergence of COVID-19 variants, the large numbers of people attending, the danger of long COVID and the increased risk for older people and those with underlying health conditions. The Rev. Gay Clark Jennings, president of the House of Deputies, requested the ability to contract with a public health expert to advise her on policies and procedures for General Convention approaches, and council approved a resolution allocating up to $50,000 of the 2022 budget’s surplus for that purpose.

In her closing remarks, Jennings recalled that in the opening remarks of the current council’s first meeting in 2018, she mentioned that she enjoys disaster movies.

“I didn’t know that soon we were going to live in a disaster movie,” she told council. “But it is in disasters where we find out whether or not our community is cohesive. We find out whether our community cares for those who are most vulnerable. It’s during disasters when we find out really what our values are, and what we’re made of … and this council has done that in extraordinary measure with each other, with our church and for the most vulnerable, both within our church and beyond.”