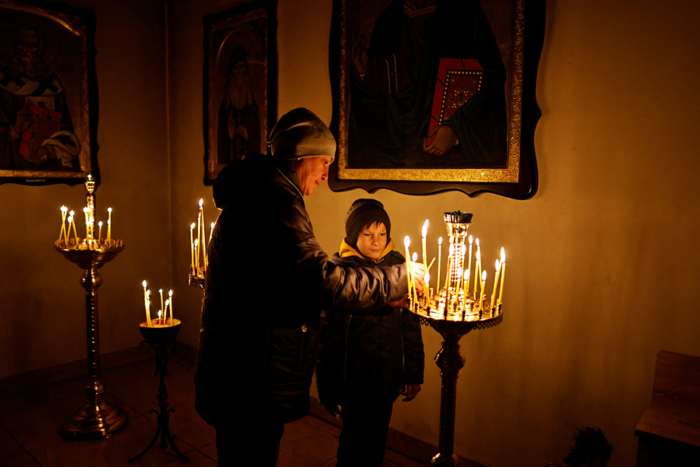 A woman lights a candle during the Palm Sunday mass at the Church of St. Andrew and Pyervozvannoho All Saints, amid Russia’s invasion of Ukraine, in Bucha on April 17. Photo: Reuters

[Episcopal News Service] As Russia ramps up the latest phase of its attack on Ukraine nearly two months into the unprovoked war, Episcopal congregations are showing their support for Ukraine in a variety of ways, from making Ukrainian-style Easter eggs known as pysanky to raising money for Episcopal Relief & Development and other agencies responding to the crisis.

Numerous congregations have hosted prayer services and vigils in recent weeks. On April 3, Trinity Episcopal Church in Grand Ledge, Michigan, hosted a vigil “for peace and for the safety and well-being of the people of Ukraine.” Dozens of people attended. St. Matthew’s Episcopal Church in Wheeling, West Virginia, presented “A Concert for Ukraine” on April 5.

Also in West Virginia, Christ Episcopal Church in Bluefield organized an interfaith vigil March 27 in a downtown square for the people of Ukraine. “The scope of the tragedy is almost unbelievable,” the Rev. Lou Hays said in an interview with WVNS-TV.

Trinity Episcopal Cathedral in Little Rock, Arkansas, held a special 20-minute bell ringing on April 10 to show solidarity with Ukraine. “I think everybody realizes what a terrible thing is happening there and we all want to do something, but as everyday people we don’t know what to do,” Julie Keller of the cathedral’s Bell Ringing Society told KTHV-TV.

“We need to raise our voices individually and collectively,” he said, “for humanitarian assistance, for wise military and diplomatic policies, for the support of the United Nations and, above all, we need to pray for the welfare, well-being and the souls of those in the direct line of conflict in Ukraine.”

The Episcopal Church has been vocal in its calls for peace and its prayers for the Ukrainian people since the run-up to Russia’s war against the country, which it invaded on Feb 24.

On Jan. 26, Executive Council passed a resolution that expressed “grave concerns about the escalation of tensions and military buildup along the border of Russia and Ukraine.” The House of Bishops issued a statement on March 21 condemning Russia’s aggression against its neighbor, “an independent, sovereign nation that has posed no threat to others beyond its borders.”

And Presiding Bishop Michael Curry joined other presiding bishops and archbishops of the Anglican Communion’s provinces in a March 31 statement that expressed alarm at the escalating humanitarian crisis caused by Russia. “We call for an immediate ceasefire and the withdrawal of Russian troops from Ukraine,” the archbishops and presiding bishops said in the statement from their Primates’ Meeting.

Some Episcopal congregations and Episcopalians are reaching out to local Ukrainian communities. When St. Stephen’s Episcopal Church in New Hartford, New York, held a prayer service on April 7 for the people of Ukraine, participants included the Rev. Michael Bundz of St. Volodymyr Great Ukrainian Church in Utica.

The Diocese of Northern Michigan’s Canterbury House ministry at Michigan Technological University in Houghton has connected with and offered support to Ukrainian students, some of whom have joined campus protests against Russia’s war.

In the Diocese of Los Angeles, the simple act of hanging the blue and yellow Ukrainian colors outside St. James Episcopal Church in Newport Beach elicited an emotional response from a Ukrainian woman now living in Southern California.

“That touched me so deeply,” Lidiia Zamaraieva told the Los Angeles Times. “I want to come and say thanks to the people of the church for supporting Ukraine even though they don’t know Ukrainians.”

Lidiia Zamaraieva is focusing her efforts on war relief efforts in her native country. When she saw a Newport Beach church @StJamesNewport flying a banner with the words “Pray for Ukraine,” she brought the congregation a cake. https://t.co/mMP74wvTfZ

Other congregations are finding creative ways of showing support. On March 25, St. Thomas Episcopal Church in College Station, Texas, held a “Yoga for Peace” event filled with prayers for Ukrainian victims, with participants encouraged to donate to an organization called World Central Kitchen and its Chefs for Ukraine campaign.

Elementary school students Esmee and Michael Pritchard, a sister-brother team from Calvary Episcopal Church in Williamsville, New York, set up a stand at the church to sell flags, bracelets and other Ukraine-themed items and raised more than $200 to donate to relief efforts.

Other congregations and dioceses have launched their own fundraising campaigns and donation drives. The Diocese of the Central Gulf Coast collected more than $30,000 from church members to give to Blessings International, which is coordinating medicine and medical supplies for Ukrainian families.

St. Elizabeth’s Church in Ridgewood, New Jersey, found success in collecting supplies to help Ukrainians displaced by the war. “It’s incredible how generous and how kind and big-hearted people are,” Lyubov Ferara, a Ukrainian-born St. Elizabeth’s parishioner, said in a diocesan article. She has extended family still in Ukraine. “I cannot put in words the gratitude we have.”

One of the easiest and most effective ways for Episcopalians to help is by contributing to Episcopal Relief & Development’s Ukraine response. The agency is coordinating with the Convocation of Episcopal Churches in Europe and ecumenical partners in the region, including the Anglican Alliance.

“We are extremely grateful to all of our generous donors and supporters who are enabling us to provide assistance through our partners,” Abagail Nelson, executive vice president of Episcopal Relief & Development, said in a news release. Financial contributions will be used to “equip our local partners to get the specific emergency supplies they need, from local and regional sources, which will support the local economy.”