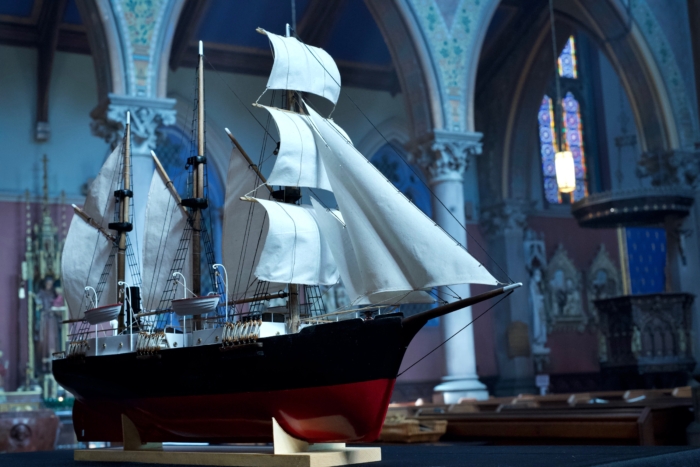 The votive ship on display before it was hoisted up to the rafters of St. Paul’s Episcopal Church in Carroll Gardens, Brooklyn, New York. Photo: Nathan Taylor

[Episcopal News Service – New York] A Brooklyn church is expressing thanks for enduring the COVID-19 pandemic by resurrecting an old tradition: building an intricate model ship to hang from its rafters. And in a poetic stroke of fate, the real ship it was modeled after – from Antarctic explorer Ernest Shackleton’s ill-fated 1914-1916 voyage – was just found after being lost for 106 years.

The new votive ship at St. Paul’s Episcopal Church in Brooklyn’s Carroll Gardens neighborhood was commissioned by the Very Rev. William Ogburn, rector, months before the discovery of the Endurance on March 5. It now joins another votive ship first hung in the church after World War I in thanksgiving for the safe return of young men from the parish.

The tradition of the votive ship goes back to 15th-century Europe, as sailing was becoming a primary instrument of political and economic power. Seamen and their families started building or commissioning model ships to adorn their churches, either before a voyage as an offering for protection or in thanksgiving for a safe return home from a particularly dangerous journey. They became fixtures of churches in coastal Europe, but the practice never really made it to the United States.

Many young men from the parish served in World War I and saw votive ships for the first time in French churches, Ogburn said, bringing the tradition with them when they returned to St. Paul’s. After the war, as many as 12 model ships were given to the church and hung from the rafters until 1978, when someone broke into the church and stole all but one. The three-masted ship with the green and white hull had fallen to the floor and broken during the robbery and was left behind. 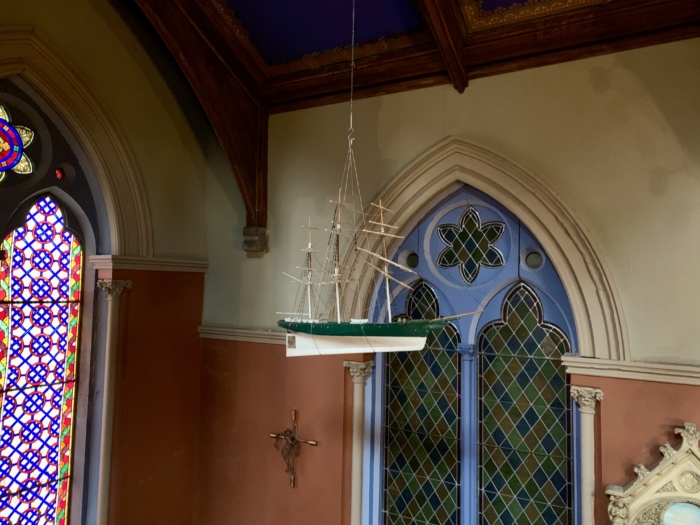 The ship had been donated by three parish mothers whose sons had survived the torpedoing of the USS President Lincoln in 1918; despite its delicate appearance, it had previously been a toy that the boys would “sail” in the lake in nearby Prospect Park, Ogburn said. The previous rector, the Rev. Peter Cullen, had it restored and re-hung about 10 years ago.

Ogburn took over as rector of the neo-Gothic Anglo-Catholic church about two weeks before the start of the COVID-19 pandemic, which was killing about 700 New York City residents per day by mid-April 2020. He had never heard of votive ships before, and has since been able to find only three others in the U.S.

Last summer, as New York emerged from the worst phase of the pandemic, Ogburn started thinking about how to memorialize those who died. There are already various memorials around the church, including plaques in honor of those who died in wars and the 9/11 attacks.

“This place is riddled with plaques,” Ogburn told ENS. “The last thing we need is another plaque on the wall.”

Looking at the World War I votive ship, with its symbol of hope amid the ordeal of war, “I thought, ‘What if we commissioned a new votive ship in thanksgiving to God for having come through this great ordeal, which has been COVID?’” 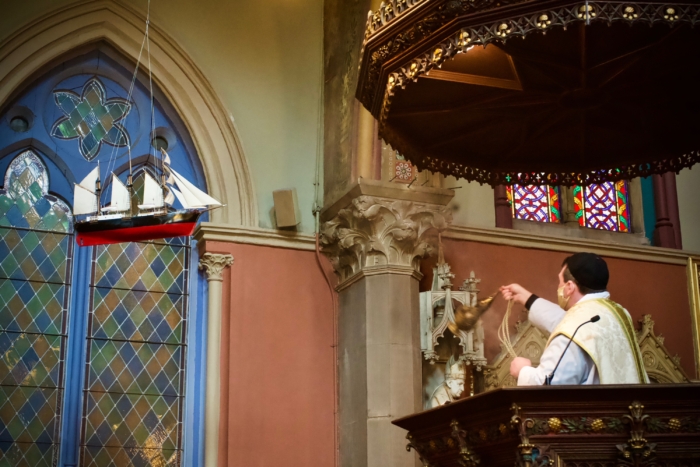 Ogburn asked parishioner Michael Miller – who uses a workshop in the church basement for woodworking projects in exchange for doing some maintenance work – to build the ship. Since it was going to be built entirely by hand, not from a kit, they had to decide what kind of ship it would be. Another parishioner suggested they model it after the Irish-English explorer Ernest Shackleton’s ship, the aptly named Endurance.

The voyage of the Endurance is one of the most legendary tales of heroic leadership and survival against overwhelming odds. Shackleton and 27 other men set out on the Endurance in 1914, intending to complete the first land crossing of Antarctica. The ship became trapped in sea ice and sank, and the team drifted on ice for months before sailing lifeboats to an uninhabited island. Shackleton and five others then sailed one of the lifeboats 800 miles to a whaling station and organized a rescue operation to save the other men, all of whom had survived, a year and a half after the Endurance had gotten stuck.

The Endurance seemed the perfect ship to model the votive ship after, Miller and Ogburn thought, because it represented perseverance through great hardship, right down to its very name. The votive ship was not meant to be an exact replica of the Endurance, but an example of the type of ship the Endurance was: a barquentine schooner. But Miller did incorporate one specific detail he encountered in his research. The Endurance also carried dozens of sled dogs and a pet cat named Mrs. Chippy. Miller included a tiny dog and cat on the deck in their honor. 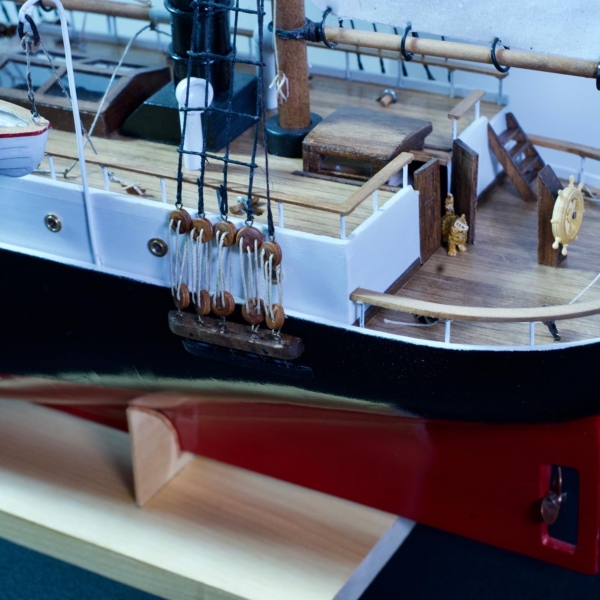 “He told me it’s the hardest thing he’s ever done,” Ogburn said, “but he’s very talented.”

None of that detail can be seen now, though. The ship hangs high above one of the nave’s side aisles with its bow pointing toward the altar, as was the custom for votive ships. Ogburn decided to hang it in the same spot where one of the World War I ships was hanging in an old photo; when he shone a flashlight up into the rafters, the hook was still there. 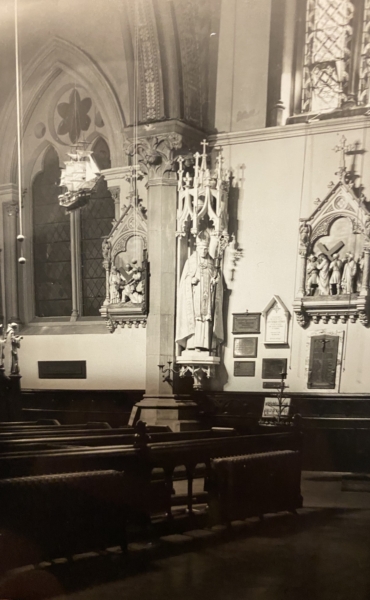 A votive ship can be seen in this early 20th century photo, hanging in the same spot where the new one is now. Photo: St. Paul’s Episcopal Church

The ship was blessed and dedicated in November, and some of the parishioners put together a small display about the Endurance and the tradition of votive ships in Europe and at St. Paul’s. At the time, the fate of the Endurance itself had remained unknown ever since it was swallowed up by the sea ice in 1915, despite many searches for the wreck.

But just a few months later, on March 5, it was found by the search expedition Endurance22. Lying nearly 10,000 feet under the Weddell Sea, the ship was remarkably intact, having been preserved by the frigid waters.

For Ogburn, the discovery of the Endurance – which held together even after being crushed by ice and spending 106 years on the seabed – magnifies the timely meaning of the votive ship.

“We thought the idea of endurance was appropriate – that they had such an ordeal and no one died. Obviously you can’t say that for COVID,” he told ENS. “[But] it’s been an amazing project and a fun thing that everyone seems to love and enjoy.”