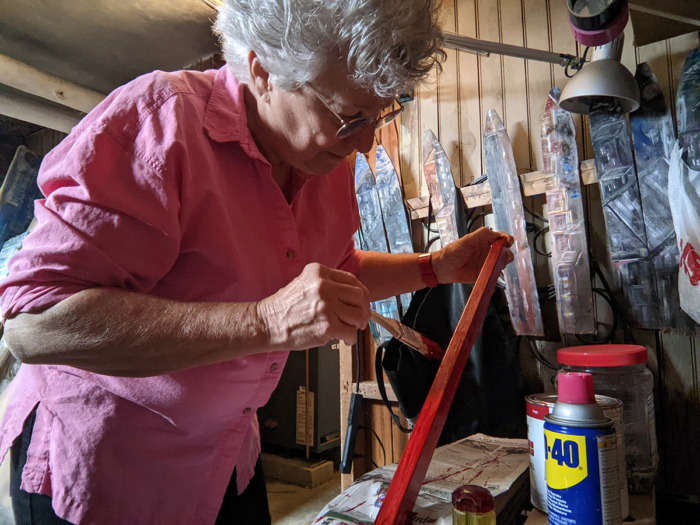 [Episcopal News Service] A front lawn filled with tall, tombstone-like objects covered in plastic greeted parishioners arriving at St. James Episcopal Church after their traditional Palm Sunday procession behind a donkey through Upper Montclair, New Jersey. After the morning’s worship service, they emerged from the church to find the plastic removed and another journey unveiled before them: a series of doors decorated to represent the Stations of the Cross.

Walking the traditional 14 stations tracing Jesus’ final steps from arrest through burial is a Holy Week devotion for many Christians. This year, St. James’s rector, the Rev. Melissa Hall, invited 14 volunteers to engage in a Lenten devotion of creating their own stations on doors as a holy art installation for the community – “create something that someone who has no orientation to religious life can walk in and take a look at these doors and understand the humanity of what happened to all of us on Good Friday.” 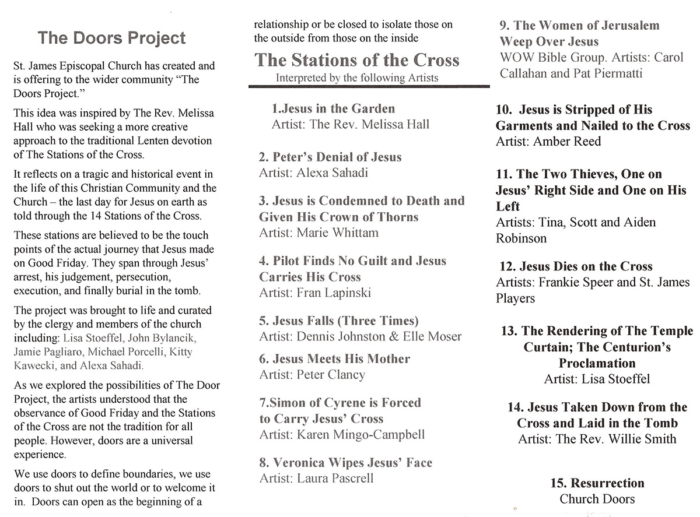 The Doors Project adapts and expands the traditional 14 stations to tell the story of the Passion beginning with Jesus in the Garden of Gethsemane and including additional details, such as Peter’s denial of Jesus and the splitting of the curtain in the Jerusalem temple, as well as combining Jesus’ three falls into one station. A brochure lists the artists and their stations. Each door includes a placard with the station’s title, Scripture reference, an artist’s statement and a QR code for video of the artist. No one is required to enter the church, but the church’s entrance represents a 15th station: Resurrection. The doors will remain in the churchyard until April 24.

Doors themselves are a universal experience, the brochure explains. “We use doors to define boundaries, we use doors to shut out the world or to welcome it in. Doors can open as the beginning of a relationship or be closed to isolate those on the outside from those on the inside.”

Hall instructed the artists to interpret their assigned stations according to their experiences, then translate that into art.

“Speak to the atheist,” she said. “Speak in a way that they will understand that this stone [church] edifice that we live in is not a stone fortress but a place where people like themselves live. We worry about life and we worry about other people the same way that they do. Because we are religious people does not mean that we are not human.

“That’s what Good Friday is. It’s the human experience,” she said. “Are we trying to win them over? No. We’re not trying to proselytize. It’s about talking about the common experience, the humanness, and that whatever you believe in … we’re called together by something greater.” 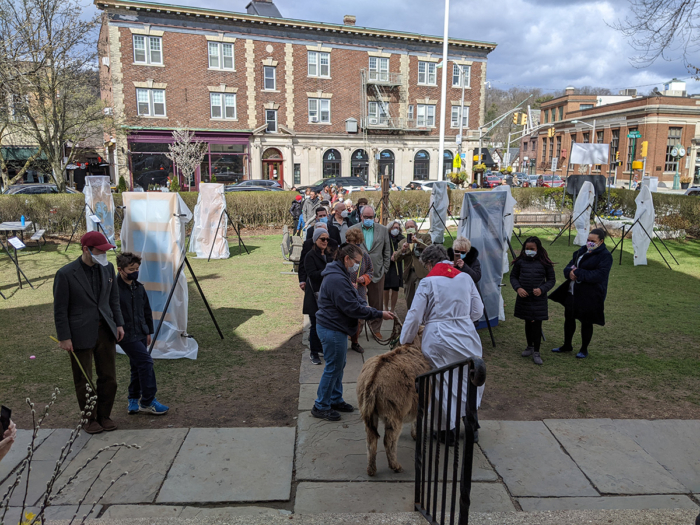 That common experience was death for Frankie Spear, who created Station 12 (Jesus Dies on the Cross) on behalf of the church’s theater group, The St. James Players.

“Death is a hole,” she said. “I thought about people I have lost. I thought about what it must have been like for that mother to watch her son die … and what it was like for him knowing this was happening, and it just feels like a hole.”

So she created an “everyman” figure with a hole through the heart to stand behind her door. “Regardless of what your spiritual ideology is, we all as humans have had the experience of loss … So I really hope that that allows people to connect, whatever their faith is.”

Marie Whittam painted the crown of thorns starfish devouring coral as she reflected on impending destruction and the choices we make in her interpretation of Station 3 (Jesus is Condemned to Death and Given His Crown of Thorns) for the Doors Project at St. James Episcopal Church in Upper Montclair, New Jersey. Photo: Pat Piermatti

As someone interested in environmental conservation, Marie Whittam was drawn to Station 3 (Jesus is Condemned to Death and Given His Crown of Thorns).

“There is a starfish called the crown of thorns in the Pacific Ocean. When nature is in balance, it preys on the baby starfish that are actually called the disciples,” explained Whittam, administrative assistant at the church preschool. “When nature’s in balance, the disciples eat the coral. But because they’re preyed on, they do minimal damage.  … Things are out of balance now, so the crown of thorns themselves are eating the coral. All of the coral is being destroyed.”

She relates this to Jesus receiving the crown of thorns, “aware that he was facing this destruction  … but he refused to do anything to stop it.”

“That was just so powerful to me. We could stop the destruction, but we’re choosing not to. There are now people that are going out and collecting the crown of thorns starfish in an attempt to save the coral. It’s been let go for such a long time, I don’t know if it will succeed.”

Contemplating Station 13 (The Rending of the Temple Curtain; The Centurion’s Proclamation), Lisa Stoeffel sought a metaphor for the world-shattering experience of the curtain in the temple, where the Jews believed God lived, tearing in two at Jesus’ death.

“We’ve had so much social injustice, war, pandemic,” she said. “The world is split, but divine love is going to help mend it.

“I have a tree going through the middle of the split world, and underneath the world, much like Atlas, is a man who is supporting the world, representing mankind trying to hold the world together. Behind him are roots of the tree, and the Creation Tree is going up behind the man … into the heavens, blossoming into white petals of pure joy. This tree represents: Through divine love, the creation of a new and better world.”

Stoeffel is a professional artist, but many of the creators were not. “Most of them have never done anything like this before,” Hall said.

Poet Laura Pascrell wrote a poem that she incorporated into the door for her station, Veronica Wipes Jesus’ Face, that begins: “I heard the crack of a door. It was opening directly into my heart.”

Veronica “chose to be kind when no one else was, when people were afraid to,” Pascrell said. She painted the door’s window panels blue, reflecting emotion, the saltiness of sweat and “the different depths and levels we continue to open up when we offer compassion.” She incorporated keyholes and keys, representing the doors people open within themselves when they risk being compassionate and brave. And she used mirrored Mylar.

“I wanted there to be a reflective element because it’s partially about being seen,” she said. “When you are showing love and compassion, you are being seen by what’s true. For me, that would be what is Godlike.” 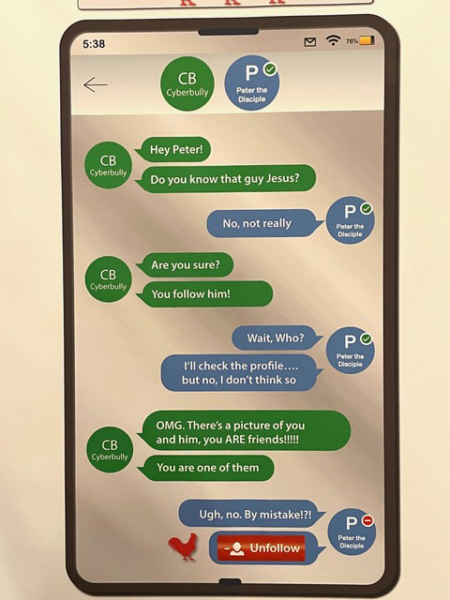 “So many times, now, we live in a virtual world where people friend and unfriend or follow and unfollow people so easily,” she said. She imagined the biblical “servant” as a cyberbully and created the image of an iPhone conversation with Peter questioning his connection to Jesus. She thought people could relate to how they feel “when they’re unfollowed or unfriended or un-liked or bullied.”

Many participants decorated both sides of their doors.

Painter Carol Callahan and photographer Pat Piermatti collaborated on Station 9 (The Women of Jerusalem Weep Over Jesus) with input from their women’s Bible study, Women of Wisdom. The front of the door displays photographs of women weeping in distress, including a photo Piermatti took of the corresponding station in San Giovanni Rotondo, Italy. “Weeping uncovers our powerlessness,” the artists’ statement notes.

The back of the door features the more powerful Women of Wisdom, including photos depicting or contributed by the Bible study members. A photograph of Callahan’s painting “Sunrise at Bay Head Beach” is at the top, flanked by pictures of owls, a symbol of wisdom.

Fran Lapinski’s door brings visitors on a walk through history in her interpretation of Station 4 (Pilate Finds No Guilt and Jesus Carries His Cross). Pilate basically says, “Take him yourself,” as the crowd screams, “Crucify him,” she said. “It just resonates with me because we have said that as a people time after time after time during the centuries.”

This is the station “that makes me the angriest,” she said. “It just makes me weep every time this innocent man is threatened by this mob, and everybody folds.”

She painted the cross of wood between the windowpanes black, hung a desert-like fabric and attached a series of photographs of mob actions: Auschwitz, children being taken to a Japanese internment camp, the fence where Matthew Shepard died, the George Floyd memorial, the “Unite the Right” rally.

On the back, painted “sanctuary red,” she hung a curtain of shredded fabrics, including a kente print based on a traditional Ghanian textile pattern, Hebrew symbols, pride colors and a serape. Peeling stickers proclaim: Black Lives Matter; Stop Asian Hate; Equality; Coexist.

“I invite you into my kitchen, where all things get resolved,” she said. She sees the weariness and unraveling of the items “as we make these mistakes over and over again.

“We have to do something different,” she said. 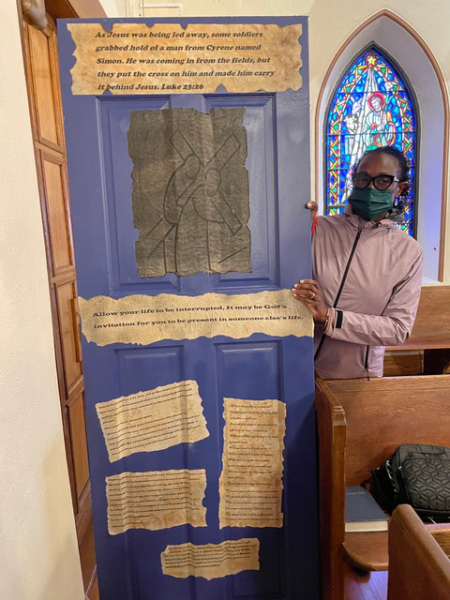 Karen Mingo-Campbell prepares to bring Station 7 (Simon of Cyrene is Forced to Carry Jesus’ Cross) outside for installation outside St. James Episcopal Church in Upper Montclair, New Jersey. Through her art, she reflected on those who, willingly or unwillingly, enter into service that changes history. Photo: Pat Piermatti

Karen Mingo-Campbell also contemplated history in creating Station 7 (Simon of Cyrene is Forced to Carry Jesus’ Cross). “I thought about people who either willingly or forcibly were made to ‘help’ that resulted in a difference in the world.”

She used the color indigo because it comes from indigo plants, “which the enslaved people from Africa were forced to farm here in America … That opened the door for commerce in the world.”

She included Thurgood Marshall, first bBack Supreme Court justice; Bianca Tylek, who sheds light on the prison-industrial complex; and the teen who recorded George Floyd’s murder. “She was an ordinary girl, just walking by, much like Simon of Cyrene. Through her courage, she was forced to bear witness to a horrific incident. And because of the work she did in doing that, it changed the United States.”

She painted the back side in bright primary colors, incorporating hearts and a mirror with the letter “I” inside and the message: “I can do all things through Christ who strengthens me.”

“I wanted to reflect hope,” she said.

Mingo-Campbell admitted feeling nervous when she began the project. “I’ve never done any such thing before. I prayed and thought about it a lot.”

Creating the doors was more than an art project or a biblical analysis.

“It went from Scripture to feeling for almost everybody,” Lapinski said.

“The whole process was so incredibly overwhelming and spiritual,” Speer said. “There was a lot of prayer. I should have put on the material list: plywood, paint, epoxy, prayer. That’s what those are made of. All the pieces are so incredible. I hope people can feel a connection and some common ground.”

-The Rev. Sharon Sheridan Hausman is a freelance writer and a priest in the Diocese of Newark