[Religion News Service] A group of prominent faith leaders gathered in Chernivtsi, Ukraine, on April 12 to denounce violence and express solidarity with Ukrainians amid Russia’s ongoing invasion of the country.

At the meeting near the Romanian border were former Archbishop of Canterbury Rowan Williams and Rabbi Jonathan Wittenberg, president of the Council of Christians and Jews, as well as Buddhist, Muslim, Hindu and other Christian and Jewish leaders. Pope Francis sent a letter written for the event.

“The present moment leaves us deeply troubled, because it is marked by the forces of evil,” Francis wrote. “All this troubles our consciences and obliges us not to keep silent, not to remain indifferent before the violence of Cain and the cry of Abel, but instead to speak out forcefully in order to demand, in the name of God, the end of these abominable actions.”

The speakers for the most part avoided discussing specific political dynamics of the war but focused on compassion and empathy for those suffering as a result of it.

“We’re not here to speak politics,” said Rabbi Alon Goshen-Gottstein, who directs the Jerusalem-based Elijah Interfaith Institute that organized the event. “We’re not here to make peace. We’re here to be with you.”

In a separate phone interview with Religion News Service after the event, Goshen-Gottstein explained the gathering was meant to offer a religious response.

“This isn’t a peace delegation, and it isn’t a summit attempt to move the political process,” he said while waiting to cross Ukraine’s border. “It’s a spiritual, pastoral and inspirational moment. As some people said: ‘For a change, we weren’t thinking about the war. For a change, our minds and hearts were uplifted.’” 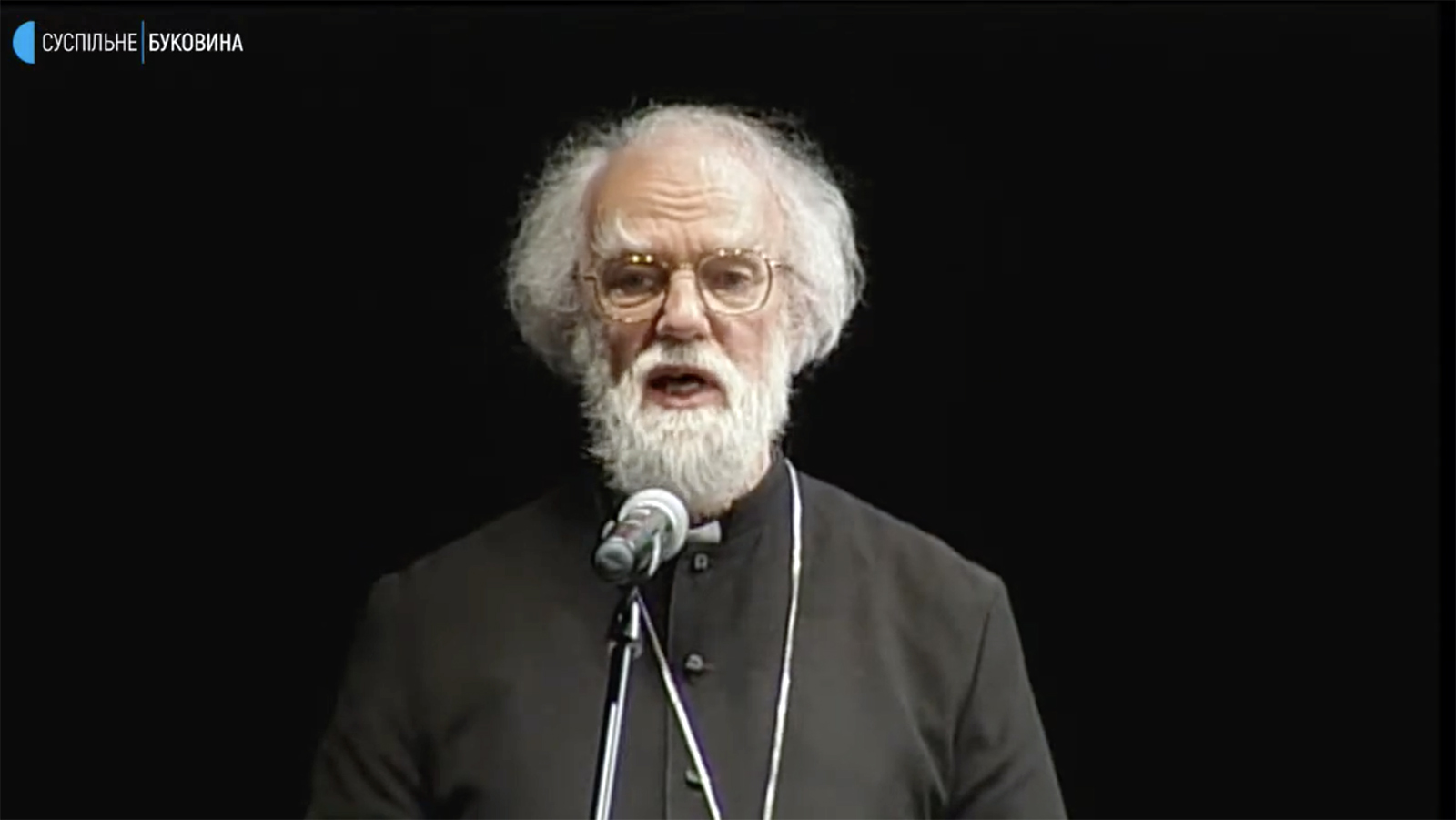 However, Goshen-Gottstein acknowledged event speakers did engage with political dynamics, albeit often in general terms. During the event, he described Francis’ message as the “strongest statement by the pope to date” regarding the war and voiced appreciation for faith leaders’ willingness to speak out.

Asked to respond to Francis’ message during the gathering, Williams said he was struck by what the pope “has to say about violence and war, as a sign not of strength, but of weakness. A sign of fear, and of failure. A fear of the truth, and a failure to be human.”

Williams also offered his own thoughts on the conflict, at one point calling for a cease-fire during a prayer.

“Our fellowship here today may not change the circumstances of this dreadful conflict, or touch the hearts of the aggressors, but we can still speak of the human dignity we share and commit ourselves to the long struggle to see that this human dignity is affirmed and defended throughout our world,” he said.

Asked in an interview how faith leaders should respond to Russia’s invasion, Williams said: “The role is, I think, simply to name publicly what’s going on in terms of the offenses to human rights and human dignity, to keep pleading for a cease-fire and to offer as much solidarity and support as we can to the people who are at the receiving end of the violence.” 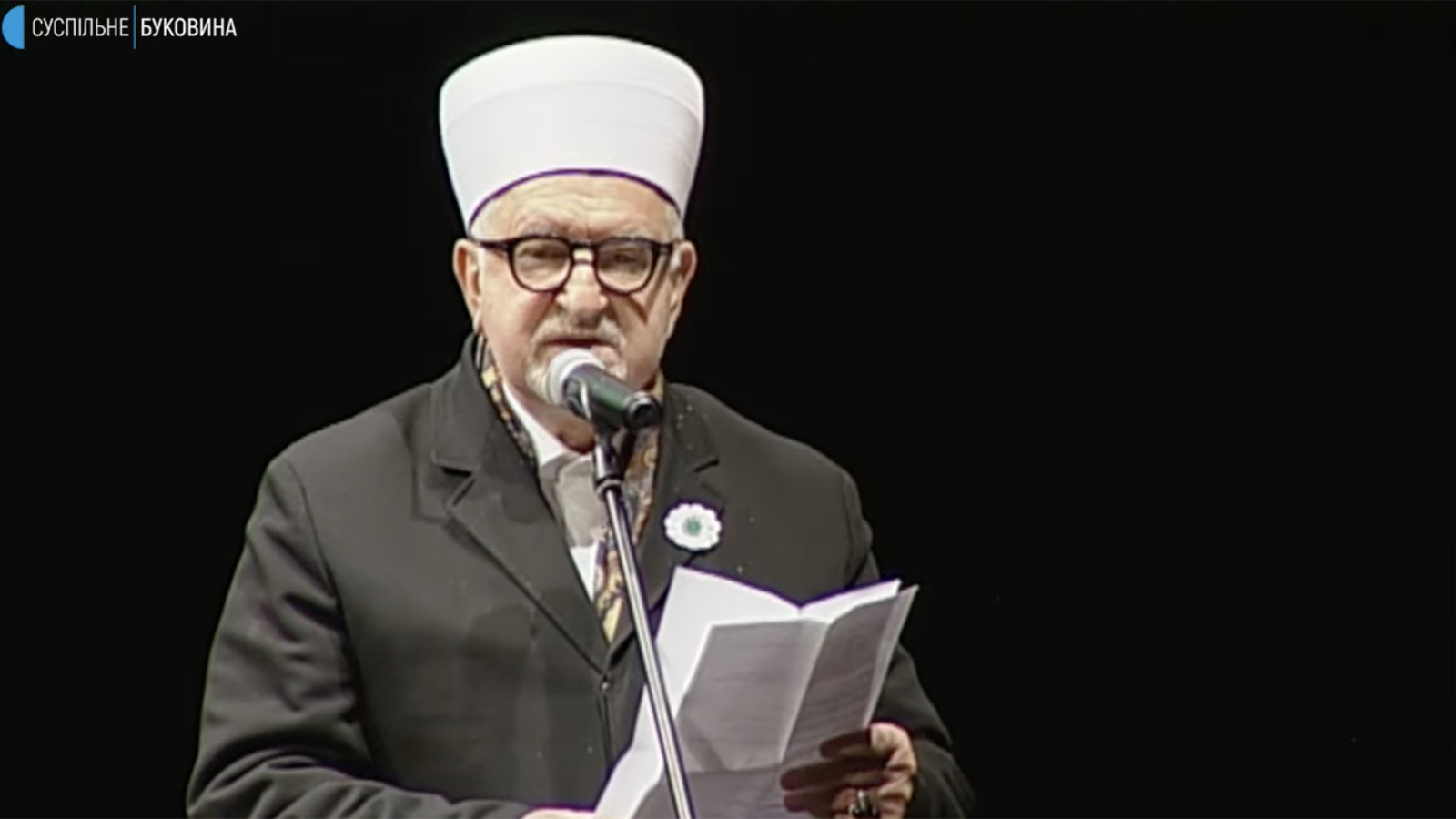 Grand Mufti Mustafa Ceric, emeritus grand mufti of Bosnia, referred to “war criminals” in his prepared remarks, seemingly in reference to allegations Russian troops have committed war crimes against civilians during the invasion. He also said to Ukrainians that as someone from Sarajevo — which bore witness to nationalist wars in the Balkans and subsequent war-crimes trials — “please remember that there are people who will remember you.”

“War criminals have the right to punishment,” he said. He later added: “Let the mother’s tears become prayers so that (what happened in ) Ukraine may never happen again! … Long live Ukraine!”

Lulias was one of several speakers who insisted faith leaders have a role in stopping the violence in Ukraine. “Any religious leader in the world who does not act, and who is indifferent, has a heart of stone,” he said. “A heart which is called an empty void of grace and the blessings of God. To be indifferent may be the greatest of all sins.”

The program included prerecorded choir performances, a song sung in English and Ukrainian and a wind instrument performance by Kohn.

Nghiêm led the group in a contemplative meditation, explaining the practice assisted people during the Vietnam War by helping them “regain their strength.” Swami Atmapriyananda expressed a desire for “artists of communication” who can “codify a language that raises consciences instead of lowering them and inspires us all to embrace peace and freedom.”

“A language that recognizes that evil exists, but that we must not accept it as an inevitable fact,” he said. “Because we can counter it with the commitment and action of all. We can defeat what is inferior with the superior. A new message that reminds us that we all have a common heritage.”

Organizers encouraged those watching the service, which was broadcast live on the BBC, to sign a letter of solidarity on the Faith in Ukraine website, which the Elijah Interfaith Institute helps maintain.

The last two to speak were local clerics — Rabbi Menachem Glitzenshtein and Archbishop Herman of the Orthodox Church of Ukraine, which broke away from the Russian Orthodox Church in 2019.

Speaking in Ukrainian, Glitzenshtein argued the most important commandment is that which forbids killing, saying it applies “all the more when it comes to the whole people, the whole nation.”

He was followed by Archbishop Herman, who addressed Ukraine’s invaders directly.

“Today, I’d like to appeal to the people who have come to invade our Ukrainian land and to kill us,” Herman said. “If you can hear us: Stop. Stop for the sake of your eternal soul. For the sake of this image of God, by which you have been created.”

The archbishop encouraged faith leaders present to lobby their governments to help end the invasion, then concluded his remarks by speaking in English, taking time to emphasize each word.

“Please stop the war in Ukraine,” he said. “May God bless you. Glory to Ukraine.”