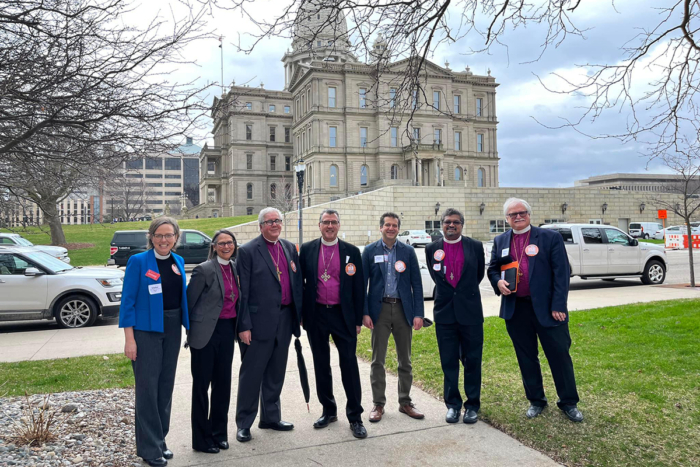 [Episcopal News Service] Episcopalians in Michigan joined other advocates of gun safety legislation for a lobby day April 13 at the Capitol in Lansing, where they met with lawmakers and held a news conference to promote the recently launched End Gun Violence Michigan campaign.

Michigan Bishop Bonnie Perry, Northern Michigan Bishop Rayford Ray and the Rt. Rev. Prince Singh, bishop provisional of Eastern and Western Michigan, were among the Episcopal leaders who participated, along with bishops from the United Methodist Church and the Evangelical Lutheran Church in America.

“Gun violence impacts us all,” Rep. Brenda Carter, a Democrat from Pontiac, said at the news conference. It was held across the street from the Capitol at St. Paul’s Episcopal Church and livestreamed on Facebook.

Carter, vice chair of the state House of Representatives’ Firearm Safety and Gun Violence Prevention Caucus, spoke of losing her own son and nephew in shooting deaths. “The pain of these losses, they never go away. I feel them every day. I feel them now,” she said. “That is why I am here. That is why I want sensible gun violence reform.”

Ray, of the Diocese of Northern Michigan, also spoke at the news conference, referencing a 1934 shooting that took the lives of members of his family. The anguish and trauma of that event is still felt by his family 86 years later, he said.

Jesus took a stand in favor of love over hatred and violence that ended in the cross, Ray said, and today, “we must take a stand and reveal the love of God and commit to ending gun violence.”

End Gun Violence Michigan was formed this year by a coalition of faith-based and secular organizations to advocate what they say are popular, common-sense gun-safety measures, such as universal background checks, safe gun storage requirements and prohibitions on guns in the Capitol and other government buildings. If lawmakers fail to act, campaign organizers have vowed to put forward ballot initiatives to address gun violence.

The ever-present threat of gun violence in the United States was underscored once again on April 12 when a gunman opened fire on a subway car in New York City. At least 23 people were injured in the attack, and police arrested the suspect, 62-year-old Frank R. James, midday April 13.

The new push for gun law reforms in Michigan also was fueled by recent deadly shootings in Southeast Michigan, including the Nov. 30 killing of four students at Oxford High School north of Detroit in Oakland County. A 15-year-old student, Ethan Crumbley, was arrested and charged in that attack.

A person is killed with a gun every eight hours in Michigan, and every two hours a person is injured in a non-fatal incident involving a gun, according to a study of the impact of gun violence in the state by the Center for American Progress.

The Episcopal Church has long advocated for gun-safety measures in response to the increase in gun-related violence in the United States. General Convention has passed resolutions aimed at reducing gun violence dating at least to 1976, and churchwide efforts in recent years have been led by the Bishops United Against Gun Violence network, of which Perry is a convener and Ray and Singh are members.