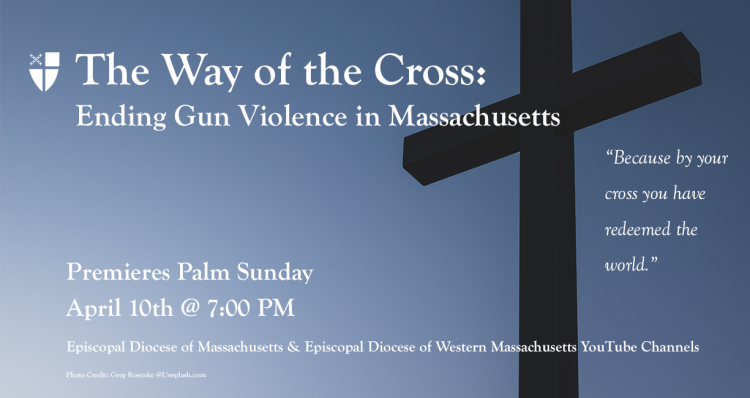 [Diocese of Massachusetts] Episcopalians statewide are invited to “walk” the Way of the Cross together this Holy Week, by visiting 14 church and ministry sites from Falmouth to Great Barrington via a video project that draws on the ancient practice of pilgrimage to bring attention to the current-day scourge of gun violence.

“The Way of the Cross: Ending Gun Violence in Massachusetts” will premiere on Palm Sunday, April 10, at 7 p.m. Eastern on the YouTube channels of the Dioceses of Massachusetts and Western Massachusetts, and then be available thereafter for devotional use by individuals and groups, at home or church.

Each site featured in the video will serve as a station along the way, contributing a self-recorded video segment that invites viewers into prayer and reflection.

He is the diocesan missioner for Latino/Hispanic ministries in the Diocese of Western Massachusetts and a leader in the expanding “B-PEACE” network of Massachusetts Episcopalians.

“The idea came about because we at B-PEACE were imagining different ways to bring awareness to the epidemic of gun violence in our state. Also, we were exploring how to include this in our liturgies in The Episcopal Church,” Reyes explained.

A non-traditional journey through the traditional stations of the cross presented itself as a way to accomplish both.

“The Way of the Cross is a beautiful meditative liturgy that takes you through the Passion of Jesus. You walk from station to station, hear Scripture, pray together, perhaps sing a hymn. It is an opportunity to walk with Jesus to the cross as Jesus walks with us in life. We experience the heartbreak of the cross, and recognize the love of Jesus that brings us all salvation,” Reyes said.

Even with strong gun safety laws already in place in Massachusetts, statistics gathered by Everytown for Gun Safety show that in an average year, 244 people die and 688 are wounded by guns in the state, and guns are the fourth leading cause of death among children and teens here. Gun deaths continue to rise in the U.S., with gun murders increasing sharply in recent years and gun suicides accounting for a majority of U.S. gun deaths, according to the Pew Research Center.

The B-PEACE for Jorge Campaign in the Diocese of Massachusetts has been actively focused on ways to end gun violence since the founding of B-PEACE in 2012 in response to the murder that year of Jorge Fuentes, a teen leader at St. Stephen’s Church in Boston.

Over the past year and a half, a wider B-PEACE network of Episcopalians from both Episcopal dioceses in Massachusetts has been coming together, motived by Jesus’ call to be peacemakers and the recognition that gun violence is a statewide problem that calls for a collaborative response.

“Our efforts will be more effective when the individuals and congregations of our two dioceses pray, learn, act and advocate together against gun violence,” Diocese of Massachusetts Missioner for Networking and Formation Martha Gardner said of the growing network.

“Lives are being taken away, families broken, violence inflicted on innocent people. Our faith calls us to act to protect God’s people and creation. All life is precious. While it is a tough conversation to have, it is important that we have it,” Reyes said. “The Way of the Cross reminds us of the cost of violence and the hope of walking in God’s love.”