[Episcopal News Service] The 80th General Convention will consider a resolution at its meeting in July that seeks to strengthen The Episcopal Church’s opposition to nuclear weapons, an issue that the resolution’s proponents say has gained urgency with Russia’s war in Ukraine.

Resolution C027 was proposed by the Diocese of Central New York.  If passed by General Convention, it would put the church on record endorsing a grassroots campaign known as “Back from the Brink,” which has proposed a five-part plan for abolishing nuclear weapons.

The bishops’ and deputies’ committees on Social Justice and United States Policy held an online hearing on the resolution on March 8 in which about 10 people testified in favor, some from Central New York and others representing the Episcopal Peace Fellowship. They spoke of the unprecedented global catastrophe that would be unleashed by even a small-scale nuclear war.

“All human and animal life could die out,” said Frank Baldwin, an Episcopalian from Ithaca, New York. Baldwin, who helped draft the resolution, testified that it is “our fervent hope and prayer” that the church will join the broad coalition of individuals and groups backing the five policy proposals advocated by Back from the Brink. The proposals are:

The Episcopal Church has advocated for nuclear disarmament in a series of resolutions dating back decades, including a 1976 resolution supporting treaties to limit nuclear weapon proliferation. In 1982, General Convention urged a bilateral freeze on testing, producing and deploying nuclear weapons by the United States and what then was the Soviet Union. Subsequent resolutions stepped up the church’s calls for elimination of nuclear weapons, most recently in 2009. 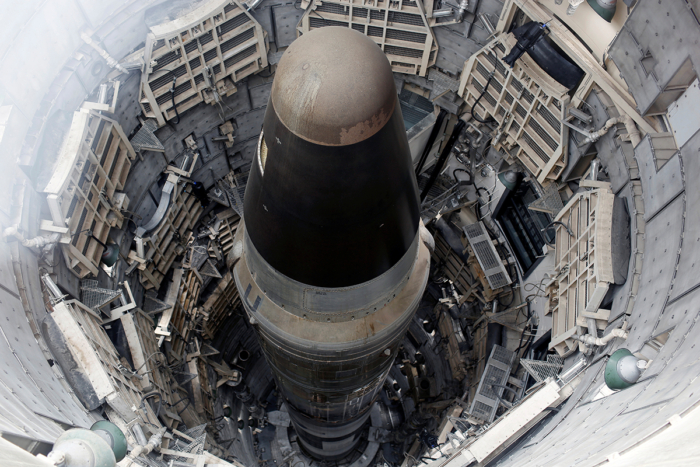 A Titan missile, designed to deliver nuclear warheads at long ranges, is shown from above during a 2019 tour of an intercontinental ballistic missile site that was decommissioned in 1982 and now is maintained as the Titan Missile Museum in Sahuarita, Arizona. Photo: Reuters

The global number of stockpiled nuclear warheads peaked in 1986 at more than 60,000 and has since declined to fewer than 10,000, according to data tracked by the Bulletin of the Atomic Scientists. Today, the United States and Russia own about 90% of the world’s nuclear warheads.

Since the breakup of the Soviet Union in 1991, much of the global attention to nuclear weapons proliferation has focused on the potential for additional countries like Iran and North Korea to gain access to the technology and use it to threaten neighboring countries and the United States. Then on Feb. 24, Russia invaded Ukraine unprovoked. Nuclear tensions escalated three days later, when Russian President Vladimir Putin declared he was putting his country’s nuclear forces into “special combat readiness.”

Russian officials have since tried to tamp down global fears generated by Putin’s nuclear rhetoric, but uncertainty remains about how far Putin might be willing go in deploying nuclear weapons as his military assault faces stiff resistance from Ukrainian forces. Some experts warn that Russia might resort to “tactical” warheads, or smaller nuclear weapons, if it fails in its war efforts while using convention weapons.

That has most Americans worried about the potential for nuclear attacks on Ukraine, and many also are concerned the United States ultimately could be targeted, according to an AP-NORC poll released March 27.

“The whole horror of nuclear weapons sort of being an item again – because weapons are on high alert in Russia – that’s a terrible thing,” Linda Gaither, who helped draft Resolution C027, told Episcopal News Service in an interview. “I hope that will be a motivating factor to take the resolution seriously.”

Gaither lives near Ithaca and attends St. Thomas Episcopal Church in Slaterville Springs.  She has been involved with the Episcopal Peace Fellowship for more than 20 years, and for nearly a decade, she has worked with its Ithaca branch to bring speakers to the area warning of the dangers posed by nuclear proliferation. Baldwin, co-sponsor of the Central New York resolution, also has been active in those efforts through the local branch of Physicians for Social Responsibility.

“We have been trying to raise consciousness,” Gaither said. “It’s going to have to be a grassroots movement in a country that is a leading nuclear nation.”

Physicians for Social Responsibility partnered with the Union of Concerned Scientists in 2017 to launch Back from the Brink. Local governments, community groups and faith organizations in Central New York were among those across the country that have endorsed the campaign.

Ithaca’s city council passed a resolution supporting it in October 2018, followed by the town board in nearby Lansing in February 2019. The vestry from Gaither’s parish voted in 2019 to endorse the campaign, as did the vestry of St. John’s Episcopal Church in Ithaca. Gaither’s and Baldwin’s resolution to the Central New York Diocesan Convention passed in November 2020 with nearly unanimous support, Gaither said.

Those who testified at the March 8 hearing on General Convention’s Resolution C027 also were unanimous in their support. Sally Jones from Staten Island, New York, cited the continued threat that a military conflict between the United States and Russia could escalate to a nuclear standoff. “This arsenal has not made us safer but has put the whole world on edge,” she said.

The threat alone is doing harm by raising anxiety levels, argued the Rev. Taylor Daynes, an Episcopal chaplain at Cornell University in Ithaca. “The fear and anguish that the threat of nuclear war is waging in people’s lives is truly destructive,” she testified at the hearing.