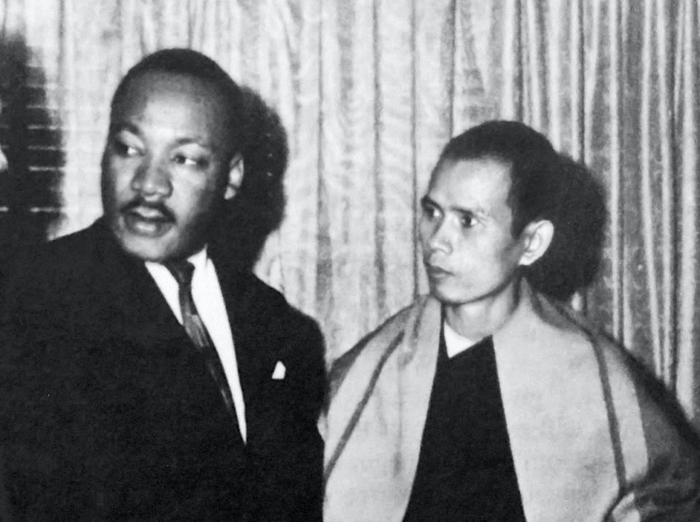 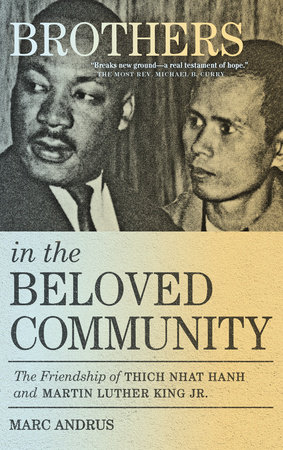 The book, released in November, chronicles the brief but deep connection between the two men, using letters and archival material including an unpublished play by Thich Nhat Hanh, the widely influential Buddhist monk who died on Jan. 22 at age 95. Andrus will discuss the book in conversation with Presiding Bishop Michael Curry, Washington Bishop Mariann Budde and longtime civil rights activist the Rev. Paul Smith. Registration is free but required to access the Zoom event.

In some ways, King and Thich Nhat Hanh could not have been more different. One was an African American Christian preacher, the other a Vietnamese Buddhist monk, and in the 1960s, their countries were at war. But both were giants of the peace and nonviolence movement, and their little-known friendship fascinated Andrus while earning his doctorate in philosophy and religious studies from the California Institute of Integral Studies.

He had been very familiar with King and Thich Nhat Hanh separately, but during his studies he learned that the two had exchanged letters and met, developing a bond over their shared opposition to the Vietnam War and commitment to nonviolent action. King publicly nominated Thich Nhat Hanh for the Nobel Peace Prize in 1967, but it was not awarded that year.

Andrus was specifically interested in King’s concept of Beloved Community, a vision of communal care and respect that has been adopted by Curry and other Episcopal leaders. In 2014, Thich Nhat Hanh said that on the day King was assassinated in 1968, he made a vow to carry forward King’s commitment to Beloved Community through his own work in promoting mindfulness, and that he had felt King’s support in upholding that vow. Andrus was intrigued by the statement and explored it in his dissertation.

“How did he keep that vow? What does that look like? And then what did he mean when he said he felt Martin’s support?” Andrus told Episcopal News Service. “So I really dug in on the research on those two questions.”

One of Andrus’s research sources was a short play that was written by Thich Nhat Hanh but has never been published or produced. The play imagines the souls of five young Buddhists – four who were executed during the Vietnam War and one who burned herself alive protesting it – navigating the afterlife as bodhisattvas, who remain in the earthly cycle of life to help all beings attain enlightenment. Through his analysis of the play, Andrus argues that Thich Nhat Hanh considered King a bodhisattva, meaning his presence in the world would continue after his death.

“All of life continues, as the Episcopal liturgy says: Death does not end. It simply changes,” Andrus said. “People who are full of life and love have the ability to continue to lend help to those of us who are struggling in the mortal world.” 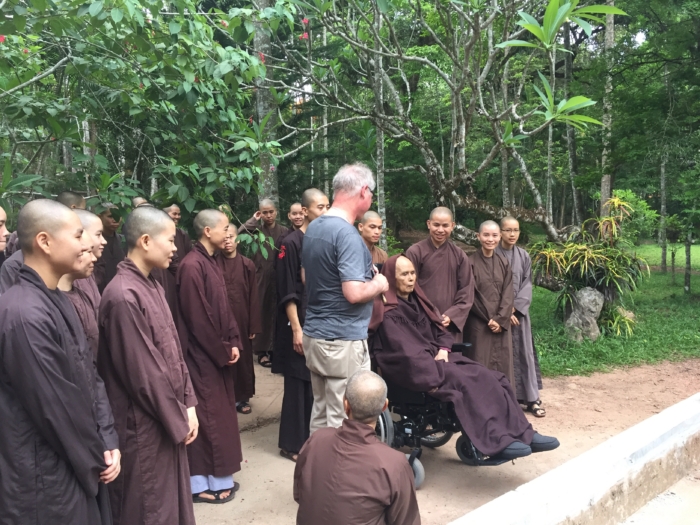 Andrus met Thich Nhat Hanh while he was still alive during a trip he made to his monastery in Vietnam in June 2019. By that time, Thich Nhat Hanh had had a stroke and was unable to speak. Andrus interviewed his closest friends and confidants and spent an hour with him in his hermitage.

Parallax Press, which was established by Thich Nhat Hanh, heard about Andrus’s dissertation and offered to turn it into a book. Andrus said he has also gotten permission from Parallax to produce the first-ever production of Thich Nhat Hanh’s short play. Andrus and a group of collaborators – including a documentary filmmaker and a Vietnamese actor – plan to produce a filmed performance of the play sometime in the next year in the Bay Area or Los Angeles.

Andrus hopes the book and the play will offer a message of hope and solidarity to all who are struggling to cope with the suffering, violence and injustice they see in the world today.

“I think it’s just a completely hopeful message for today, when we’re confronting so much, when we don’t know where to turn, or we don’t know that we have the help we need … to know that these luminous beings like Thich Nhat Hanh and Martin Luther King are present with us,” he said.