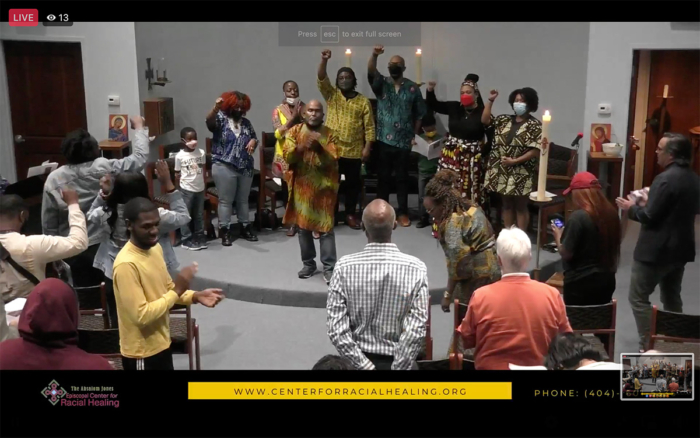 Clark Atlanta University Professor Dan Black leads the Voices of Freedom Choir in a rousing “Say Their Names” remembrance of the Rev. Martin Luther King Jr. and other civil rights leaders and activists, and victims of violence, at a commemoration on the 54th anniversary of King’s assassination.

[Episcopal News Service] Students from Atlanta’s historically Black colleges gathered on April 4 in the chapel at the Absalom Jones Center for Racial Healing to commemorate the 54th anniversary of the assassination of Martin Luther King Jr. To a rousing rendition of “Say Their Names,” they rose to their feet, clapping, dancing and shouting three times each the names of civil rights freedom riders like Episcopal seminarian Jonathan Daniels, victims of police violence George Floyd and Breonna Taylor, and of historic statesmen, like Booker T. Washington.

“This service was an outreach to the students,” from both Spelman and Morehouse colleges, and Clark Atlanta University, the Rev. Lynne Washington, rector of Atlanta’s Church of the Incarnation, and the commemoration’s guest officiant, told Episcopal News Service. “It was exhilarating. There were whites and Blacks and young people and kids and seniors. It was one of those moments when it was very exciting to be an Episcopalian in an African American worship environment.”

The Voices of Freedom Choir, directed by Clark Professor Dan Black, led the congregation in the repetitive rallying cry, “Say Their Names,” inspired by the 2015 song  “Say Her Name,” by Janelle Monae, which paid tribute to Black women killed by police violence. A star-studded 2021 remix included Monae, Beyonce, Alicia Keys, Zoe Kravitz and others and named over 50 victims of police violence, each name repeated three times as a rallying cry.

“April 4th is a day that is etched in the national consciousness as the day that Martin Luther King Jr. was senselessly murdered in Memphis, Tennessee,” according to the center website. “Today we remember his martyrdom, as well as other martyrs who died for the cause of civil and human rights. We rejoice that these saints are continuing their good work on our behalf.

“At the same time, we also remember their example and acknowledge our grief at their deaths and hope for a day when our world can be healed from violence and oppression.”

Absalom Jones Center Director Catherine Meeks, who couldn’t attend the event, has said she specifically aims to reach out to students at the colleges, located nearby.

“The Absalom Jones Center for Racial Healing is in some sense a model,” Washington said. “We have had the Canterbury ministries, but this is a model for what could happen for historically Black colleges, that partnership and the space that is created for young people is important. After all, Atlanta is Dr. King’s home, and to see young people commemorating him in this way, it’s exhilarating.

“It’s a community space that lifts up the African American community, but is not limited to the African American community.  “The service was a liturgy that culturally spoke, at a time when many young people are not coming into the Episcopal Church or are not engaged with our worship. But this gave the opportunity to show the flexibility of our worship, which is oftentimes not utilized,” she added.

Washington, whose twin sons John and Noah are the great-great-grandsons of Booker T. Washington, said such commemorations are important.

“It’s important that we remember those civil rights leaders who have died on behalf of not just African Americans, but for liberty and freedom for everybody,” she said.

Booker T. Washington was born into slavery in Virginia, learned to read, and went on to lead the Tuskegee Institute for more than 30 years. An author, educator, orator, he served as an advisor to U.S. presidents and was a nationally known advocate for the Black community.

Other names mentioned during the service, included Andrew Goodman, Michael Schwerner and James Cheney, the three civil rights workers who were murdered in Philadelphia, Mississippi, in June 1964. The men had been working with the Freedom Summer campaign, attempting to register systematically disenfranchised African American voters.

“People who stood for justice and freedom were all commemorated under the umbrella of Martin Luther King Jr.,” Washington said. Others were Fannie Lou Hamer, Sojourner Truth and Emmet Till.

In 1955, while visiting family in Mississippi, Till, a 14-year-old from Chicago, Illinois, was abducted, tortured and murdered after he was accused of whistling at a white woman.

Till’s murder gained national attention after his mutilated body was returned to Chicago and his mother insisted on an open casket at his funeral. His killers were exonerated by an all-white jury, though they later admitted to the crime. On March 29, 2022, President Joe Biden signed the Emmett Till Antilynching Act, which allows alleged hate crimes to be prosecuted as lynching.

Daniels, the Episcopal seminarian, had answered King’s call to join the 1960s civil rights movement and to take part in the march from Selma to the state capital of Montgomery, Alabama. He was killed in 1965 while shielding 17-year-old Ruby Sales, another activist, from gunfire. His death generated support for the civil rights movement and he is commemorated in The Episcopal Church calendar on August 20, the anniversary of his death.

Sales went on to attend an Episcopal divinity school, and to found The SpiritHouse Project, a spiritual, artistic and social outreach center dedicated to Daniels in Atlanta.

Both Floyd and Breonna were killed by police. Floyd was killed May 25, 2020, in Minneapolis, Minnesota, by police officer Derek Chauvin, who was later convicted of murder. Taylor, was fatally shot inside her Louisville, Kentucky, apartment on March 13, 2020, by police officers during a botched drug investigation of a neighboring apartment. Taylor, 26, an emergency medical technician, was shot six times. Just one of the at least seven police officers involved in Taylor’s death was charged and later acquitted.

–The Rev. Pat McCaughan is a Los Angeles-based correspondent for Episcopal News Service.