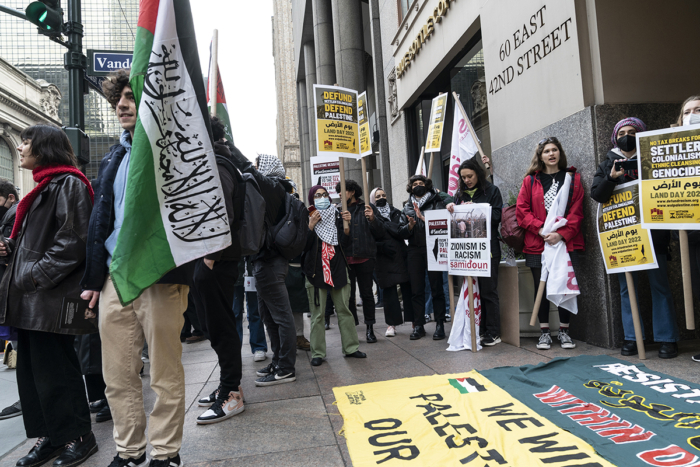 Pro-Palestinian and pro-Israel rallies are held on 42nd Street in Manhattan in New York on March 30. Photo: Associated Press

[Episcopal News Service] The Middle East, though thousands of miles from Maryland, will be on the minds of bishops and deputies who meet in Baltimore this July at the 80th General Convention. Proposals addressing the Israeli-Palestinian conflict have been among the most hotly debated resolutions at past triennial churchwide gatherings, and several new proposals await this General Convention.

So far, nine resolutions relating to the ongoing conflict in the Middle East have been assigned to the bishops’ and deputies’ committees on Social Justice & International Policy. Those two committees, which typically meet as one, held an online hearing March 31 to take testimony on three of the resolutions. Another hearing for the other six is scheduled for April 8.

Information on attending or testifying at the hearing is available on the General Convention website.

All nine of the Middle East resolutions were proposed by dioceses; several of the resolutions’ topics overlap. For instance, the dioceses of Chicago and Washington each asked General Convention to oppose state and federal legislation that penalizes or criminalizes boycotts related to Israel’s treatment of Palestinians and its occupation of Palestinian territories. The two dioceses’ resolutions are short and almost identical, with Chicago additionally singling out anti-boycott legislation as “an infringement of First Amendment rights.”

Several of the people who testified March 31 said criticism of Israeli government policies should not be confused with antisemitism or criticism of Judaism. “What would our country be like if we could not criticize our government?” said Pauline Coffman, a Presbyterian who is active in the Chicago Faith Coalition on Middle East Policy.

Wafic Faour, an Episcopalian from Vermont, described his own family’s struggle as Palestinian refugees displaced by the Arab-Israeli War of 1948. He was born in a refugee camp in Lebanon, and other members of his family still live in that country, unable to return to their homeland in what is now northern Israel. Faour said he was testifying in support of the right of Americans to boycott, not out of concern for his own family but for fellow Palestinians who live in Israel and have been granted Israeli citizenship without fully receiving the rights of citizens.

They “continually face discrimination and racism under apartheid Israeli laws,” Faour said. “The Israeli government imposes different sets of standards toward its non-Jewish citizens that affects every facet and function of daily living.”

The Palestinian-led movement known as “boycott, divestment and sanctions,” or BDS, has gained international support from churches — including the Presbyterian and United Methodist churches — universities and other institutions as it seeks to apply economic pressure on Israel over its treatment of Palestinians. Critics have accused the movement of waging a delegitimization campaign against Israel rooted in antisemitism.

Rodney Long of the Diocese of Washington testified that the pro-boycott resolutions “misrepresent the character and goals of the BDS movement.” Long called it a “pernicious movement aimed at the destruction of Israel as a Jewish state” that “works against the cause of peace and reconciliation.”

Los Angeles Bishop John Harvey Taylor, the vice chair of the bishops’ committee, spoke briefly during the testimony to suggest the free speech arguments for the resolutions might be more productive than arguments in favor of the boycotts themselves.

“I’m not particularly a fan of BDS, which strikes me as a broad brush,” Taylor said. “It seems to me as though one can be for both of these resolutions and against BDS.”

Steve France, an Episcopal Peace Fellowship member from the Diocese of Washington, echoed Taylor’s point. Laws that outlaw boycotts “are taking away Americans’ right of free speech,” he testified. “They threaten the rights of everyone in America.”

The third resolution discussed at the online hearing March 31 was propose by the Diocese of Olympia. It seeks to affirm “the right of the State of Israel to exist” while also condemning “the continued occupation, segregation and oppression of the Palestinian people.” If passed by General Convention, it would call on the president and U.S. Congress to oppose Israeli laws “that result in unequal rights for two peoples.”

General Convention has considered and passed dozens of resolutions about the Israeli-Palestinian conflict over the years while supporting peace efforts in the Middle East and the Holy Land. The most contentious issue at the 79th General Convention in 2018 was whether The Episcopal Church should join other churches in divesting from companies doing business in Israel because of its occupation of Palestinian territories and the expansion of Israeli settlements in those territories, particularly in the West Bank.

The debates that year highlighted how delicate such issues can be, sometimes down to the ways the language of resolutions might be perceived by the different sides. The House of Bishops rejected a resolution that explicitly called for the church to develop a “human rights social criteria investment screen” related to Israeli occupation to Palestinian lands. Bishops and deputies agreed instead on the softer language contained in Resolution B016, which spoke more generally of analyzing church investments in light of human rights concerns in the region.

At the time, activists on both sides of the issue praised the vote – because it both stopped short of calling for a full “divestment” while establishing justification for the church eventually to shift its investments away from companies profiting off the occupation.

Another resolution passed in 2018 affirmed the church’s position that Jerusalem is “a holy city to the three Abrahamic faiths” and should be “the shared capital of both the State of Israel and of a potential Palestinian state.” The resolution asked the House of Bishops to issue a pastoral letter “supporting Jerusalem’s prophetic identity as the Holy City of Peace.”

The bishops approved and released their letter at their recent meeting in March 2022. The two-page message included a call for Jews, Christians and Muslims to “do all in our power to further and to deepen the commitment to peace with justice, and to its realization.”

“The letter is a regrettably tepid response to the decades of a tragic constellation of injustices and violence against the Palestinian citizens and residents of Jerusalem, including the Palestinian Christians,” the steering committee said in its written response.

The word “apartheid” is another frequent sticking point and dividing line in the church’s perennial debate on the Israeli-Palestinian conflict. General Convention rejected a resolution in 2018 that sought to label Israel’s unequal policies toward Jewish Israelis and Arab Israelis as evidence of an “apartheid” state, similar to the South African government’s former policy of racial separation.

That issue is back on the agenda for the 80th General Convention. Of the six resolutions scheduled for an April 8 hearing, three would oppose policies in Israel that they say amount to “apartheid.” The resolutions were proposed by the dioceses of Chicago, Vermont and Washington.

Two other resolutions proposed by dioceses of Chicago and Washington would condemn Christian Zionism, a disputed and controversial theological belief that the establishment of Israel in 1948 was a precursor to the eventual second coming of Jesus at the end of times.

The ninth resolution under consideration this year by the bishops and deputies was proposed by the Diocese of Maryland. It would commit the church to rooting out antisemitism in its discourse around the Israeli-Palestinian conflict and pledging to “defer to the interests of our brothers and sisters in the Holy Land,” including leaders of the Anglican province that includes the Diocese of Jerusalem.