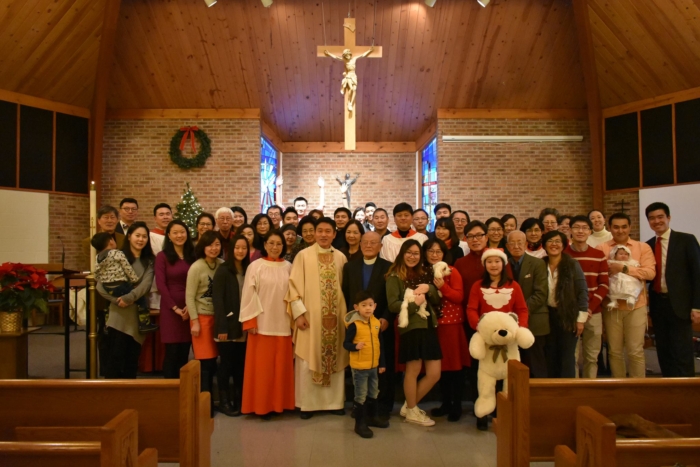 The congregation of One in Christ Episcopal Church in Prospect Heights, Illinois. Courtesy photo

[Diocese of Chicago] Late last year, One in Christ Episcopal Church in Prospect Heights, Illinois, was awarded a Becoming Beloved Community-AAPI Grant of $9,450 by the Executive Council of The Episcopal Church. The funds, says the Rev. Indon Paul Joo, the church’s vicar, will help the congregation of Korean immigrants “address its own racial reckoning.”

Using grant funds, One in Christ will partner with three organizations in the Chicago Korean Sanctuary Church Network, a network of Korean churches, civic groups, and lawyers in the Chicago area, to “promote learning and understanding around racial and gender justice, reconciliation and healing within One In Christ and beyond.” The grant will also help support a network campaign that provides financial assistance to undocumented immigrants who are single parents.

One in Christ is home to many first-generation immigrants, most of whom are small business owners, who have lived in the United States for 30 or 40 years, says Joo. “They are working very hard for the American dream. They have individualistic thoughts — you work hard, you get the American dream,” he says. Until recently, “when they think about Black Lives Matter, they think, ‘That’s Black Lives Matter, not us,’” he said.

Joo traces the divide between the Korean community and the Black community to protests that followed the beating of Rodney King by Los Angeles police officers in 1992. More than 50 people died, and rioters and looters did more than $1 billion in damage, about half to Korean-owned small businesses, according to CNN. Protests on the South Side of Chicago after the murder of George Floyd by a Minneapolis police officer in 2020 also damaged Korean-owned businesses, including one owned by a One in Christ member.

“Then, last year, the Atlanta spa shootings happened, and that was a wakeup call,” Joo says, referring to the March 2021 murder of eight people, including four Korean women, by a white man at several small businesses in Georgia. “Wow — racism is not just about Black people,” Joo recalls church members saying.

In the grant proposal, Joo wrote that he and many One in Christ members “have admired and learned from the Black Lives Matter movement. At the same time, many Korean business owners are processing their own trauma after experiencing vandalism during lootings that followed peaceful protests. The rise of anti-Asian violence across the nation also rocked our community, placing fear and anxiety in many.

“The grant makes it possible to advocate for antiracism and to educate about civic engagement in order to create Beloved Community and a more just society,” he said.

Ji Hye Kim, a member of One in Christ for four years and executive director of KAN-WIN, a nonprofit organization that works to end gender-based violence in the Asian American community and beyond, believes that the grant provides an ideal opportunity to start a dialogue in the Korean American community about anti-Asian violence.

“It’s always been an issue, but now the media is portraying it more,” she says. “Community members are scared, and often there is a lack of proper framework to understand it as a systemic issue. When people are scared, often their first response is, ‘How am I going to protect myself and my family?’ I hope there will be a variety of ways to understand how we can address this issue collectively rather than individually.”

Joo hopes to share the results of the grant project with the Diocese of Chicago once the education, healing and reconciliation programs are complete. In the meantime, he hopes that his fellow Episcopalians will pray for the people of One in Christ and recognize the benefits that immigrants bring to their communities.

As an example, he cites a program he has led during the pandemic to prepare church members and other Korean immigrants, including himself and his brother, to earn commercial driver’s licenses and fill the critical need for school bus drivers in Chicago.

“We are a working collaboration with other social service agencies to spread the Gospel,” he says. “We are small, but we are the window of The Episcopal Church to the Korean community.”