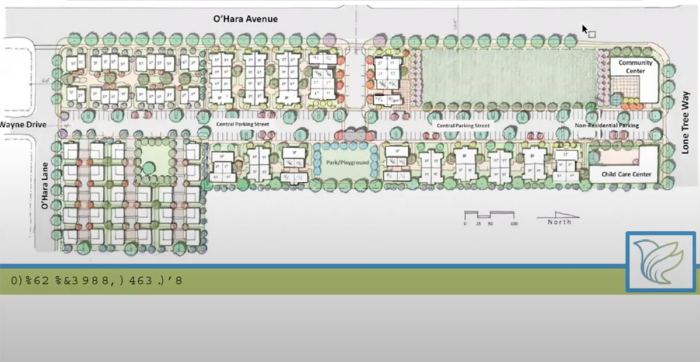 An architectural rendering of Blue Bird Village was presented during a community meeting on Feb. 16, 2022.

[Episcopal News Service] The Diocese of California, which covers the San Francisco Bay Area, is planning to use a vacant lot it owns to address the region’s housing crisis while practicing environmental stewardship and promoting local food. The project will combine an affordable housing complex and an organic farm and orchard operated by the diocese’s new Farm Church Ministry on one plot of land, creating what the diocese hopes will be a healthy, self-sustaining community.

The project – still in the planning stages – would build Blue Bird Village and Jubilee Farm in Brentwood, a rapidly growing city in the East Bay region between San Francisco and Stockton. The area, once mostly farmland, has been swallowed by suburban sprawl in recent years as the Bay Area’s economic boom continues and housing demand – particularly affordable housing – outpaces supply.

Blue Bird Village would consist of about 150 housing units in a mix of styles and price points. Up to 100 units would be rentals for families with incomes up to 60% of the county median income. Twenty-four townhomes would be designated for first-time homeowners earning 80 to 120% of the median income. About 26 to 30 units would be market-rate homes for sale. At the center of it all would be Jubilee Farm, a small organic farm and orchard managed by the diocese’s Farm Church Ministry, where residents could help grow food for themselves and to offer those experiencing food insecurity in the community.

The need for affordable homes continues to grow as the national affordable housing crisis deepens. Since the onset of the COVID-19 pandemic, U.S. home prices and rents have soared to their highest levels ever while the median household income declined. The Bay Area has long had some of the highest housing costs in the U.S.; even with the region’s high incomes, only 22% of families can afford the median home price. To afford a median one-bedroom apartment in the Bay Area, a minimum-wage worker would have to work 112 hours per week.

“At least five years ago, we were coming to the conclusion that housing was really the defining issue of our time,” said Kathleen Piraino, executive director of the Episcopal Impact Fund, a nonprofit affiliated with the diocese that focuses on alleviating poverty in the Bay Area. Piraino is shepherding Blue Bird Village toward reality, bringing the various components and partners together.

The 9-acre lot in Brentwood has been owned by the diocese since 2002, when housing developments were rapidly spreading across the formerly agricultural area, with the intention of building a church there. Those plans never came to fruition.

The Rev. Jane Stratford, vicar of St. Anna’s Episcopal Church in nearby Antioch, has lived in Brentwood for about 30 years and has watched the landscape change, with smaller, family-owned farming operations giving way to industrial agriculture and fertile ground being paved over for development. She has also seen how climate change and unsustainable agricultural practices have desiccated and damaged the land. Looking at the diocese’s empty plot, she saw an opportunity to revive the land by establishing a farm ministry there – “a place where God is worshipped through connection to the land God created, where people care for creation by cultivating and nurturing the earth, feeding the hungry, and practicing environmental sustainability,” she wrote in a reflection for the diocese.

“The almost nine acres the diocese owns in Brentwood has been fallow for much longer than a season, waiting, watching, wondering,” she wrote.

California Bishop Marc Andrus appointed Stratford the diocese’s first farm church missioner, with the intent of creating a farm-based worshiping community similar to other “farm churches” around the country like Mission Farm in Vermont and Plainsong Farm in Michigan.

“The organic part is appealing to people,” Andrus told Episcopal News Service. “I think we’ve learned that the lure of the pesticide-based high-intensity agriculture – with monocrops and so on – it was an illusion. And we’re emerging from that and people are more and more realizing that.”

Meanwhile, after another parish had used part of its land to build a counseling center for people who experience homelessness, the empty lot was suggested for a similar project. The idea evolved into a “beautiful synergy” between affordable housing and a small farm, Andrus said, noting that even an acre can produce thousands of pounds of organic food per season.

“‘Food deserts’ is a term that has been used more and more,” Andrus said, “so the ability to not only relate to the Earth in a different way for ourselves, but to also help others have healthier diets – this seems like a really holy, sacred kind of call.”

Under the current plan, the project will include a community center where worship could be offered and a shaded grove with seating that could be used for outdoor worship, Andrus said.

Many other churches are using their land for housing – in some cases by developing large affordable housing buildings, in others by selling the land for market-rate condos. Neither approach seemed quite right to Andrus.

“Housing is a huge need, but I wasn’t willing to make it all built environment,” he said. “We just cover land over and over.”

Andrus pointed to studies that have shown that in urban areas, poorer people have far less tree cover than wealthier people. As a result, they suffer adverse health impacts and have to spend more on air conditioning.

For Blue Bird Village, the diocese plans to sell the portion of the land that will be used for market-rate homes and lease the rest to an affordable housing developer, Eden Housing. Both the sale and the lease would generate income for the diocese, which could be reinvested into the farming and community aspects of the project. The idea is that the housing complex itself will be owned and operated by Eden as a self-sufficient entity.

Piraino expects that the project could be ready for occupancy in five years, but the project has encountered resistance in its planning stages.

“There’s significant local opposition,” Andrus said. “There’s a lot of NIMBYism. There’s 500 people that have signed a petition to say, ‘We don’t want this.’”

The project’s opponents have claimed Blue Bird Village would increase crime and decrease property values.  Studies of similar affordable housing developments around the country, Andrus noted, have shown that they have little effect on the surrounding area. A few neighbors have explicitly expressed classism in their opposition to Blue Bird Village.

“We don’t want the riff-raff! Take it somewhere else!” one Brentwood resident said during a public meeting about the project.

Andrus and Piraino are confident that the project will move forward anyway. Despite the opposition of some locals, in general, “people light up” when they hear about it, Andrus said.

In the meantime, Piraino is consulting with other congregations in the diocese that have land that could be repurposed or better used.

“Many of them have sat on property that is no longer strategically valuable to them, or at least not the entire property that they sit on,” Piraino said. “It’s often a case of a congregation that’s declining in size … in a building that’s much too big and is taking all their resources to maintain.”

In some cases, the congregation might stay on the property but in a space that’s better suited to them. St. James Episcopal Church/Iglesia Episcopal de Santiago – a bilingual congregation in Oakland – is another church whose property is being reimagined. Through the Episcopal Impact Fund, the church turned part of the parking lot into a community garden where an Indigenous permaculture program helps grow food for the community and teaches students.

The church building itself is in need of cost-prohibitive maintenance, Andrus said, but the parish hall – the oldest structure in the diocese, dating to 1850 – could host the congregation. A proposal is underway to turn some old houses on the church property into an affordable housing complex and turn the church into a community co-working space using funds generated by the housing development. The garden would be incorporated into the plan.

“There is something that feels so right about providing good housing and also farming and those being done together,” Andrus said.

– Egan Millard is an assistant editor and reporter for Episcopal News Service. He can be reached at emillard@episcopalchurch.org