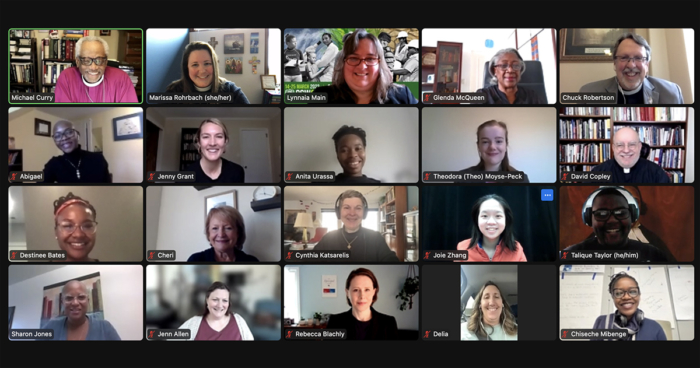 Presiding Bishop Michael Curry meets with members of the Episcopal delegation to the UNCSW on March 24. Members of the leadership team, including members of the presiding bishop’s staff and other Episcopal Church offices, also attended. Screenshot: Marissa Rohrbach

[Episcopal News Service] Since the start of the 66th meeting of the United Nations Commission on the Status of Women on March 14, eight Episcopal delegates have spent their time listening, learning and finding ways to speak up about the intersection of gender equality and climate change, which are the key elements of this year’s UNCSW theme – achieving gender equality and the empowerment of all women and girls in the context of climate change, environmental and disaster risk reduction policies and programs.

The delegates are participating in all events online, which make for some long days, Lynnaia Main, The Episcopal Church representative to the United Nations, told Episcopal News Service. “They are online at least six hours a day,” she said, watching official plenary meetings involving representatives of U.N. member nations, attending worship services and participating in some of the hundreds of online events offered by interested groups.

Episcopal delegates were selected by Presiding Bishop Michael Curry and represent him in their work. They also are charged with advocating for the three priorities Curry outlined in a written statement to the UNCSW:

The Anglican Communion also has official UNCSW delegates, one of whom is the Rev. Rachel Taber-Hamilton, rector of Trinity Episcopal Church in Everett, Washington, who serves as The Episcopal Church representative on the board of the Anglican Indigenous Network.

Episcopal delegate the Rev. Marissa Rohrbach told ENS via email that all the delegates are “very mindful that we’re representing the voice and the ministry of the larger church” as they go about their work. “It’s a really powerful thing for the church to be present in these spaces, for The Episcopal Church and the Anglican Communion to have voices in these rooms,” she said.

Main noted that the UNCSW is the largest global grassroots women’s gathering in the world, and the meeting’s end result is a document about the theme on which member nations have agreed. Speaking up to influence that document is part of the work of Episcopal delegates, as they “represent and embody General Convention policy on the subjects of the presiding bishop’s statement,” she said.

The advocacy part of delegates’ work is made harder by not being able to be in New York, where the meeting takes place, Main said, but all of them are doing what they can, engaging in some online advocacy during UNCSW, including commenting via social media channels and blogs, and posting comments and questions in Zoom meeting chat boxes.

Delegate Anita Urassa said since being involved with the UNCSW, she has learned the importance of advocacy and the need to get more women “at the decision-making table.” She said she has been inspired to continue with advocacy work in her local community.

On March 24 delegates had the chance to meet with Curry in an online gathering, something delegate Cheri Gage called “the ultimate inspiration.” Delegates were joined in that meeting by a leadership team that has been assisting them since before the start of UNCSW, made up of members of the presiding bishop’s staff, including representatives from The Episcopal Church offices of Global Partnerships, Government Relations, Ecumenical and Interreligious Relations and Creation Care, as well as staff of Episcopal Relief & Development. Former delegates also are supporting this year’s delegates. 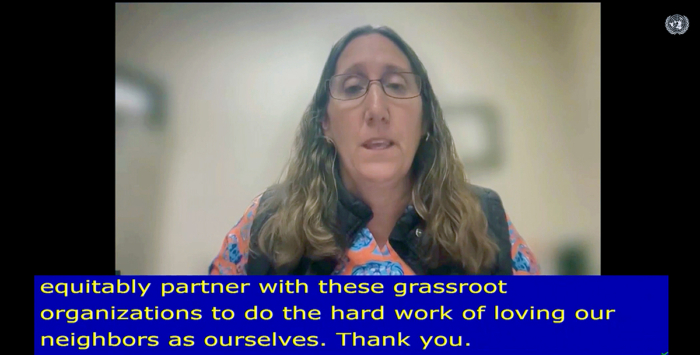 Delia Heck, a member of the leadership team assisting UNSCW delegates, offers testimony on behalf of The Episcopal Church to a UNSCW expert panel on March 22. Heck is a professor of environmental science at Ferrum College in Virginia. Screenshot: Melodie Woerman

Main said another highlight of the 11-day UNCSW meeting came when one of the members of that leadership team, Delia Heck, was invited to address a March 22 UNCSW expert panel. Heck is a professor of environmental science at Ferrum College in Virginia and spoke on the church’s work in environmental stewardship and how the Episcopal Asset Map allows people to examine and interpret environmental, climatic, social and economic data across the church. Heck is a member of St. Peter’s-in-the-Mountains in Callaway, Virginia.

Main said Heck’s presentation was important because The Episcopal Church signs up to offer testimony at U.N. events all the time but rarely is chosen. “This reflects Delia’s expertise, which we shared in the application for her to speak,” she said.