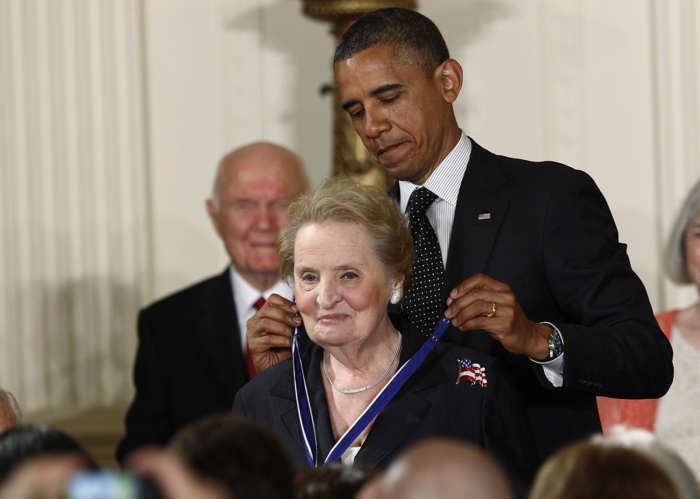 U.S. President Barack Obama awards a 2012 Presidential Medal of Freedom to former U.S. Secretary of State Madeleine Albright during a ceremony in the East Room of the White House in Washington, May 29, 2012. Albright died on March 23, 2022, at age 84. Photo: Kevin Lamarque/REUTERS

[Episcopal News Service] Madeleine Albright, the former secretary of state who wrote about her complex faith journey to The Episcopal Church and served in leadership roles at various Episcopal institutions, died March 23 of cancer. She was 84.

Albright regularly attended St. John’s Episcopal Church in Washington, D.C.’s Georgetown neighborhood and was serving on Washington National Cathedral’s cathedral chapter (a governing body similar to a vestry) at the time of her death. She has also chaired the board of the Beauvoir School and served on the board of directors of the College of Preachers, both institutions affiliated with the National Cathedral.

She also participated in various cathedral events dealing with religion and politics and gave the eulogy at Colin Powell’s funeral there in November 2021.

“We mourn the loss of Madeline Albright, committed Episcopalian and trailblazing ambassador,” Presiding Bishop Michael Curry said in a statement. “I am particularly thankful for her guiding belief that religious leaders have an essential role to play in foreign policy, and for her Anglican sensibility in navigating difference and diversity.”

Albright was born into a Jewish family in Czechoslovakia in 1937. Three of her grandparents were killed in Nazi concentration camps. Her family fled to England – where they converted to Catholicism – and then the U.S. However, Albright said she was never told about her Jewish heritage until a Washington Post reporter uncovered it in 1997.

She joined The Episcopal Church as a young adult when she married Joseph Medill Patterson Albright in 1959. She wrote about her faith in her book “The Mighty and the Almighty: Reflections on America, God, and World Affairs,” in which she explored the influence of religion on politics and argued that foreign policy could benefit from greater involvement from religious leaders.

“In looking at what was going on in the world, it was evident that religion and the force of religion and people’s interpretation of how they saw God really is very much a part of international relations,” she said in an interview with PBS’s Religion & Ethics NewsWeekly. “Rather than keeping religion and religious leaders out of things, we need their help.” 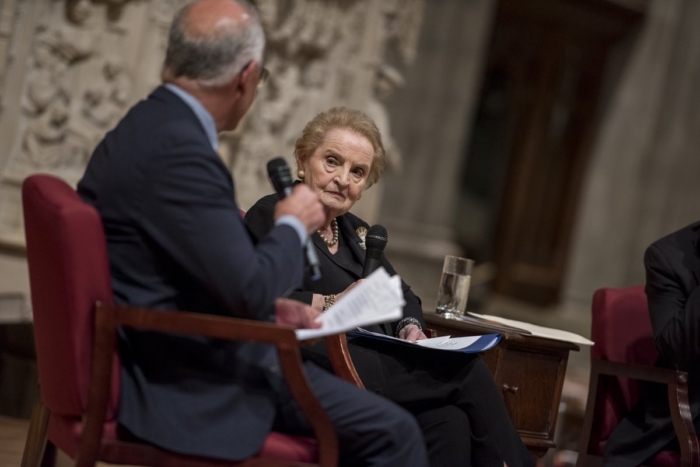 The Very Rev. Randy Hollerith, dean of the National Cathedral, told WUSA-TV that Albright’s faith “showed in how she shared herself with these church institutions.”

“She is an irreplaceable, wonderful human being and I give thanks for her life and the gifts she’s given to so many.”

The Rev. Gini Gerbasi, rector of St. John’s in Georgetown, remembered Albright’s down-to-Earth presence in the congregation and her “gorgeous” singing voice.

“We asked her if she wanted to sing in the choir, and she didn’t want to make it about her,” Gerbasi told WUSA-TV. “She just wanted to blend in like everyone else.”

In a remembrance published on the National Cathedral’s website, Hollerith also noted that Albright died during a time of war in Europe – a reality she was born into and fought to prevent from happening again.

“As Eastern Europe once again faces the ghastly reality of human suffering, we will miss her abiding commitment to peace for all of God’s children,” Hollerith wrote.

Funeral arrangements have not yet been announced.