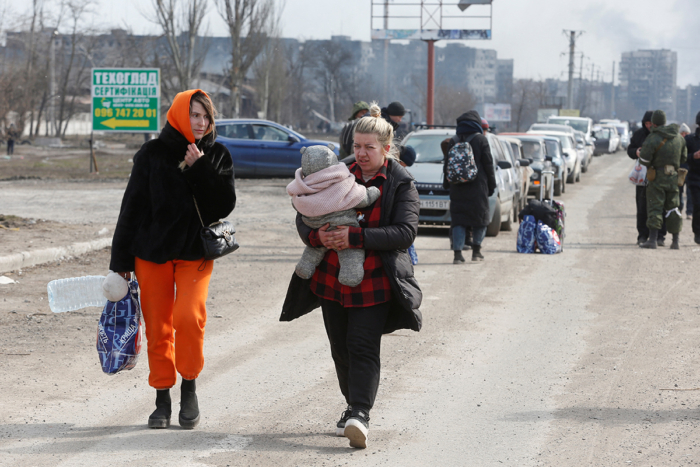 [Episcopal News Service] On March 24, President Joe Biden announced at a press conference in Brussels, Belgium, that the United States will accept up to 100,000 refugees fleeing the war in Ukraine. In response, Episcopal Migration Ministries, which helps resettle refugees in the U.S. as one of nine refugee agencies that work with the federal government, said it is ready to welcome them.

“Another brutal conflict has caused much suffering in Ukraine and an exodus of families seeking safety in neighboring countries,” Demetrio Alvero, operations director for Episcopal Migration Ministries, said in a March 24 statement. “With the announcement today that the United States government will assist in the resettlement of 100,000 Ukrainians, EMM will do its part, as it has for various persecuted refugees from across the world, to welcome them with the assistance of our partners, congregations and community groups.”

About 3.5 million people have fled Ukraine, and millions more are internally displaced, in what has become Europe’s largest refugee crisis since World War II. Most of the refugees are currently in Poland, Moldova, Romania and Germany. Russian forces invaded Ukraine on Feb. 24

In addition to helping Ukrainians and Russians through a range of legal pathways, including the U.S. Refugee Admissions Program, the U.S. announced on March 24 that it will provide more than $1 billion toward humanitarian assistance to support people within Ukraine and assist those affected by the impact of Russia’s invasion and an additional $11 billion over the next five years to ensure food security.

EMM has welcomed and resettled more than 100,000 refugees since the 1980s, and since 2014 has helped resettle 420 Ukrainians under a family reunification program that initially began in 1990 to resettle Jews from the former Soviet Union, according to the statement.

“Episcopal Migration Ministries continues to offer a ministry of welcome through refugee resettlement and the Neighbor to Neighbor program,” said the Rev. Chuck Robertson, canon to the presiding bishop for ministry beyond The Episcopal Church. “Since the 1930s, The Episcopal Church has responded faithfully to God’s call to offer compassion and support to the most vulnerable among us. It is our shared faith and ministry, and the support of volunteers and donors, that will allow us to continue resettling vulnerable populations, assist arriving Afghans, and respond to the crisis in Ukraine.”

Last year, the Biden administration raised the maximum number of refugees it would admit to 125,000 for the 2022 fiscal year. That total does not include evacuees from Afghanistan, who were admitted under special visa and parole programs.

Still, the administration says it may not need to raise the refugee ceiling in part because only 15,000 are on pace to be admitted this fiscal year, due to processing backlogs and pandemic restrictions, according to The Washington Post. In addition, many of the Ukrainians can come to the U.S. under the parole or family reunification programs, which are not counted against this cap. Those who have family in the U.S. will be among the first to come, Biden said.

To directly support EMM in its work with Ukrainian refugees, visit episcopalmigrationministries.org/give or text “EMM” to 41444 (standard messaging and data may rates apply). Make a note for your donation to support Ukrainian refugees. To donate by mail, send checks to DFMS-Protestant Episcopal Church U.S.; P.O. Box 958983; St. Louis, MO 63195-8983 (include Episcopal Migration Ministries – Ukraine in the memo line).