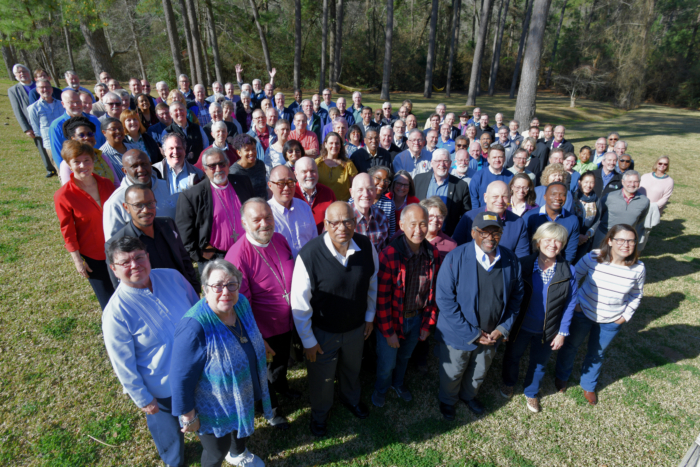 The House met in person for the first time since September 2019, with 133 bishops and bishops-elect present, at Camp Allen, a retreat center near Navasota, Texas, owned by the Diocese of Texas.

The Ukraine statement – written by the Rt. Rev. Mark Edington, bishop of the Convocation of Episcopal Churches in Europe, with input from other bishops – denounced the “utter depravity” of the Russian military’s assault on the former Soviet republic in moral and political terms.

“We are gathered at a moment of profound jeopardy to the principles of international law and peace,” the statement read. “As we meet and pray together as a House of Bishops, Ukraine — an independent, sovereign nation that has posed no threat to others beyond its borders — has been invaded by military forces of Russia, without provocation and without justification.”

In a referendum on Dec. 1, 1991, the statement noted, 90% of voters approved the declaration of independence from the Soviet Union that the Ukrainian parliament had issued in August of that year.

In an interview with Episcopal News Service, Presiding Bishop Michael Curry acknowledged the complex balancing act between the West’s support for Ukraine’s self-defense and the risk of escalating the conflict. 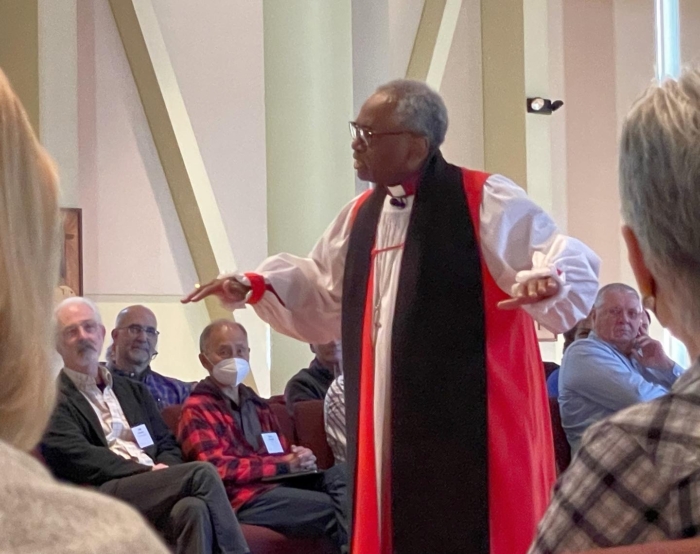 “[Ukrainians] have a right to defend their freedom and to protect it, and the rest of the world’s got to do whatever it can not to precipitate a worse war that will engulf the whole world, but to do everything possible to stand for human rights and decency. That’s not utopian thinking,” Curry said, also offering a comparison to the Gospel passage in which Peter draws a sword to defend Jesus.

“Jesus lived in the real world,” Curry said. “He had clear ideals and clear principles that he was articulating, no question about that. But he was in the world. Now, he did tell Peter, ‘Put that sword back in its sheath.’ But he didn’t tell him to get rid of it.”

Edington told ENS that Episcopal congregations are already seeing Ukrainian refugees in their cities. He is consulting with congregations, Episcopal Relief & Development and the Church of England’s Diocese of Europe, which has a church in Kyiv — Ukraine’s capital — and also in some of the cities where convocation churches are present.

In the meantime, Edington said, it was important for the bishops to speak out in unison against the invasion.

“We have a job to speak the truth as we see it, through the light of the Gospel, to say, ‘These things are wrong,’” Edington told ENS. “We chose to speak in terms of universal principles that we feel are connected to our Christian claim about the dignity of all people, and one of them is the right of nations to determine their own fate.”

By providing the historical context for Ukraine’s independence from Russia, the statement described the Ukrainian people’s self-determination as a fundamental right.

“There is a direct link between our baptismal covenant to respect the dignity of all people in Christ and the demand to respect the will of nations to determine their own destiny — the rule of ‘jus cogens,’ in international law — when expressed freely through the ballot box,” the statement read.

The statement denounced the “utter depravity of the war,” in which Russian soldiers have killed at least 900 civilians as of March 20, according to the United Nations.

“It is evident that Russian military forces have directly and indiscriminately attacked civilian residences, medical facilities, even agreed corridors for the humanitarian withdrawal of civilians in areas of combat,” the statement read. “These actions are a fundamental violation of the rights and dignity rightly accorded all people, and a flagrant breach of international norms.”

The statement echoed a resolution passed by Executive Council resolution in January, before the invasion, expressing “grave concerns about the escalation of tensions and military buildup along the border of Russia and Ukraine.”

All bishops present at the March 19 House of Bishops meeting approved the statement, in which they said they would pray for Russia to immediately cease hostilities; for the safety of refugees, diplomats and political dissidents; and for other churches to speak out in opposition to the invasion.

The House of Bishops also discussed the spate of state laws and political directives targeting transgender youth. Dozens of bills have been introduced in state legislatures over the past two years limiting transgender minors’ access to medical treatment and restricting their participation in sports. In some cases, the parents of transgender children have been threatened with legal action, as is now the case in Texas due to a directive from Gov. Greg Abbott classifying certain kinds of medical care, such as hormonal or surgical treatments, as child abuse.

Curry told ENS that while the war in Ukraine and anti-transgender laws are obviously very different issues, the bishops’ responses to them come from the same source.

“People can think ‘Love your neighbor as yourself’ can be trite and simplistic until you have to do it,” he said. “And that same principle that applies for transgender children applies for the people of Ukraine. They’re God’s children, and nobody, no human being is meant to be abused. Put down. Oppressed.”

Several bishops testified in support of a statement condemning these laws and directives, sharing personal stories about their own transgender/nonbinary relatives or parishioners and the fears that they face, even in states where they seem unlikely to pass. The resolution originally mentioned Texas “and other states,” but a number of bishops asked that their states also be mentioned by name. After some debate about how specific the statement should be, it was amended to include “Texas, Alabama, Arizona, Idaho, Iowa, New Hampshire, Michigan, Missouri, Florida, Arkansas, Ohio, North Dakota , Mississippi, South Dakota, Nebraska, Indiana, South Carolina and any other states, municipalities, and school districts targeting transgender children and their families.”

“In light of the baptismal covenant’s promise to see Christ in all persons,” the statement read, “… we … voice our love and continued support for all persons who identify as transgender or non-binary and their families. We decry legislative initiatives and governmental actions targeting trans children and their families. We urge all in our church to create safe spaces and shield all people from harassment based on gender identity.”

Curry and others said it was important for both lawmakers and the transgender people whose lives their decisions affect to know where the bishops stand.

“We don’t expect that it’s going to change votes, but we pray [it does]. Maybe the most important thing is if it brings some comfort, some affirmation to transgender folks, that you are children of God, created in God’s image and likeness, as are we all.”

Also during the meeting, the Rt. Rev. Whayne Hougland Jr., former bishop of the dioceses of Western Michigan and Eastern Michigan, was readmitted to the House after a yearlong suspension. Hougland had been suspended from episcopal ministry in June 2020 after admitting to an extramarital affair. Hougland’s suspension period ended in July 2021, and he resigned his position in both dioceses. Along with the suspension, Hougland completed the other stipulations of the disciplinary accord, including receiving counseling.

The Committee on Resignations reported that Hougland had “completely and generously and graciously fulfilled” the terms of the accord and proposed a motion to readmit Hougland to the House as a non-voting member, an action allowed under the House of Bishops’ Rules of Order, section V.M.4. The motion passed the House unanimously.

In addition, the House issued a pastoral letter calling for peace in the Holy Land and expressing that Jerusalem “must be equally protected and accessible to faithful Jews, Christians, and Muslims, and to all people of goodwill,” in accordance with 2018 General Convention Resolution B003. With that resolution, General Convention voted to “reaffirm its long-established position calling for the holy city of Jerusalem to be the shared capital of both the State of Israel and of a potential Palestinian state” and “urge the House of Bishops to disseminate as soon as is practicable a Pastoral Letter supporting Jerusalem’s prophetic identity as the Holy City of Peace.”