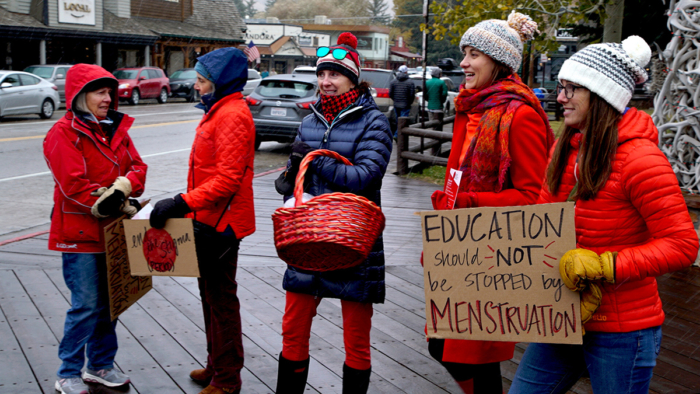 Pam Woodson, center, and others spend every National Period Day (Oct. 9) in Jackson Hole, Wyoming’s Town Square advocating for an end of period poverty and telling people about the Period Project run out of St. John’s Episcopal Church there. Photo: Courtesy of Pam Woodson

[Episcopal News Service] “Period poverty” is not a term routinely used in church to describe economic inequality, but now a growing number of Episcopal congregations are using it in their efforts to help low-income women and girls access menstrual hygiene products.

Twenty-three percent of students ages 13-19 struggled to afford menstrual products and 51% had worn such products longer than is recommended, according to “State of the Period 2021.” A separate survey of low-income women by the Journal of Obstetrics & Gynecology found that nearly two-thirds were unable to buy the tampons or pads they needed at some point in the previous year.

The indignity associated with inaccessible period products leads to missed school and missed work, and embarrassment and shame. Yet, the enormity of menstrual inequity, at least in the United States, often remains hidden.

Kenzie Blackwell founded the Episcopal Parish of St. John the Evangelist’s Free. ministry after having a “Mack Truck moment.” During a visit to a Boston-area nonprofit that distributes hygiene products to teenagers she saw a small pallet of supplies and asked organizers if they needed more. Yes, was the answer, they could not keep them in stock.

“The world shifted under my feet,” Blackwell said, as she heard that girls were missing school or dropping out because they did not have the period products they needed.

The Rev. Suzanne M. Culhane started the Tampon Trunk at St. Philip’s Church in Dyker Heights, Brooklyn, where she is priest-in-charge, after two mothers approached her on the street at the start of the pandemic asking for help buying tampons for their adolescent daughters, and then around Thanksgiving 2020, a third mother came to her parish requesting similar help.

“I knew we had to do something locally about it,” Culhane said. 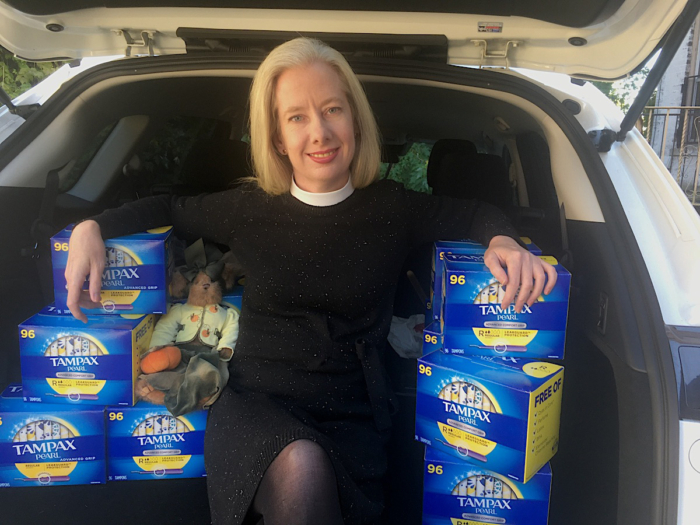 The Rev. Suzanne M. Culhane, canon for stewardship in the Diocese of Long Island, started the Tampon Trunk at St. Philip’s Church in Dyker Heights, Brooklyn, where she is priest-in-charge during the pandemic. Photo: Courtesy of Suzanne M. Culhane

Love, Period. at St. Paul’s Episcopal Church in Athens, Tennessee, grew from an adult education class about Bathsheba, whom King David saw bathing in what some believe was a mikvah for her monthly ritual cleansing, said Courtney Crittenden, St. Paul’s senior warden and chair of the project. Preparing to lead the discussion, she came across period poverty statistics and decided to raise the issue during the class.

The organizations work in somewhat different ways, based on their communities’ needs and which entities such as schools, jails, other churches, and food pantries are willing to partner with them. Using material and financial donations, and grants in some cases, such projects have given away hundreds of thousands of menstrual products.

The pandemic changed the landscape for many period poverty programs. “We’ve seen a drastic increase in the need for supplies during the pandemic,” Crittenden said.

In Brooklyn, the state-required supply of free tampons or pads at school stopped when New York City schools were closed, Culhane said. Supply chain issues sometimes prevent food pantries from having regular distributions and that means women who get their products there are shut out, she added. 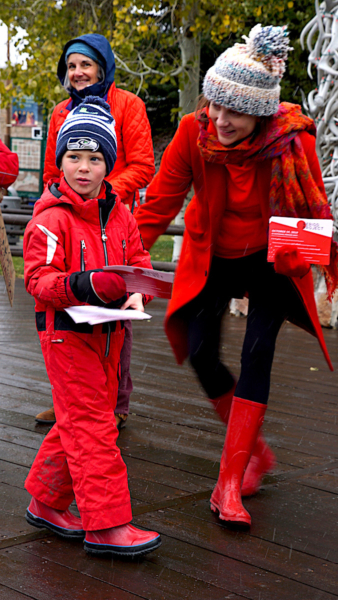 While reusable menstrual products might seem like a good solution, Culhane and others said they are often not a feasible answer for people without access to private washing and drying facilities.

Calculations of how many tampons and pads women use in their lifetimes vary widely, ranging from just over 9,000 to more than 16,000. Women spend $13.25 a month on menstrual products or $6,360 in an average woman’s reproductive lifetime (ages 12-52), one survey found. Part of the cost is the “luxury” sales tax that the majority of states charge for tampons, pads and liners. There is a growing movement to end the “tampon tax.”

People who receive federal assistance from the Supplemental Nutrition Assistance Program, or SNAP, and the Women, Infants and Children program, or WIC, program, cannot use that aid for menstrual products. Those restrictions, though, are slowly changing. For example, an Illinois law will allow people to buy period products with such benefits if the state gets a waiver from the federal government.

Blackwell, Culhane, Crittenden and others now made aware of the need all have had the same response: The church must act “because we are all God’s people and as Christ’s followers our mission is to love one another and love our neighbor as ourselves,” Crittenden said. “If we see a need,  why aren’t we trying tooth and nail to meet it?”

Organizers say such ministries are anchored in the Baptismal Covenant’s vows to seek and serve Christ in all people and respect the dignity of every human being. “It’s how you live your baptismal vows,” said Fran Lantz, a Houston-area Episcopalian who joined a project to sew kits of reusable menstrual products to donate across the world including in the United States.

The projects are not just a women’s ministry. Fathers, uncles, boys and husbands are supporters and volunteers. Pam Woodson, co-chair of the Period Project at St. John’s Episcopal Church in Jackson Hole, Wyoming, said the husband of one of the organizers is part of the “Tampon Team.” He refills their product baskets in the bathrooms of two grocery stores.

Male rectors lend their support, too, despite the taboo about speaking about periods in “mixed company,” especially in church. The Rev. Jimmy Bartz, St. John’s rector, joins the Tampon Team each year when it hands out products in Jackson Hole’s town square on National Period Day, Oct. 9.

“I never said the word ‘menstruation’ so many times,” said the Rev. Tim Schenck, St. John’s rector, recalling his support of Blackwell’s project in Hingham, Massachusetts.

Terminology is an important part of talking about menstruation and these projects. For instance, Love, Period. does not refer to the products they offer as feminine hygiene products or, in the case of pads, sanitary napkins. “We didn’t want to refer to the products in terms that seemed like menstruators were dirty from bleeding,” Crittenden said.

“We’ve become more inclusive in our language,” she said. “We say ‘menstruators’ or ‘period-having folks’ because we don’t want trans men or non-binary menstruators to think that they’re not welcome to come get products from us.”

Schenck said the church must continue to extend the welcome. “This is part of the church’s responsibility to take away the shame associated with this, but also to normalize it,” he said. “This is a basic biological function and so we should certainly be talking about it.”