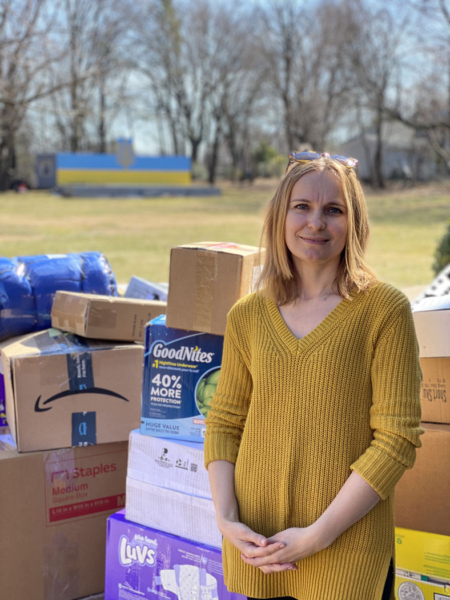 [Diocese of Newark] After Russian forces invaded Ukraine, “For the first few days I was numb and I was shocked,” said Lyubov Ferara, a Ukrainian-born parishioner of St. Elizabeth’s Church in Ridgewood, New Jersey. Ferara moved to the United States 20 years ago, but her mother and the rest of her extended family still live in a small town in western Ukraine.

“But then within probably a day or two or three I started calling. I couldn’t stay still and do nothing,” she said. She called people and organizations she knew in the local Ukrainian community, including the Ukrainian Orthodox church in Clifton, Holy Ascension Cathedral, which hosts the school where her two children take classes in Ukrainian language and culture.

“They said, ‘We are collecting humanitarian aid and here’s the list if you would like to collect or bring anything.’”

Later the same day, the Rev. Andy Olivo, rector of St. Elizabeth’s, contacted Ferara to check on her and her family. “He said, ‘If there’s anything we can do as a parish, please let us know.’” She told him about Holy Ascension’s aid collection effort, and Olivo called the priest there.

“I said, ‘St. Elizabeth’s would be glad to be a drop-off point. We can collect it all and bring it over to your church, where it’s being processed.’ He was really excited that we wanted to help him that way.”

A message to the congregation and posts on church social media announced that St. Elizabeth’s would begin collecting donations on Ash Wednesday. “At 10 o’clock, when the parish office opened, we had folks waiting outside the doors to drop off their donations,” said Olivo. “Literally every day the hallway outside of our offices was just overflowing with donations, and a team of folks would then come in at the end of each day and put it in trucks and take it over to Clifton to clear the hallways. And then the next day the church would open at 10 o’clock and we’d have folks waiting to bring things.”

Olivo noted that the donations came not only from St. Elizabeth’s members “but also folks who just saw the posting on social media and shared it with their friends.”

One Sunday afternoon, “someone from Norwalk, Connecticut, pulled up – she is Ukrainian-American and said she saw the post on Facebook and wanted to bring her donations in, and so she drove the hour-plus with her daughter to get here.

“It’s been amazing and inspiring and encouraging all at the same time – the folks who want to help.”

Ferara agrees. “It’s incredible how generous and how kind and big-hearted people are,” she said. “I cannot put in words the gratitude we have.”

The Ukrainian cathedral in Clifton is working with companies, such as Meest-America, that specialize in shipping between the U.S. and Central and Eastern European countries. Trained volunteers pack donations according to the shipping companies’ requirements. The goods are flown to Warsaw, then transported by truck over the Polish border into western Ukraine for distribution where they are needed.

In fact, the collection of medical supplies, baby supplies and other goods has been so overwhelming that on March 7, Holy Ascension stopped accepting donations of goods for the time being as they catch up with the donations they’ve already received.

“They never expected so many donations and so much support and help, so they need time to process it,” said Ferara.

Instead, those wishing to help Ukrainians are encouraged to make monetary donations to a relief organization. “No amount is too small,” said Ferara – a sentiment her 10-year-old son took to heart. Upon overhearing his parents discussing the cost of shipping donations to Ukraine, he brought out his piggy bank and dumped the contents on the table. Asked what he was doing, he replied, “I’m counting my money – I want to collect everything and donate it to cover the cost of shipping so these kids can get their clothes as soon as they can.” 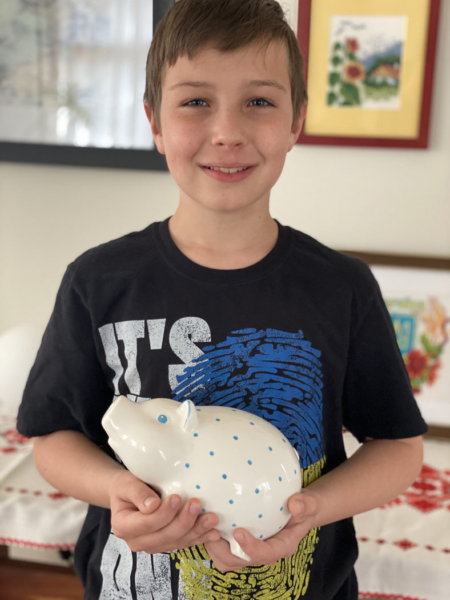 Lyubov Ferara’s 10-year-old son with the piggy bank he emptied to contribute towards aid for Ukraine. Photo courtesy Lyubov Ferara

“I just stopped and I cried,” Ferara said.

“I check with them daily, multiple times a day – thank God we still have communication – so I always check that they made it through the night, they’re alive, and we just keep praying that everybody’s safe.

Where you can donate

Episcopal Relief & Development, which is supporting Action by Churches Together (ACT Alliance) as it provides critical assistance to support people affected by violence in Ukraine.