[Episcopal News Service] Approval of The Episcopal Church’s triennial budget is one of the core responsibilities of General Convention, the church’s bicameral governing body. With less than four months until bishops and deputies meet July 7-14 at the 80th General Convention, church leaders are welcoming public input on the draft $101 million budget.

The biggest difference from past triennial budgets is that this budget will cover just two years. Because the pandemic forced postponement of the 80th General Convention from 2021 to 2022, Executive Council previously approved a single-year budget for 2022 and now is recommending the 2023-24 budget for consideration.

The proposed two-year budget is now under review by the Joint Standing Committee on Program, Budget and Finance.  The committee, which met online in October and February, is accepting written feedback online through April 8. An online public hearing will be scheduled for early May, followed by an in-person committee meeting later in the month.

“We want the church to have an opportunity to give us feedback,” said the Rev. Mike Ehmer, the Program, Budget and Finance chair. “We will guarantee somebody from our committee will give you a personal response.”

Ehmer noted in an interview with Episcopal News Service that this budget contains a significant change in how the church would calculate the assessments that dioceses pay to support churchwide operations. In the past, dioceses have been assessed at a rate of 15% of their operating income, with the first $140,000 of income exempted. The proposed budget would raise that exemption to the first $200,000 in income.

The difference may seem insignificant for larger dioceses with multimillion-dollar budgets, but “to small dioceses it’s a lot,” said Ehmer, who serves as canon to the ordinary in the Diocese of Northwest Texas. 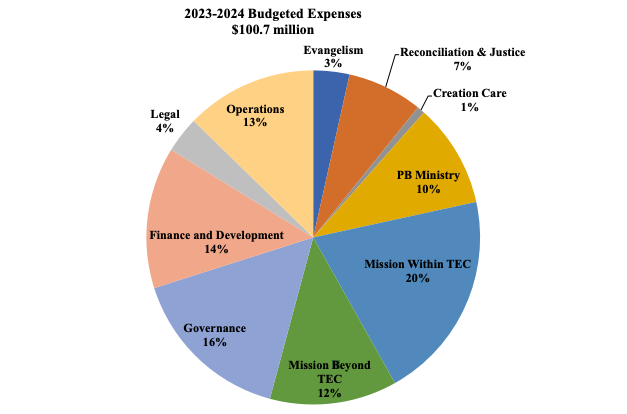 The postponement of the General Convention was one reason the church ended the 2019-21 triennium with a surplus of more than $15 million, of which about $2.5 million was shifted to the 2022 budget to cover the expense of gathering this year in Baltimore, Maryland. Expenses were further reduced during the pandemic because of restrictions on staff travel and in-person gatherings, and the church also received $3 million as one of the many U.S. employers that qualified for assistance from the federal Paycheck Protection Program.

Church leaders don’t expect the annual surpluses to continue, so they asked departments of the Domestic and Foreign Missionary Society, The Episcopal Church’s corporate entity, to look for ways to cut 5% from their budgets while maintaining churchwide staffing at 152 employees.

On Jan. 27, Executive Council voted to use up to $5 million from the past triennium’s surplus to balance the proposed 2023-24 budget that it sent to the Joint Committee on Program, Budget and Finance. Council is still deliberating over what to do with the remaining surplus, a topic it will take up at its April meeting in San Juan, Puerto Rico.

Program, Budget and Finance’s 27 members are appointed by the presiding bishop and president of the House of Deputies, with one bishop and two deputies chosen from each of the church’s nine provinces. After reviewing and seeking input on Executive Council’s budget proposal, it will present a final draft for consideration and approval before a joint session of the 80th General Convention.

Separate from the financial discussions, the 80th General Convention will consider resolutions that seek to simplify the church’s budgeting process while maintaining transparency and improving continuity and efficiency. The Task Force on the Budget Process developed the plan to address what it concluded was the redundant and wasteful expense of enlisting members of the Joint Committee on Program, Budget and Finance to review details of a budget that already had been developed and thoroughly debated by Executive Council and its Finance Committee.

The Task Force is proposing, in resolution A048, to eliminate Program, Budget and Finance and instead empower Executive Council to present its budget proposal directly to General Convention.

Executive Council still would have the authority during each triennium to make further changes to the budget as necessary through its authority as the church’s governing body between meetings of General Convention.

The task force argued in its report that “streamlining the budget process so that one entity, broadly representative of the church, is responsible for the whole of the budget development process will be a better use of human and financial resources with less duplication of efforts. It will also allow for clarity in communications.”