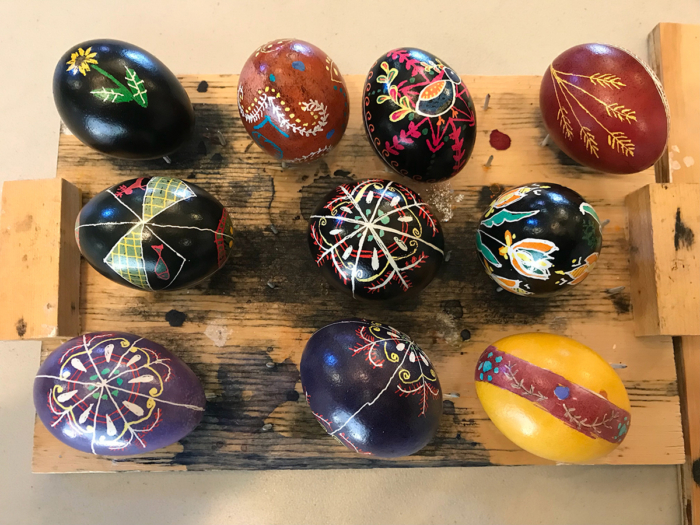 Finished pysanky made by students who participated in Dontie Fuller’s Ukrainian Easter egg decorating class on March 12 at Church of the Nativity in Indianapolis, Indiana. Photo: Dontie Fuller

[Episcopal News Service] When Russia invaded Ukraine just before the start of Lent, many Episcopalians began praying for the Ukrainian people. The attacks prompted Dontie Fuller, who was already scheduled to teach the art of pysanka – Ukrainian Easter egg decorating – at Church of the Nativity in Indianapolis, Indiana, to amend her informational event to educate attendees about the attacks and to use the ancient art to offer hands-on prayer for Ukraine.

“This is my first time teaching Ukrainian egg decorating at Church of the Nativity, but now it seems rather poignant this year to be doing this,” said Fuller, a retired youth ministry coordinator and Christian formation director in the Diocese of Indianapolis. Thirteen people attended Fuller’s pysanka event on March 12.

Russian forces invaded Ukraine on Feb. 24, in an ongoing conflict that has killed more than 560 civilians and driven 2.8 million refugees to flee the former Soviet republic. Russian attacks have leveled cities and towns across Ukraine, creating an ever-growing humanitarian crisis. 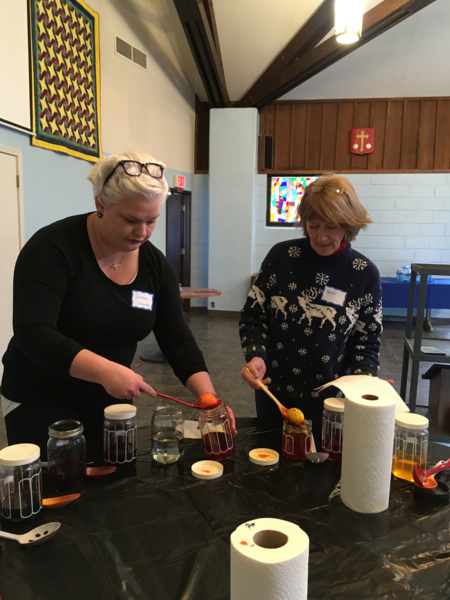 Participants in Dontie Fuller’s pysanka class learned to make Ukrainian Easter eggs using a traditional wax-resist method on March 12 at Church of the Nativity in Indianapolis, Indiana. The eggs are dipped in different-colored dyes from lightest to darkest with melted beeswax applied between layers. Photo: Dontie Fuller

“I’m struck by the courage and the determination of the people in Ukraine. I cannot fathom being a mother with small children and having to leave my husband behind to fight for the country, but then take my children someplace where it’s safe,” said Helen Byler, a parishioner of Church of the Nativity who attended the event. “The timing of the egg event and the war is really eerie. Making pysanky can be used as a form of prayer, and prayer’s powerful and it’s something that can bring us all together. I will be praying intently for the Ukrainian people this Lenten season.”

According to Fuller, who has been making pysanky (plural form of pysanka) for 35 years, pysanky are made using a wax-resist dye method, which requires the eggs to be dipped in different-colored dyes from lightest to darkest with melted beeswax applied between layers with a design tool called a kistka. The beeswax preserves the color underneath when dipping the eggs in new colors. Once the designs are complete, the wax is melted and scraped off, revealing the final designs.

Pysanka art originated from Ukraine’s pre-Christian era when eggs were decorated in early spring as symbols of Earth’s rebirth. When Christianity was introduced to Ukraine in 988, making pysanky turned into an Easter gift-giving tradition that includes customizing eggs for loved ones and praying for them throughout the dyeing process. Christian symbols are common motifs in pysanka art.

“As the wax melts off and you watch this amazing transformation, it’s like a butterfly emerging from a chrysalis. It’s an absolutely fascinating process,” said Byler, who grew up in the Romanian Orthodox Church and joined The Episcopal Church in 1986. “It’s like waiting for the resurrection of Christ, like going from Good Friday to Easter morning is the best way I can describe it.”

Parishioner Colleen Patrick signed up to learn the art of pysanky when she learned that the egg decorating process can be a hands-on source of prayer.

“Prayer for the Ukrainian people right now, I feel, is extremely important because God can work miracles; and if we pray for their health and for their safety and their well-being and for all of this to end quickly, I believe that God can truly do anything,” Patrick said. “There’s all kinds of charity work going on, humanitarian efforts we can donate to and figure out if there’s anyone local and families you can directly help.”

Fuller said she isn’t one to get political, but she hopes that peace prevails over aggression. “I feel helpless, but prayer is one thing we can do,” she said.