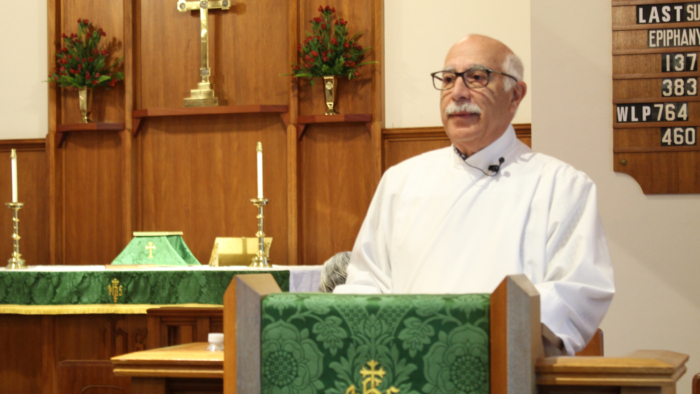 [Episcopal News Service] If you attend Episcopal worship services and assume the preacher always wears a clerical collar, consider lending your ear to Salem Saloom on a Sunday morning. As a lay preacher in the Diocese of the Central Gulf Coast, he might broaden your expectations.

Saloom, 74, is licensed by the diocese and typically preaches once a month at St. Stephen’s Episcopal Church in Brewton, Alabama, where he has worshipped since 1979. Although he never attended a seminary, Saloom completed a lay preaching course through the diocese’s School for Ministry and now is participating in the two-year test phase of a churchwide curriculum developed by the Episcopal Preaching Foundation.

The experience has been “really enlightening,” Saloom told Episcopal News Service. To him, writing and delivering a sermon means “trying to find the way to make the Gospel come alive, and preach so that the listeners in the congregation can see how alive the Gospel is in their daily lives.”

As an increasing number of Episcopal congregations forego full-time clergy and lay members take on more parish responsibilities, some dioceses are encouraging lay people to bring their voices to the pulpit. “Dioceses are recognizing the value of lay preaching,” said the Rev. Charles Cesaretti, president of the Episcopal Preaching Foundation, though he noted the phenomenon has old roots. “Lay preaching has always been in the church. It starts in the book of Acts, so it’s in our DNA.”

Central Gulf Coast, which includes southern Alabama and part of the Florida Panhandle, is one of six dioceses that were selected to test the Episcopal Preaching Foundation’s new lay preaching curriculum. The other dioceses are East Tennessee, Lexington, Minnesota, Nebraska and North Carolina.

For its initial phase in 2021, the foundation developed a program to train the trainers and began getting the word out to dioceses. Sixteen applied to test the curriculum, and each of the six finalists recruited two trainers and formed a cohort of about six students.

Last January, the dioceses’ trainers began guiding their cohorts through all aspects of preaching, from close examination of Scripture to effective use of body language during sermons. By the end of this first year and throughout the second year, most of their time will be spent writing sermons, preaching to their peers and receiving feedback.

The curriculum “is brilliantly created. It is inviting and very spirit-filled,” said Jenny Beaumont, one of the two lay preaching trainers in the Diocese of North Carolina, where she serves as missioner for adult formation and lifelong learning. In an interview with ENS, she described a range of weekly assignments that participants complete on their own, such as watching videos and writing reflections. Then the group meets twice a month, once on Zoom and once in person.

They discuss how to parse the meaning of religious texts, and they practice reading their writing out loud. “It really is helping people to reflect on their lives and their walk with God and how they can bring their voice to that journey,” Beaumont said.

Lay leadership development and lay preacher courses are expanding against a backdrop of declining church membership and attendance, trends in The Episcopal Church that mirror what is happening in other mainline Protestant denominations. At the same time, parish leadership is changing. Data compiled by the General Convention Office shows that the number of parish priests in full-time positions declined from nearly 60% in 2010 to about 54% in 2020.

The Episcopal Preaching Foundation received $400,000 in grants from Trinity Church Wall Street in New York to launch its Lay Preaching Training Initiative. Trinity Wall Street aims to help all people of faith “develop their leadership skills so they can be effective in their work in ways that are truth to their faith,” said Rob Garris, managing director of the church’s Leadership Development Initiative.

The goal isn’t to fully replace clergy, Garris told ENS, but rather to prepare and empower lay leaders to take on greater responsibilities in the church. “We’re finding different ways to engage people rather than have them be passive recipients of programing,” he said.

For most of its 34-year history, the Episcopal Preaching Foundation has sought to raise the standards of preaching in The Episcopal Church by working with seminaries and dioceses to enhance training of seminarians and priests. Now, the time is right to expand that scope beyond clergy, said the Rev. Stephen Smith, a priest in the Diocese of Southern Ohio who is coordinating the Lay Preacher Training Initiative.

“Both the interest and the need are meeting right now,” Smith told ENS. Rural dioceses, in particular, have expressed a need for training lay preachers to assist in small congregations that don’t have full-time priests, Smith said, and churchwide, lay leaders have shown a willingness to step up and help guide congregations through the upheaval of the past two years. Some see preaching as a fulfilling new ministry opportunity.

Congregations also benefit from hearing a diversity of perspectives from the pulpit, Smith said, not just sermons by bishops, priests and deacons. “The lay person preaches to talk about the role of the Gospel in everyday life.”

In the Diocese of the Central Gulf Coast, preaching is one of three tracks, in addition to worship and pastoral care, that lay people can choose when attending the 10-month lay leader program offered by the School for Ministry. The diocese launched the program in 2020 and graduated 24 lay leaders in its first year, including 10 in the preaching track. This year, nine of 20 students are completing the preacher training.

“We realized that lay people have something to say to one another, especially when we’re going through something as big as a pandemic,” said the Rev. Joy Blaylock, dean of the School for Ministry and diocesan missioner for discipleship. “Sometimes the lay voice can speak outside the institution.”

The Episcopal Preaching Foundation’s curriculum is longer and more intensive than the School for Ministry’s program, but both will culminate in participants being licensed to preach in the diocese, with approval of Bishop Russell Kendrick.

Even before the pandemic, some of the diocese’s congregations were struggling to recruit, pay and retain permanent priests. A third of the diocese’s 62 churches don’t have full-time clergy, Blaylock told ENS, so training lay people can make a big difference locally. And lay preachers “just have a whole different perspective to bring that sometimes enlivens and gives hope in a totally different way, in a beautiful way,” she said.

On Feb. 27, the lectionary’s appointed Gospel reading was Luke’s account of Jesus’ Transfiguration. After the reading, Saloom stepped up to the pulpit at St. Stephen’s and began his sermon by invoking fond memories of hunting.

“In about three weeks, spring turkey season will open in Alabama,” Saloom began his sermon, which was livestreamed on Facebook. He recalled the sensations of walking into the woods as dawn approached, the sounds and smells of wildlife around him, the feel of the cool air, the sight of the brightening sky.

It is “a magic transformation,” Saloom said. “A transformation from darkness into light awakens the world. And one literally feels God’s presence touching one’s spirit.” Jesus may not be revealed to us as the son of God with the same drama that the apostles experienced, he said, but our everyday moments can be revelatory if we open ourselves up to the Holy Spirit.

“That light is in you and reflected in creation,” Saloom said. “It’s about listening to God’s voice.”

In addition to serving his church, Saloom is a surgeon, a tree farmer and a lover of the outdoors. He told ENS that he draws on those experiences when he writes a sermon. “I think that everybody, no matter ordained or lay, brings something special to the table, and it’s got to be from your own experiences and your own way of doing things.”

Not everyone may feel comfortable standing before a congregation and preaching, but Saloom said he feels a personal calling to this ministry. “Everyone has a ministry, whether they know it or not, and preaching may be one of those ministries,” he said.