EDITOR’S NOTE: Reporter David Paulsen volunteered on the advisory panel that helped suggest some of the questions that Episcopal Pulse is using in its first round of surveys.

[Episcopal News Service] What if Episcopalians and Episcopal leaders could get data on the state of the church and its congregations nearly in real time as they grapple with some of the biggest challenges of the day, from navigating the pandemic to confronting racial injustice?

That is the idea behind Episcopal Pulse, a mini-survey experiment backed by TryTank Experimental Laboratory and developed by the FaithX Project. They launched the surveys in January with more than 1,000 people receiving weekly questions by email. The developers have been encouraged by the initial response rate; about 500 to 600 participants are answering the questions each week.

“This is a crucial thing to be able to do,” said the Rev. Ken Howard, executive director and founder of FaithX, a nonprofit consulting firm. “The church is horrendously handicapped by its traditionalist point of view about things. We don’t like change very much, and we’re not very agile.”

As its name suggests, Episcopal Pulse aims to regularly take the pulse of the church. Its surveys are designed to require no more than two minutes to complete and often are centered on a single question, yet they still produce bits of statistically significant data and analysis – in a fraction of the time and effort it would take large polling agencies to conduct more robust surveys.

“What if we could think of evangelism not as pressuring someone to convert, but simply as living our relationship with Jesus out loud among our neighbors,” FaithX said in an online analysis of the data. “If we did, we might get a little more traction in the evangelism department.”

This kind of instant feedback is ever more value as The Episcopal Church looks to the future after two years of pandemic disruption, Howard told Episcopal News Service. “We figured, if we can begin to get people grounded in data, get a sense of reality into the decisions that they’re making – as opposed to doing it at an intuitive level, a gut feel or based on their own biases – that could be a real improvement.”

TryTank, a joint initiative between Virginia Theological Seminary and General Theological Seminary, has invested $7,500 in the experiment, to hire FaithX and enlist an additional web developer. Starting in 2021, FaithX recruited volunteers who would be a representative demographic cross-section of The Episcopal Church. The group tends to skew more toward ordained clergy but also includes laity, as well as people involved in The Episcopal Church at the parish, diocesan and churchwide levels.

Anyone interested in becoming a survey respondent can apply online. TryTank and FaithX are sharing some of the data within their own circles but not yet releasing Episcopal Pulse results more widely, partly because the surveys are still a work in progress.

“It’s been a real learning experience,” Howard said. “We’ve had some things that we’ve had to adjust.”

One example was the second Episcopal Pulse survey. It initially asked respondents what they expected attendance to be at in-person worship after the pandemic is over. FaithX canceled that survey in the middle of accepting responses, so it could follow up with a modified survey the following week that paired the in-person attendance question with a question about online worship trends.

That survey received 558 responses and suggests Episcopalians are somewhat optimistic about the future of in-person worship, with 86% predicting the return of at least a majority of parishioners. The online worship question generated inverse results, with 77% of respondents predicting that online attendance will be cut at least in half once people can fully worship in person again without worrying about the pandemic.

“Is this too optimistic” for in-person worship, Howard wondered to ENS, “and is the online worship too pessimistic?” Some people across the church may be “overlooking online worship as an ongoing real activity that has positive evangelistic and outreach points to it,” he said. 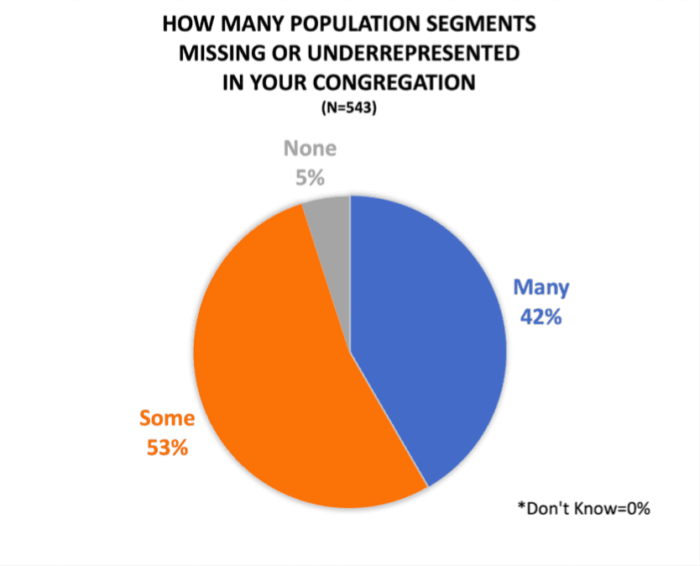 “We didn’t think [the perceived gap] would be that high,” Howard said.

Congregations’ online worship and lack of diversity are topics that likely will be mined further in follow-up questions. That is another anticipated benefit of Episcopal Pulse’s mini-surveys. The latest results can guide future inquiries, sometimes on short notice if the church needs quick data on a pressing issue.

This trial phase of the Episcopal Pulse surveys is scheduled to last six to nine months, until FaithX has “worked all the bugs out,” Howard said. After that, TryTank hopes to roll it out more widely as a churchwide resource.